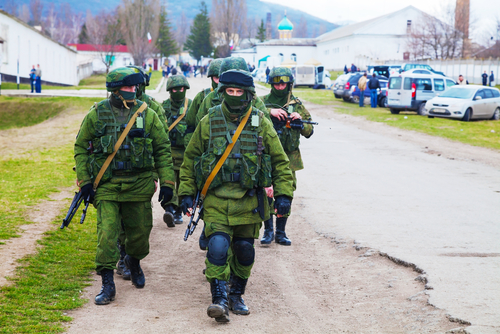 Ukrainian President Volodymyr Zelensky said last week that the conflict with Russia will only end after Kyiv liberates Crimea, which was annexed by Moscow in 2014.

Zelensky’s comments came as mystery explosions occurred at a Russian air base in Crimea that raised the possibility that Kyiv was expanding its war effort with a focus on reclaiming the peninsula.

“Crimea is Ukrainian, and we'll never give up on it,” Zelensky said, adding that Kyiv is “constantly adding new components to the formula of liberating” the area.

The Trends Journal has long reported on the tense history between Russia and Ukraine over Crimea, which is a popular vacation destination for Russians. (See “PURE PROPAGANDA,” “NO, RUSSIA DID NOT INVADE CRIMEA,” “BAITING THE BEAR IS BECOMING A DANGEROUS GAME” and “BIG LIE? RUSSIA TAKES MORE LAND BUT RETIRED U.S. GENERAL SAYS RUSSIA WILL LOSE.”)

Reports said the Russian military lost nine combat aircraft in the explosions at the Saki Air Base in Novofedorivka. The New York Times, citing satellite photos from Planet Labs, said the planes were parked on the base’s western tarmac, at each plane is worth 10s of millions of dollars.

One Ukrainian official told the paper that the cause of the blasts was due to attacks carried out by pro-Ukrainian forces.

The Ukrainian military did not acknowledge any involvement. Russia claimed the explosions were accidental and no planes were damaged. The Crimean health ministry said one person was killed and 14 were injured. Eyewitnesses said they heard 12 blasts.

The Cavell Group, a risk and crisis firm, told CNN that given the sizes of the craters, the explosions could have been caused by a Ukrainian special forces attack or pro-Ukrainian fighters. Cavell said it is most likely that modified ballistic cruise missiles were launched by Ukrainians.

A Ukrainian official told The Washington Post that the strike at the base was carried out by special forces.

TRENDPOST: Kyiv has good reason to deny any involvement because Moscow could consider the strike an attack on Russia. Dmitry Medvedev, the deputy chairman of the Security Council of Russia, warned last month that “Judgment Day will instantly await” for anyone who targets the peninsula.

The BBC reported that Zelensky’s latest remarks on Crimea are in stark contrast to what he said at the beginning of the war. He said earlier that Ukraine could accept a peace deal if Russian forces returned to their pre-invasion positions.

Zelensky now says, “This Russian war against Ukraine and against the entire free Europe began with Crimea and must end with Crimea—with its liberation."

“Crimea is Ukrainian, and we will never give it up,” he said.

TRENDPOST: Russia did not attack Crimea in 2014. The Russian military already had a presence there. Under a lease agreement (which did not expire until 2047), negotiated when Russia granted independence to Ukraine, its Black Sea Fleet is based at Sevastopol port in Crimea.

Furthermore, Crimea would likely still be a part of Ukraine if the U.S. had not orchestrated a coup to overthrow the government of the democratically elected president of Ukraine, Viktor Yanukovych. (See “WASHINGTON IS DRIVING THE WORLD TO THE FINAL WAR,” 28 Apr 2014).

It was Crimean’s who voted overwhelmingly—by 95 percent—to rejoin Russia, but it is internationally recognized as Ukrainian territory. The Kremlin sees Crimea as theirs.

Crimea had been part of Ukraine only since 1954, when Soviet Premier Nikita Khrushchev, a Ukrainian, designated it as such. In fact, Crimea has been part of Russia longer than the United States has been a country.