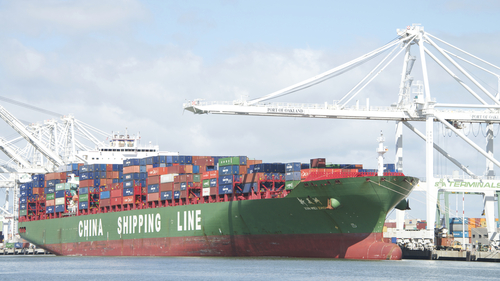 China exported nearly $326 billion worth of goods and services in November, a record, and imported $254 billion to satisfy its roaring demand for fuel and metals, Bloomberg reported.

Imports shot up 30 percent compared to a year earlier; exports climbed 22 percent in dollar terms, with both expanding more than analysts had expected.

The world continues to show strong demand for Chinese factories’ output, a demand that could grow if COVID’s Omicron variant leads to renewed shutdowns elsewhere around the globe.

“The surprise in import growth was driven by a rebound in commodity volume, probably reflecting improving infrastructure demand as local governments stepped up stimulus toward the turn of the year,” she said

In November, the value and volume of coal imports reached a high for the year and natural gas imports were the greatest since January. Crude oil imports notched a three-month peak.

TREND FORECAST: As we have long been reporting, when China was granted permission to enter the World Trade Organization in 2001, European and American manufacturers gave the third-world nation at the time the most advanced industrial production and hi-technology processes, so they could manufacture in China using cheap labor and sell it abroad at marked-up prices to make greater profit margins.

Now, 20 years later, having been given the keys to the manufacturing and hi-tech vaults, China has what it needs to excel in those areas without foreign nation input.

And while America and Europe have outsourced their manufacturing to China and developing nations to increase profit margins, China’s dual circulation/self-sustaining economic model is directed toward keeping jobs and trade and profits within the nation, thus relying less on global trade.

China’s yuan has rocketed to multiyear highs against the dollar and other major currencies, driven by demand for China’s exports and the country’s new openness to foreign investors.

The yuan has gained two percent against the dollar this year and was trading at less than 6.35 to the buck at one point last week, data service Refinitiv reported.

At the same time, the CFETS-RMB index, which measures the yuan against an assortment of major currencies, notched its highest mark since 2015.

The 2020 global economic shutdown sent demand for Chinese goods soaring, while also keeping its tourists at home, resulting in a huge trade surplus.

That imbalance continues: last month, China’s exports totaled a record $325.5 billion, 22 percent more than a year earlier, according to the country’s General Administration of Customs.

At the same time, China’s cash balance was $203 billion, government figures show, the greatest since 2015.

Exports have been the main engine of China’s economic growth since mid-2020, according to a Nomura research note.

Manufacturing, especially for export, has fueled China’s GDP while the country nurtures its still-modest consumer economy and deals with its faltering real estate market, which has accounted for up to 30 percent of GDP recently.

The stronger the yuan, the more those exports cost abroad.

Those higher prices could cut demand for Chinese goods, hampering the country’s economic growth and leaving it vulnerable to financial damage from the latest COVID surge and negative undercurrents circulating in the world economy.

China’s economy grew by 4.9 percent in this year’s third quarter. We maintain our forecast that yearly growth will be near 8 percent.

TREND FORECAST: China will do what it can to keep the value of the yuan down so its exports will be more affordable. On 9 December, the People’s Bank of China raised the proportion of foreign currency reserves that commercial banks are required to hold, from 7 percent to 9 percent.

The move takes foreign capital out of circulation and is meant to slow the yuan’s rise.

The bank last boosted the requirement last May, the first time it had done so in more than a decade.

On 9 December, Fitch downgraded the troubled real estate giant’s credit rating to “restricted default,” meaning that the company has failed to meet its financial obligations.

The downgrade came after Evergrande missed payment deadlines earlier in the week on two dollar-denominated bonds. The $82.5 million in payments were a month late and the grace period ended 6 December with no action by the company.

Evergrande has been struggling with $300 billion in debts, as we first reported in “China’s Real Estate Market Teeters on Evergrande’s Debt” (21 Sep 2021).

In a 10 December regulatory filing, the company warned it might not have enough liquidity to meet its obligations and would “actively engage” with foreign creditors to restructure its debts.

Xu Jiayin, Evergrande’s founder and chairman, reportedly has sold $1.1 billion worth of his personal assets to bail out his company, apparently to no avail.

As one of China’s largest developers, Evergrande’s troubles threatened to stagger the country’s real estate market, which recently has accounted for as much as 30 percent of China’s GDP. (See “Will Evergrande Dive Crash Chinese Markets?” 5 Oct 2021.)

So far this year, Evergrande’s stock has lost 87 percent of its value, including a 20-percent plunge on 6 December alone.

Evergrande’s mess will be handled in a market-oriented way, Yi Gang, governor of the People’s Bank of China (PBOC), said in a statement, indicating that neither the bank nor the government is planning to write a check to cover Evergrande’s debts and cited the company’s “own poor management” and “reckless expansion” for its troubles.

However, in part to contain damage from Evergrande’s default, the PBOC is lowering requirements for banks’ cash reserves, which has helped to reassure markets, CNBC noted. (See related story in this issue.)

TREND FORECAST: While there is concern that the Evegrande crash will crash China’s real estate market, we disagree. The government is in full control and will take necessary measures to keep the economy propped up and avert a real estate collapse.

Again, while real estate prices will soften, it should be noted that the size and strength of the Chinese real estate boom over the past 30 years is unprecedented in modern history.

CHINA INJECTS $188 BILLION INTO ITS ECONOMY

The People's Bank of China will cut the reserve requirement ratio for most commercial banks by half a percentage point on 15 December, freeing about 1.2 trillion yuan, or $188 billion for new loans to businesses and households.

The announcement of the second such reduction this year accompanied the government’s statement that "ensuring stability" would be a priority in 2022 and regulators would take additional steps to protect the economy.

"In other words, top leaders are deeply concerned about the risk of potential instability," Larry Hu, chief China economist with Macquarie Group, said last week in a research note.

The policy moves were widely seen as responses to the default of Evergrande Group and Kaisa Group, two major Chinese real estate developers that failed last week to make required payments on bonds. (See related story in this issue).

This year also has brought China floods, power shortages, and a global supply chain crunch, all of which have bollixed the economy, disrupted output, and slowed growth.

Regulators’ harsh crackdown on tech companies and, to a lesser extent, financial firms also has stirred concerns among global investors.

The new policy of looser cash "suggests[s] that the priority has shifted from regulatory tightening to supporting growth," Hu noted.

It has not reduced interest rates since early in 2020, has dumped little stimulus money into markets generally, and instead has given support to small businesses hardest hit by the COVID War.

TRENDPOST: China’s decision to make more cash available in its economy, following more than a year of a hands-off policy, indicates that China’s leaders recognize their economy is slowing because of new COVID WAR mandates at home and abroad.

The cash infusion is aimed, in part, to continue to fertilize the consumer economy under the country’s “dual circulation” policy, which we outlined in “China Announces “Dual Circulation” Economic Policy” (9 Sep 2020), so the nation is less reliant on exports.