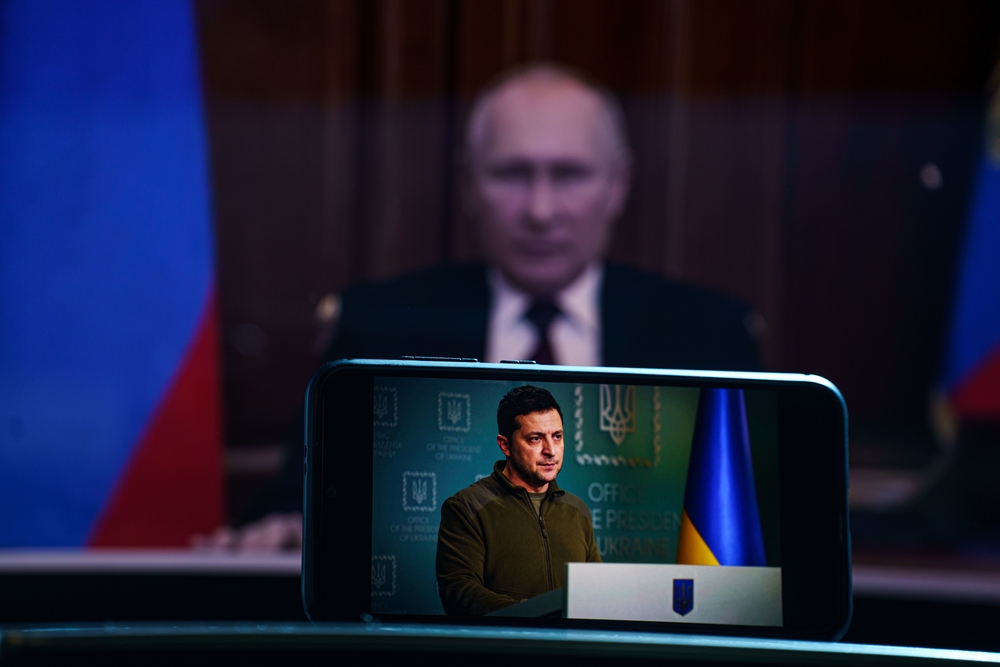 Last Wednesday, Ukrainian President Volodymyr Zelensky addressed Congress to give an update about his country’s war with Russia, appealing for more help, and invoking some of the worst tragedies on U.S. soil in an apparent effort to tug at the heart and money strings of the public.

Zelensky, who appeared in a video link from Kyiv and spoke through a translator through most of the address, told Congress, “In the darkest time for our country, for the whole of Europe, I call on you to do more.”

Zelensky, a former comedian who played president of Ukraine before becoming the nation’s official president, played to his congressional audience.

He told U.S. politicians that Ukraine was suffering a 9/11 and Pearl Harbor every day. He even invoked Martin Luther King’s “I Have a Dream” speech and said, “I have a need. I need to protect the sky.”

“Is this a lot to ask for to create a no-fly zone over Ukraine to save people?” he asked. “Is this too much to ask?”

He told members of Congress that if they were trepidatious about enforcing a no-fly zone, which Russia would consider an act of war, another option would be to pump the country with more weapons and hit Russia with more sanctions.

TRENDPOST: Gerald Celente, the publisher of the Trends Journal, accused Zelensky of prolonging the war that will lead to more deaths and punishment inflicted from the more-powerful Russian army.

He took to Twitter last week to point out that Napoleon sent 420,000 "brave" young men to defeat Russia and 410,000 were killed. He also pointed to Hitler’s Operation Barbarossa campaign that resulted in the deaths of 27 million Russians, who still ended up defeating Germany.

“You think Biden & NATO can beat Russia? Stop the senseless murder!” he posted.  And Mr. Celente is among the very few calling for peace, and for nations to stop sending military armaments to Ukraine and end the needless death and destruction.

A recent Pew Research survey found that about 47 percent of Americans approve Biden’s handling of the invasion and 39 percent disapprove. The number is the direct result of the constant barrage of media hatred for Russians and Vladimir Putin.

Zelensky has been praised in Western media as the second coming of Winston Churchill. He is seen as a leader hunkered down with his troops fighting for freedom against a much larger and determined aggressor.

Kyiv and Moscow have been unable to end the war diplomatically, but the longer the war drags on, the larger the humanitarian crisis. As of last Friday, three million Ukrainians have fled the country. Most men of fighting age have been forced to stay.

“I’m ready for dialogue; we’re not ready for capitulation,” Zelensky said in an interview with ABC News.

Yuri Vitrenko, the CEO of Naftogaz, the country’s largest state-owned oil and gas company, told The Washington Post that Ukrainians have been suffering since the war broke out last month. He said Zelensky’s delegation has felt some pressure to show there’s been some progress in the peace talk.

“There are people in Ukraine who say ‘we don’t want to hear about talks, we want to fight until the end.’ But others are saying ‘at least try to negotiate.’ That’s why for the negotiating team, it’s important to be constructive,” he said.

TRENDPOST: Zelensky received a standing ovation before uttering a word and then played a video of some of the war casualties. The media—as forecast—presented Zelensky as a historic figure on the level of Winston Churchill.

The Wall Street Journal described the scene inside the theater: “Audible gasps and sighs were heard at the sight of the children. Sen. Angus King (I., Maine) said there was a “collective holding of the breath” in the auditorium.

“The video was a masterstroke of showing the reality on the ground,” said Rep. Jim Himes (D., Conn.). “Very moving.”

Russia wants Ukraine to become neutral and not try to become a full NATO ally, and Ukraine would need to disarm so it is no longer seen as a threat to Russia.

The BBC reported that it is also believed that Russia wants Kyiv to give up territory in eastern Ukraine and accept that Crimea belongs to Russia.

Zelensky's address lasted for 15 minutes and members of Congress gave the comedian a standing ovation.

Secretary of State Antony Blinken, the top diplomat in the U.S., said Thursday that he did not believe Russia’s goal is to find a diplomatic solution and that the war in Ukraine will drag on.

“From where I sit, diplomacy obviously requires both sides engaging in good faith to de-escalate,” he said, according to the Financial Times. “The Actions that we’re seeing Russia take every single day, virtually every minute of every day, are in total contrast to any serious diplomatic effort to end the war.”

Liz Truss, the British foreign secretary, told The Times of London that Russia has not put any serious offers on the table and she believes Putin is using these negotiations as a “smokescreen” while his forces on the ground regroup.

Ibrahim Kalin, a chief adviser and spokesman for Turkish President Recep Tayyip Erdogan, said Putin is not ready to meet with Ukrainian President Volodymyr Zelensky—despite the latter calling for a meeting on Saturday.

A Turkish official who listened to phone calls between Erdogan and Putin said the Russian president is no longer pushing for Zelensky to step down and “now accepts the reality of Zelensky as the leader of the Ukrainian people, whether he likes it or not,” The New York Times reported.

“There will be a peace deal at some point. Of course, we all want this to happen sooner rather than later, but probably Putin thinks that he wants to be in a position of strength when he does that, and not appear to be weak, weakened by either military losses or by the economic sanctions,” the Turkish official said.

Blinken Says Russia Could be Planning a Chemical Attack

When the U.S. begins to lose public support of military intervention, it brings up chemical weapons.

The U.S. built its case against Iraq when then-Secretary of State Colin Powell, on 5 February 2003, warned the United Nations Security Council that Saddam Hussein was developing weapons of mass destruction—like anthrax—that he could use against his nearby adversaries.

“Saddam Hussein and his regime will stop at nothing until something stops him,” he said at the time.

The U.S. has—more recently—accused Syria’s Bashar al-Assad of using chemical weapons against his own people.

Blinken has warned that Moscow could be preparing for a chemical weapons attack in Ukraine in its effort to take control of strategically key cities like Mariupol.

Andrew C. Weber, a top Pentagon official during the Obama administration, told The Washington Post that Russia used a nerve agent to target Sergei Skripal and his daughter in 2018.

“Russia used chemical weapons, in peacetime, in a foreign country. The thought that they might now use chemical weapons in Ukraine is entirely rational,” he told the paper.

Lt. Gen. Martin Herem, chief of the Estonian Defense Forces, told CNBC that NATO should intervene if Russia uses chemical weapons on Ukraine. He said Russians are “creating context that this is about to happen.”

“They are already spreading fear without really using the weapons themselves,” he said.

Blinken said there is concern that Russia could be “setting the stage to use a chemical weapon and then falsely blame Ukraine to justify escalating its attacks.”

TREND FORECAST: We’ve seen Russia and the West engage in direct confrontation to control the narrative. The Western media has largely presented Zelensky as a hero facing down Putin while never providing the facts leading up to the war, beginning with the 2014 U.S. orchestrated coup that overthrew the democratically elected president of Ukraine, Viktor Yanukovych.

And never a mention of Zelensky’s violation of the 13 point Minsk Agreement that representatives of Russia, Ukraine, the Organisation for Security and Cooperation in Europe (OSCE) and the leaders of separatist-held regions Donetsk and Luhansk signed in February 2015:

Therefore, we maintain our forecast that Russia will defeat Ukraine and many of the Minsk Agreement provisions will be enforced.

TRENDPOST: Gerald Celente interviewed Ret. Col. Douglas Macgregor about the war, and the former military official, citing unnamed sources, said the only reason Russian forces were tied up in conflict early on is because they were told by Putin to avoid civilian deaths. (WATCH VIDEO HERE.)

TREND FORECAST: And while U.S. Secretary of State Antony Blinken has, in the past, vowed that Washington's commitment to Kyiv is "ironclad." (See “BLINKEN BELLOWS: U.S. COMMITMENT TO UKRAINE'S SOVEREIGNTY IS 'IRONCLAD’”), yes the war machine will keep ramping up, but Washington will not confront Russia head-on despite its taking control of Ukraine, as we have forecast when the war broke out on 24 February.

Again, the Trends Journal has long forecast that the U.S. and NATO will not go to war with Russia over Ukraine. The military in Ukraine is no match against the Russians and NATO has said time and again that it will not come to the defense of Ukraine, no matter how many standing ovations President Volodymyr Zelensky receives in parliaments around the world.