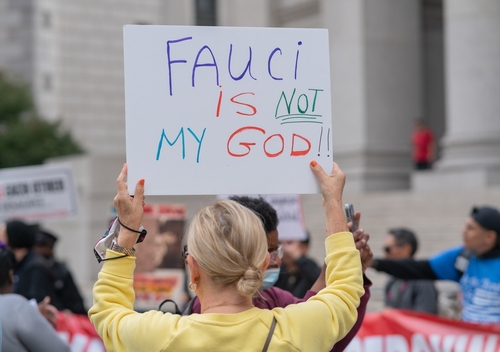 A federal judge in New York on Tuesday sided with state workers who sued the state, contending that COVID-19 vaccine mandates violate their constitutional rights.

“With this decision the court rightly recognized that yesterday's ‘frontline heroes’ in dealing with COVID cannot suddenly be treated as disease-carrying villains and kicked to the curb by the command of a state health bureaucracy,” Christopher Ferrara, the head attorney for the plaintiffs in the case, said, according to The Wall Street Journal.

The Trends Journal has been closely following the vaccine mandate and subsequent legal battles. In general, workers who are opposed to getting the vaccine have two ways to get out of it if they want to keep their jobs: claim either a religious or medical exemption. (See “HEALTH CARE WORKERS CHALLENGE VAX ON RELIGIOUS GROUNDS, POPE SAYS THEY DON'T HAVE A PRAYER,” “HERE COMES THE JUDGE: UNIVERSITY VACCINES REQUIRED.”)

The Empire State’s mandate—which was handed down in August—is clear. Employees who work in hospitals do not have the option to take weekly tests and, while there were some medical exemptions under the state’s law, there were no religious ones. About 55,000 workers took the shot and about 35,000 refused the jab.

Judge David Hurd extended his previous injunction that bars the state from going on without a religious exemption. Gov. Kathy Hochul said that she plans on fighting the decision. LoHud.com reported that thousands of workers may have been suspended for not signing up for the shot, but now may be able to go back to work after the ruling.

The paper, citing court papers, said the initial lawsuit was filed by 17 Catholic and Baptist medical workers who opposed taking the vaccine over their connections to aborted fetal cells.

Hurd agreed with the workers that not providing the religious exemption likely violated federal laws.

“The question presented by this case is not whether plaintiffs and other individuals are entitled to a religious exemption from the State’s workplace vaccination requirement. Instead, the question is whether the State’s summary imposition of (the mandate) conflicts with plaintiffs’ and other individuals’ federally protected right to seek religious accommodation from their individual employers,” he wrote, according to the paper. He wrote that the answer was “clearly yes.”

TREND FORECAST: In the United States, according to the Public Religion Research Institute, a majority of Americans, some 52 percent support religious exemptions while 46 opposed it. Thus we forecast that the more employers demand employees get the COVID Jab, the requests for religious exemptions will increase.

In the United States, Title VII of the Civil Rights Act of 1964 protects religious exemptions and prohibits employment discrimination based on religious beliefs or moral convictions. It requires employers to accommodate someone's "sincerely held” religious beliefs and practices.

Thus, those wishing to receive a religious exemption will give their employer a written notice that a vaccine is in violation of their religious beliefs.

By the end of this week, The Universal Church of Freedom, Peace and Justice, founded by Gerald Celente, will be issuing religious exemptions for Church members.