ZUCKERBERG BOUGHT 2020 ELECTION WITH HALF A BILLION 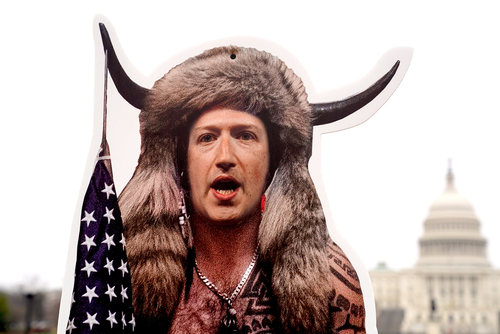 No mega billionaire usurper did more to buy the 2020 election than Facebook’s Mark Zuckerberg.

According to a Federalist story which was picked up by multiple outlets, “zuckbucks” was targeted to key cities and counties by the Center for Technology and Civic Life (CTCL) and the Center for Election Innovation and Research (CEIR) in ways that would draw out Democratic voters and boost the vote count for then-candidate Joe Biden in critical swing states.

But it wasn’t just the amount of money Zuckerberg spent that produced such a corrosive attack on America’s electoral process, and indeed the Federal Republic itself.

According to Doyle, the way money was used to infiltrate and influence political election administration processes was previously unknown in politics before 2020:

“This is not a matter of Democrats outspending Republicans. Private funding of election administration was virtually unknown in the American political system before the 2020 election.

“Big CTCL and CEIR money had nothing to do with traditional campaign finance, lobbying, or other expenses that are related to increasingly expensive modern elections. It had to do with financing the infiltration of election offices at the city and county level by left-wing activists, and using those offices as a platform to implement preferred administrative practices, voting methods, and data-sharing agreements, as well as to launch intensive outreach campaigns in areas heavy with Democratic voters.”

In a Newsmax interview responding to the revelations, Representative Devin Nunes (R-CA) said Americans should be outraged by Zuckerberg’s unprecedented actions.

“Now you have this additional information here, where you have these oligarchs who are richer than many of the richest nations in the history of the planet, who dump in $420 million dollars.”

Nunes noted that a total of 1.3 billion was given to Donald Trump by all donors in the 2020 election cycle.

A sizable percentage of that sum came from small donations, and Trump contributed relatively little of his own money to his campaign, compared to other candidates like Michael Bloomberg.

The money Zuckerberg spent on election manipulation efforts on behalf of Biden represented more than one-third of the total monies raised by the Trump campaign.

“One man gave nearly $500 million,” said Nunes. “That man should scare the hell out of people."

Doye’s research found multiple ways that the CTCL and CEIR bought and hijacked election processes on local and state levels to benefit Biden. Among other things, the organizations:

“This unprecedented merger of public election offices with private resources and personnel is an acute threat to our republic, and should be the focus of electoral reform efforts moving forward.”

But even 420 million dollars on election manipulation doesn’t account for all of Zuckerberg’s influence.

Facebook, the leading platform for the demographic of “most likely voters” in the U.S., systematically suppressed and shut down pro Trump and anti-Biden information during 2020.

As BLM and Antifa riots were raging in the summer for example, Facebook promoted narratives that the frightening violence and enormous destruction were actually mostly peaceful, and righteous.

It castigated Trump’s calls for order and support for police as racist and fascistic. It even celebrated a violent protest at the White House gates in June, during which a church across the street was set on fire.

The President was savagely criticised for ordering protesters cleared, so he could visit the church and issue a statement against the violence.

But perhaps the most egregious pre-election suppression on Facebook and other social and traditional media outlets concerned a laptop of Joe Biden’s son, Hunter.

Facebook and others prohibited the dissemination of highly damaging information found on the laptop, which Hunter Biden abandoned at a repair shop.

What’s more, Facebook amplified bogus claims that the laptop was part of a Russian ploy to interfere in the election.

"I have been around the country trying to warn people about the Big Tech oligarch," Nunes told Newsmax. "So it's not just the propaganda media that the left controls; now they control how we see that information through Fascist-book, as you call it. I call it Fakebook."

Under that statute, they are protected from liability that media publishers must take into account, since the social platforms have not been defined as “publishers.”

The Trends Journal is proud of our unparalleled coverage on the electoral and free speech abuses of Facebook and other tech companies in many articles, including: