ZUCKERBERG: AI WILL PLAY GOD IN YOUR METAWORLD 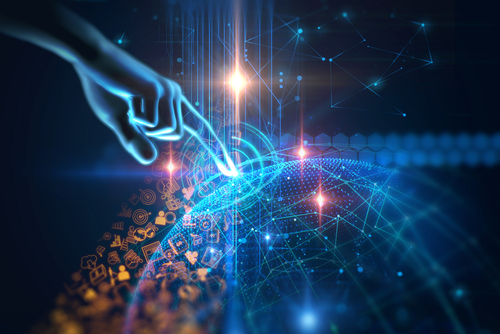 Under the guise of “human rights,” Artificial Intelligence (AI) will decide what can take place in the metaverse-or at least Meta’s (formerly Facebook) version of it.

Zuckerberg gave a new demonstration this past week of metaverse technology his company is building.

Together with a tech engineer, he showed how an “empty” virtual space could be filled and created into an island paradise, via voice commands to an AI intelligence.

Saying things like, “Actually, let’s go to the beach,” “let’s add some clouds,” and having landscape and ocean appear, along with a sky and cumulous accents, the corporate billionaire commented admiringly, “that’s all AI generated.”

True, the graphics involved looked like something from a first generation Wii game system.

But Meta is clearly focused on the AI and interfacing technologies that will connect and allow communication and “world-building.” More realistic graphics will come later. So will sensors and wearables that give users tactile sensations, providing a more “immersive” experience.

The presentation made it seem like anything one desired and could imagine would be available by merely speaking it to an AI genie that Zuckerberg referred to as “Builder Bot.”

If that sounds like something out of a children’s TV show, it may not be a mistake. Meta’s infantilizing version of the metaverse will come with a huge caveat: just like in the classic 1960’s sitcom I Dream Of Jeannie, the wish giver will be the one really in charge.

To put it bluntly, there are things Meta’s metaverse won’t allow.  Think of those vague “community guidelines” that instill corporate-government narratives and mete out punishments and, if necessary, outright bans to dissident viewpoints and thoughts.

During the demonstration, Zuckerberg couched the implementation of all his ideological biases by a “Builder Bot” as ensuring “human rights.”

But the fast evolving Meta spin up of a virtual world is already inherently unequal, with all the power weighted to a central authority: a corporation, a mega billionaire, and a Federal government which has fully partnered in the monopolistic ascendency of a handful of tech corporations in America.

Zuckerberg himself has said that he believes the Metaverse is destined to be the “the next version of the Internet.”

In the same way that the relatively open internet of the 1900’s gradually gave way to the dominance of a handful of powerful tech social and commerce platforms, Meta’s mega billionaire wants to position Meta as the mediator of that new internet.

No one should be surprised. And a recent ZDNet article underscores that no one should want a part of it:

“In a Metaverse, as conceived by Meta CEO Mark Zuckerberg, you cannot even scratch your virtual nose without the permission of a program controlled completely by the company.”

Part of the promise of so-called “Web3” or decentralized internet technologies is that users will control their own digital destiny.

Whether it’s how one chooses to store and use the value of one’s entrepreneurial efforts, investments and labor, or one’s digital property, or even one’s digital identity, there are decentralized blockchain initiatives envisioning and building new paradigms and new solutions.

It’s not an exaggeration to say that many of these initiatives, while still very in their infancy, are already disrupting the current status quo of the corporate and government control that has exerted a progressive lock and key on such things in the modern and current digital age.

Whatever else the metaverse will be, it is already shaping up to be a battleground of control and freedom that everyone should be paying attention to, since literally future reality is literally at stake.

For more on issues surrounding the metaverse, check out: