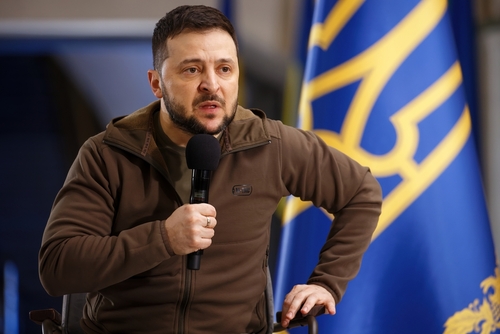 The comedian who played the President of Ukraine on TV and then was voted by the people to become the official President of Ukraine, Volodymyr Zelensky, rejected outright any proposal to negotiate for peaceful settlement that would include ceding land to Russia to end the months long conflict.

“No one is going to trade a gram of our sovereignty or a millimeter of our territory,” Zelensky said in a video. “Our children are dying, soldiers are being blown apart by shells, and they tell us to sacrifice territory. Get lost. It’s never going to happen.”

Last week, Italy's Minister of Foreign Affairs Luigi Di Maio, proposed to the United Nations a four-point peace plan to end fighting. Russia said it did not see the Italian plan, but rejected the plan as a “fantasy,” because the West continues to pour weapons into the country.

"You can't supply Ukraine with weapons with one hand and come up with plans for a peaceful resolution of the situation with the other," Maria Zakharova, Russia's foreign ministry spokeswoman, said at her weekly briefing.

The Wall Street Journal reported that the Italian proposal included autonomy for Ukraine’s Crimea and Donbas.

Henry Kissinger, the former secretary of state, also said last week that Zelensky should negotiate for a peaceful resolution and prevent thousands more from dying needlessly.

“Negotiations need to begin in the next two months before it creates upheavals and tensions that will not be easily overcome,” Kissinger told the World Economic Forum (WEF) in Davos. “Ideally, the dividing line should be a return to the status quo ante.”

The 98-year-old said pursuing the war “beyond that point would not be about the freedom of Ukraine, but a new war against Russia itself.”

He said Ukraine should be willing to cede territory in the peace process. Ukraine has said it will not stop fighting until Russia retreats from the country. Kissinger told the audience in Davos that it would be “fatal” for Western countries to disregard Russia's position of power within Europe.

“I hope the Ukrainians will match the heroism they have shown with wisdom,” Kissinger said.

Mykhailo Podolyak, an adviser to Zelensky, was critical of Kissinger’s remarks and said the former diplomat would as easily “allow to take Poland or Lithuania away,” a reference to WWII.

“It’s good that Ukrainians in the trenches do not have time for listening to ‘Davos panickers.’ They're a little bit busy defending Freedom and Democracy,” he wrote on Twitter.

Podolyak’s comments are not surprising. His boss Zelensky also addressed an audience in Davos on the same day as Kissinger, and spoke about more ways the West could inflict pain on Russia.

Last week, during an interview with CNN, where Zelensky was called “the most important world leader” by the host, he said Ukraine will fight until it gains all its territory back.

TREND FORECAST: We maintain our forecast that Ukraine will not gain back its territory.

And to illustrate the levels of propaganda that the public is fed, the arrogant host of a Cartoon News Network (CNN), Fareed Zakaria, declared that this comedian who became Ukraine’s president, is “the most important world leader.”

Zelensky is not a “world leader, and he is not that “important.” He is a member of the government crime syndicate running Ukraine.

Yet, the comedian President is artificially elevated by the media to a high level of political nobility. In doing so, the average listeners who can’t, and don’t, think for themselves—as are those who watch CNN—swallow what they are fed and support America and NATO’s involvement in a foreign entanglement which has nothing to do with “the world” ... unless the world intervenes.

TREND FORECAST: Ukraine would have been forced to negotiate with Russia months ago if not for the multi-billion dollar weapon flows from the West and billions in funding to prop up the economically broke and busted Kyiv government.

The New York Times ran an editorial last week titled, “The War in Ukraine is Getting Complicated, and America Isn’t Ready?” The column pointed out that as the war drags on Washington’s position continues to evolve and ultimate goals are becoming opaque.

WSWS.org pointed out the column and wrote that there seems to be a change at the paper. The Times has “incited pro-war and anti-Russia hysteria. But it now writes that it is not “in America's best interest to plunge into an all-out war with Russia, even if a negotiated peace may require Ukraine to make some hard decisions.”

“If the conflict does lead to real negotiations, it will be Ukrainian leaders who will have to make the painful territorial decisions that any compromise will demand,” the paper wrote. The paper also took an unusual, but realistic stand vis-á-vis Washington’s backing of Kyiv.

“Mr. Biden should also make it clear to President Volodymyr Zelensky and his people that there is a limit to how far the United States and NATO will go to confront Russia, and limits to the arms, money, and political support they can muster. It is imperative that the Ukrainian government's decisions be based on a realistic assessment of its means and how much more destruction Ukraine can sustain,” the paper wrote.

Someone from The Times must have just subscribed to The Trends Journal because we have been making this case since the beginning of the war.

Russia is a much larger military and Putin will not allow his forces to be humiliated in Ukraine. He would fight to the last man. Zelensky loses negotiating power by the day. He should make concessions now.