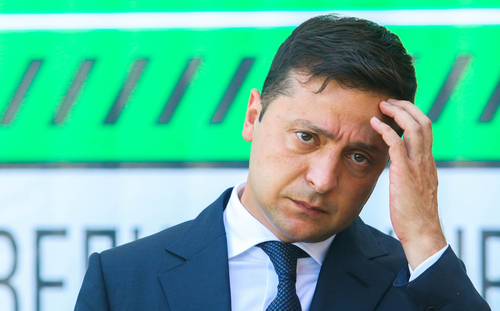 Ukrainian President Volodymyr Zelensky said Friday that his country will emerge victorious from the Russian invasion despite absorbing major losses in the country’s eastern region.

The AFP translated a video address to his countrymen meant to assure them that Kyiv is staffed and functioning. He told them that Prime Minister Denys Shmyhal and top advisers are all in the capital.

“Our team is much bigger,” he said. “The armed forces of Ukraine are here. And most importantly, the people, the people of our state are here, defending Ukraine for 100 days already. Victory will be ours. Glory to Ukraine.”

The Hill pointed out that the video was similar to the one his office released shortly after the Russian invasion on 24 February when he told them that he will not leave the capital.

The video was filmed about a day after he said Russians and separatists control about 20 percent of the country. Kyiv has insisted that it will not lay down arms until Russian troops retreat.

French President Emmanuel Macron is one of the only western leaders in touch with the Kremlin since the war broke out. He warned that Russia should not be humiliated on the battlefield so an exit ramp could be built through diplomatic means.

The statement seems to be logical, but not to Kyiv.

Dmitro Kuleba, the Ukrainian foreign minister, took to Twitter and posted, “Calls to avoid humiliation of Russia can only humiliate France and every other country that would call for it.”

One of Zelensky’s top aides also turned down the suggestion that there should be negotiations until Kyiv receives the new weapons from the West and the country begins to drive the Russian forces back to the borders.

President Joe Biden on Friday acknowledged for the first time since the Ukraine War broke out that Ukraine may eventually have to cede land to Russia if it wants to reach a ‘negotiated settlement’ and end the death and destruction.

Biden said he will not tell Kyiv how to proceed, but it “appears to me that at some point along the line, there’s going to have to be a negotiated settlement here.”

TRENDPOST: Anyone who suggests anything but a complete victory for Ukraine is immediately condemned by Kyiv and its most vocal allies. Russia is a much bigger power and is pounding Ukraine’s eastern side despite billions in weapons and training from the West.

The Biden administration is in no hurry for a peaceful resolution and has said it wants to see Russia badly damaged and weakened so the military is impotent and cannot invade again.

China, in the meantime, is watching all of this and benefiting from buying Russian gas and oil at a steep discount while the rest of the world struggles.