ZELENSKY BLINDED BY TRENDS JOURNAL COVER: VOWS NOT TO GIVE UP AN INCH OF TERRITORY TO RUSSIA 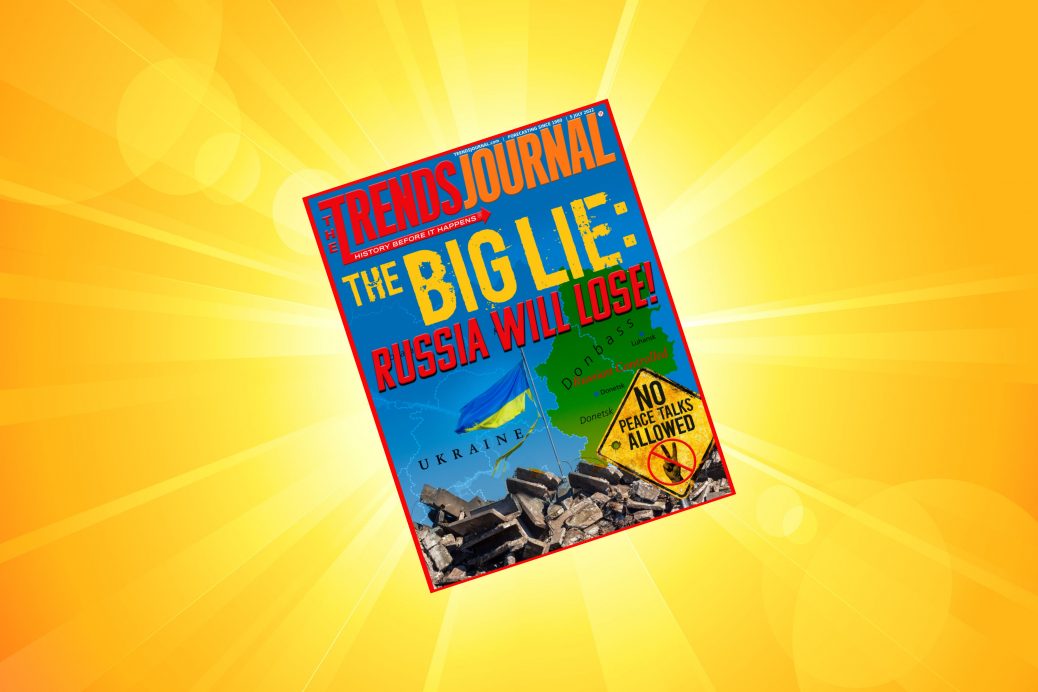 Ukrainian President Volodymyr Zelensky said in an interview last week that Kyiv is not willing to cede any land to Russia when it comes to finding a peaceful resolution to the conflict.

Last week, The Trends Journal ran a cover titled, “THE BIG LIE: Russia Will Lose!”, that noted ongoing reports in the West by military and other “experts” that predict Russian forces are suffering massive casualties and the Ukraine military will beat them. These reports highlighted alleged troop desertions and victories by Ukrainian forces. The losses were due to a catastrophic miscalculation by Russian President Vladimir Putin who thought Ukraine would lay down its arms when his tanks began to roll.

But the realities on the ground have since become more apparent. Russia now controls all the territory in the Luhansk region, and it is believed that Putin intends to take over larger swaths of the country. Russian troops continue to look to the west in the country and on Monday fired missiles into Chasiv Yar, a town about 12 miles from the front line.

Zelensky has been consistent in his position. He told CNN last Thursday that Ukrainians “are not ready to give away their land, to accept that these territories belong to Russia. This is our land.”

"We always talk about that, and we are intending to prove it," he said.

Zelensky is not alone in Ukraine. A University of Chicago’s NORC poll found that 89 percent of Ukrainians agree that ceding any land to Russia to achieve peace would be “unacceptable,” and about 79 percent approved Zelensky’s approach to the conflict. The International Republican Institute found 97 percent of Ukrainian participants believed Ukraine will win the war, according to CEPA.

One of Zelensky’s first moves after the Russian invasion was to crush any critics. He banned 11 political parties due to their alleged links to Russia. War has a way of rallying a country. Zelensky was an unpopular president. His approval rating was falling prior to the war, and about 55 percent of Ukrainians said they were opposed to a second term.

Alain Gabon, an associate professor of French studies and chair of the Department of Foreign Languages & Literatures at Virginia Wesleyan University, wrote in MiddleEastEye that Zelensky used the war to “eliminate media freedom by merging and nationalizing Ukrainian television channels into a single information platform called “United News” - a platform entirely dedicated to his propaganda.”

Putin came out Thursday in what many said was his most aggressive speech to parliament yet, and said, “Largely speaking, we haven’t even yet started anything in earnest."

TREND FORECAST: Ukraine would have been forced to negotiate with Russia months ago if not for the multi-billion dollar weapon flows from the West and billions in funding to prop up the economically broke and busted Kyiv government.

But then again, there is always the wild card, and this one is a false flag or real nuclear exchange in which case, if We the People do not unite for Peace and Freedom, it will be the beginning of the end of life on earth and the thousands year “Little Ice Age,” as we noted in this Trends Journal (See NUCLEAR WAR: MELT, BURN AND FREEZE).