YOUTUBE: NO FREEDOM OF SPEECH. BELIEVE WHAT WE TELL YOU! 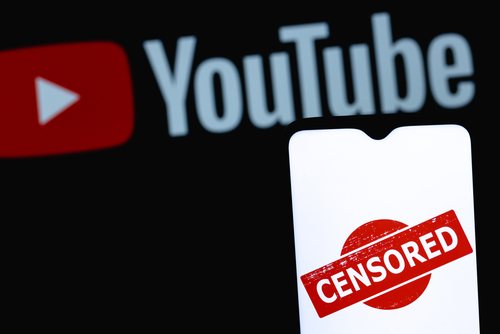 YouTube is keeping up with the new American free-speech tradition: You can say whatever you want, as long as it’s approved.

The Google-owned platform announced that it will take down video channels tied to Robert F. Kennedy Jr. and Joseph Mercola, an alternative medicine entrepreneur, as part of its sweeping crackdown on videos that claim COVID-19 vaccines approved by health authorities are dangerous and ineffective.

“We’ve steadily seen false claims about the coronavirus vaccines spill over into misinformation about vaccines in general, and we're now at a point where it's more important than ever to expand the work we started with COVID-19 to other vaccines,” YouTube said in a statement.

The Trends Journal has reported extensively on the tech crackdown against COVID-19 “misinformation.” (See “YOUTUBE BANS SEN. RAND PAUL FOR QUESTIONING FAUCI,” “YOUTUBE BANS THE SCIENCE AGAIN” and “FREEDOM OF SPEECH IS UNDER ATTACK AS ONLINE CENSORSHIP INCREASES.”)

Vaccination rates in the U.S. have slowed. Only 56 percent of the population has received both shots compared to 71 percent in Canada. The White House has been vocal that influential voices online have contributed to vaccine hesitancy.

The White House has pointed its finger at social networking companies like Facebook for allowing the spread of inaccurate information. President Biden said in August that the “only pandemic we have is among the unvaccinated, and that—and they’re killing people.”

The company said it will take some time to pull down all the videos that it deems as misinformation. YouTube has not called for the ban of videos that raise questions about other widely used vaccines like chickenpox and measles.

TRENDPOST: It is a fascist/communist world when tech companies become the self-appointed arbiters of truth. One needs to look no further than last November when Twitter decided to restrict the distribution of a New York Post article with “unverified claims” about Hunter Biden.

Just recently, Ben Schreckinger, a reporter from Politico, published a book, “The Bidens: Inside the First Family’s Fifty-Year Rise to Power,” which stands up most of the Post’s reporting on Hunter Biden’s emails with a Ukrainian businessman. Twitter decided to block the Post’s story—at the height of the election season—due to its “Hacked Material Policy.” Would Biden have won if not protected by Big Tech?

YouTube was also criticized in Russia last week for removing posts from Alexei Navalny, the Putin critic, that showed “Smart Voting,” which recommends to the public candidates most likely to defeat pro-Kremlin hopefuls, according to The Moscow Times. Navalny blasted President Vladimir Putin for turning the “almighty Big Tech” into “his accomplices.”

TREND FORECAST: Among the greatest OnTrendpreneur® opportunities of the first half of the 21st century is the creation of competitive social media sites. The world awaits it. That so few exist makes no social, political or business sense.

TREND FORECAST: We have written extensively about the censorship trend and how it would increase. In the 11 December 2018 Trends Journal article, “CENSORSHIP 2019,” we forecast the proliferation of internet censorship across the globe: “Freedom of speech? Freedom of Expression? Forget about it! From the United States to China, from New Zealand to Nepal, Censorship is a megatrend. For well over a year, social media giants and governments have been silencing voices that challenge establishment agendas.”

In our 21 January 2020 issue, we doubled down on the forecast, stating: “Our ‘Censorship’ Top Trend of 2019 has now become a way of life: unchallenged and barely reported by the mainstream media, who are included among social media giants as the chief censors banning those who don’t tow their party lines and special interests.”

As the Trends Journal has been warning for years, Silicon Valley is silencing users on the internet who dare challenge the official narrative. Unfortunately, ever since the politicians and Presstitutes started the COVID War, censorship has increased dramatically.

The degree of censorship muzzling the globe is now potentially so comprehensive that it poses an imminent threat to the fundamental concept of freedom.