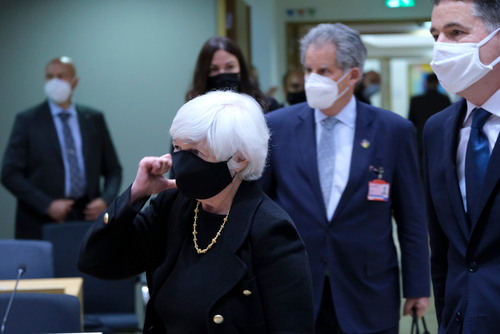 U.S. Treasury Secretary Janet Yellen, said on Wednesday what the Trends Journal has been writing about all along: Russia’s invasion of Ukraine will have a devastating impact on the global economy still trying to emerge from the socioeconomic devastation caused by the COVID War.

Yellen appeared in front of the House Financial Services Committee last Wednesday to discuss the international financial system. Ignoring America’s numerous illegal wars that cost trillions and killed millions, she chastised Russian actions in Ukraine as “reprehensible” and an “affront to the rules-based global order.”

She pointed to some of the challenges that stand in the way of cutting Russia off financial institutions around the world—especially since Europe is still reliant on Russian natural gas.

"President Biden's made it clear... that it cannot be business as usual for Russia in any of the financial institutions," Yellen said. "He's asked that Russia be removed from the G20, and I've made clear to my colleagues in (presidency holder) Indonesia that we will not be participating in a number of meetings if the Russians are there."

She expects people in every country to see rising prices for basic items like food and other commodities. (WATCH GERALD CELENTE'S INTERVIEW WITH JUDGE ANDREW NAPOLITANO ON SANCTIONS AND HOW THEY ARE A WASTE OF TIME.)

Yellen’s comments came a day after Deutsche Bank revised down its forecast for global growth and said it now sees a recession in the U.S. and “a growth recession in the euro area within the next two years," CBS News reported.

The Trends Journal has reported on the fragile state of the world economy and how the middle class and poorest stand to be most impacted. (See “BIDEN’S ‘HATE RUSSIA’ SANCTIONS CAMPAIGN INTENSIFIES” and “BIDEN BACKTRACK: SAYS SANCTIONS WERE NEVER MEANT TO DETER RUSSIA FROM INVADING UKRAINE.”)

Again, as we continue to note, the general public is only getting a one-sided view of the sanctions and mandates imposed against Russia, which we forecast will do nothing to alter Moscow’s military posture, but will cause great hardship for the people of the world.

Besides the Ukraine War, the world is experiencing the highest inflation in four decades and China’s massive COVID lockdown due to a recent outbreak.

Larry Summers, the Harvard University economist, told the Associated Press that the U.S has gone into recession within two years every time inflation passed 4 percent and unemployment was below 5 percent as they are now.

Peter Schiff, the economist, told the Trends Journal last week that he believes actual inflation is around 16 percent, the eight percent that the government "admits."

Yellen told lawmakers last week that the White House would also be willing to sanction China if there were any hostile acts taken against Taiwan.

The Trends Journal has pointed out that Taiwan would be no match against China, which spends 25 times the amount Taipei does on its military. China also has a hundred times as many ground-force troops as the island.

"I believe we've shown we can" inflict financial pain on countries in the way Washington is hurting Russia, she said. "I think you should not doubt our ability and resolve to do the same in other situations."

Wang Webin, a Chinese spokesman, blamed the U.S. for increased tensions across the Taiwan Strait.

"The root cause is that the authorities in Taiwan keep pushing the independence agenda by soliciting your support and that some in the U.S. attempt to use Taiwan to contain China. They have been colluding with each other," he said.

We forecast that just as Beijing has clamped down on Hong Kong protests and taken full control, so, too, will they take control of Taiwan when they are ready.

Despite condemnations when they do so, there will be no military forces from other nations that will challenge Communist China’s military might.

Indeed, America, with the largest military in the world, has not won a war since World War II and cannot even win against third-world nations, such as Afghanistan, after invading that nation some 20 years ago.