WORLD’S SUPPLY CHAIN SNARLED UNTIL WELL INTO NEXT YEAR 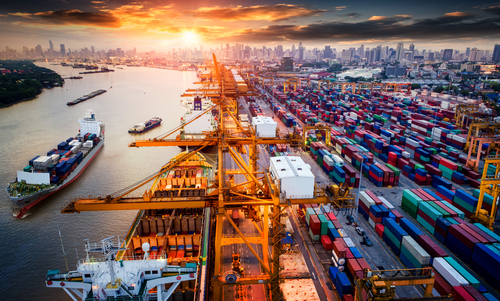 The global supply-chain gridlock—a tangle of materials shortages and transport snarls—will remain unsolved until some time next year, according to manufacturers and transport company executives, Bloomberg reported, as did we in “China Closes Key Port Terminal: Trouble Ahead,” 24 August, 2021.

“We can’t get enough components, we can’t get containers, costs have been driven up tremendously,” CEO Christopher Tse of Hong Kong’s Musical Electronics Ltd. told Bloomberg.

The magnets the company uses to make Rubik’s Cubes have jumped 40 percent since March, he noted, adding, “I don’t know if we can make money from Rubik’s Cubes because prices keep changing.”

“Port congestion and a shortage of container shipping capacity may last into the fourth quarter or even mid-2022,” Hsieh Huey-chuan, president of Taiwan’s Evergreen Marine Corp., said at an investor briefing on 20 August, as reported by Bloomberg.

“If the [COVID virus] cannot be effectively contained, port congestion may become a new normal,” he said.

The cost of shipping a container from Asia to Europe has risen tenfold since May 2020 and the cost between Shanghai and Los Angeles more than sixfold, the Drewry World Container Index reported recently.

Some shippers have abandoned fixed pricing and are auctioning container space to the highest bidder, according to Bloomberg.

In August, Toyota announced it is suspending work at 14 plants in Japan and cutting vehicle production by 40 percent because of a shortage of a variety of components, not just chips.

Town Ray Holdings, a Chinese maker of kitchen appliances, is trying to store a year’s worth of components needed to keep making products; the Vietnamese government is allowing factories to permit workers to sleep on-site to try to minimize the virus’s spread and keep the wheels of industry turning, Bloomberg said.

More than half of the 3,000 German firms surveyed by the Association of German Chambers of Industry and Commerce said the problems across their supply chains are likely to persist into 2022.

A measure of business confidence in Germany’s economy dropped last month more than expected, due to a range of shortages, according to the ifo Institute, which conducted the survey.

The world’s flow of goods has become so precarious that one incident—such as China’s short-term closure of one terminal at one port—“could easily have its effects compounded,” HSBC Holdings Plc. said in a recent research note, reported by Bloomberg.

TREND FORECAST: The long-term disruption in the global circulation of raw materials and finished products will push inflation higher, faster, and longer, as we predicted in “Shipper Books Tenfold Increase in Net Profits” (17 Aug 2021).

This will do wide-ranging damage to the world’s economic recovery—slowing job creation, consumer spending, and business investment.

The combination of the persistent COVID virus, materials shortages, and the inflation and slowed job growth resulting from them complicates the U.S. Federal Reserve’s calculus around reducing its bond-buying program, which, it has said, it will end before it raises interest rates, as we noted in “Will Fed Reduce Bond Purchases Later This Year?” (3 Aug 2021).