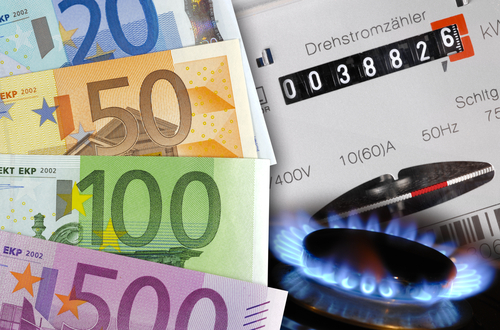 Yes, inflation is real. But do you think the Bankster mob and their billionaire buddies care?

The wholesale price of natural gas has climbed 250 percent since January and 70 percent in the last three weeks, according to Oil & Gas UK, an industry trade group.

The soaring gas price has multiplied electricity prices as much as sevenfold, forcing some steel plants to pause production during some days and threatening the nation’s food supply, The Wall Street Journal reported.

Two-thirds of U.K. manufacturers feel the pressure of rising energy costs, according to a survey by trade group Make UK.

The government is in crisis talks with various industry and consumer groups, the Financial Times said.

Natural gas supplies were depleted by a cold wave late last winter and have yet to be replenished.

Gas and electric prices are shooting up across Europe, as we noted in “High Natural Gas Prices Slow Europe’s Recovery” (14 Sep 2021).

Europe’s economic recovery has hiked demand for fuel and an unusual absence of offshore wind has shorted renewable fuel to make needed electricity.

Also, Europe has dismantled about 40 percent of its coal-fired electric plants since 2016; Germany abandoned nuclear power after Japan’s 2011 Fukushima catastrophe.

The price of electricity in Germany, already the highest in Europe, has shot from €36 per megawatt-hour in February to €164 on 14 September, data collector ICIS said.

Prices are likely to rise even more, according to Russia’s state-controlled Gazprom gas company, which supplies much of Europe’s natural gas, due to “shortages in underground storage.”

Critics and some public officials have accused Russia of deliberately curtailing supplies, which it has done previously as a political pressure tactic against European nations.

Ninety-seven percent of mid-size German manufacturers expect electricity prices to move steadily higher over the next five years, according to a member survey by Der Mittelstand, a lobby group for mid-size, family-owned companies.

“If the trend of exploding electricity prices continues, we are in danger of seeing a gradual exodus of energy-intensive production,” Markus Jaeger, the group’s director, said in a statement reporting the survey’s outcome.

Making matters worse for Britain, a 15 September fire damaged an undersea cable bringing electricity from France to the U.K., an outage that could last more than a week, according to National Grid, the company that manages the kingdom’s electricity network.

With many small British electric companies unable to get gas at prices they can afford, “we could easily end up with less than 10 [electric] suppliers by the time we come through winter,” Ellen Fraser at consulting firm Baringa told the FT.

Already as a result, two British fertilizer makers have shut down; methane is a basic ingredient in their product.

The loss of gas supplies also will damage the meat-processing industry: carbon dioxide, a byproduct of the fertilizer industry, is used to knock out animals before slaughtering them. The gas also is used to safely package food products.

Sixty percent of the U.K.’s carbon dioxide supply has now been cut off, leading the government to warn the meat industry of supply-chain disruptions this week.

Normally, British producers could turn to European counterparts for back-up supplies but they have learned that many plants on the continent are to be closed as well.

With labor shortages leaving a backlog of 100,000 pigs ready for processing, the industry is considering a “welfare cull” of the herds, the National Pig Association said in a public warning.

TREND FORECAST: Again, inflation is real and it is not “temporary.” Nearly a year of rising prices is not short term. Also, the implications of rising inflation as currencies weaken will hit the working class, whose real wages are declining (while the richest get richer) very hard... costing them more to buy less.

While there is little political push back now—and the masses obediently follow their political masters now in charge—when governments and Banksters can no longer rig the markets and the Greatest Depression sets in, there will be strong anti-establishment “People’s Party” movements that will reinstate anti-trust regulations and promote small business economic incentive measures.