WHEN ALL ELSE FAILS, GENE EDITORS BLAME WAR 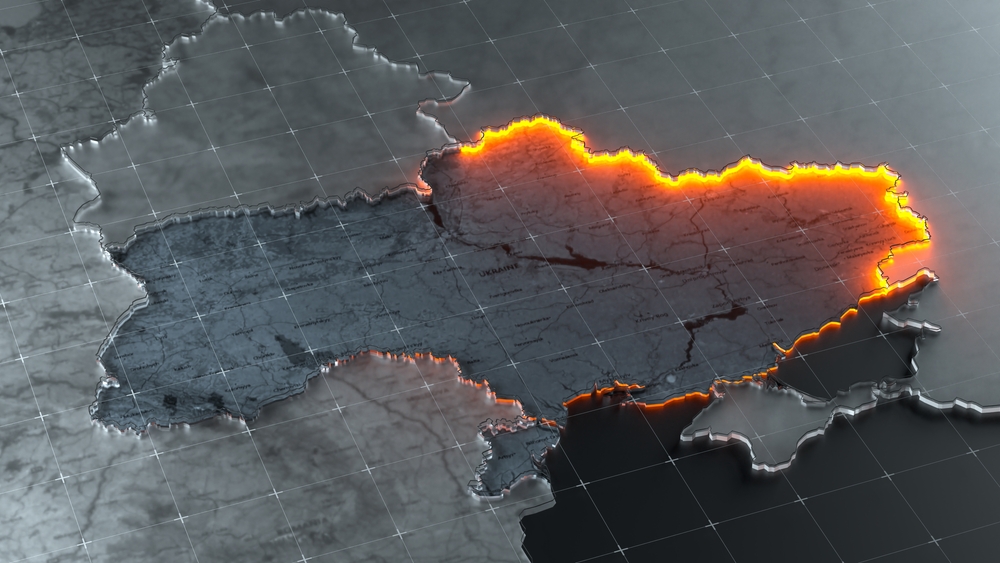 They had to start gene editing plants and livestock, because Russia - Ukraine!

No kidding. That’s one of the rationales put forward by U.K. government officials, in support of legislation that will allow the introduction of unlabeled gene-edited foods to consumers in 2023.

And meanwhile in the EU, bodies are laying the groundwork to go even further.

The EU has had one of the strongest stances against GMO foods and genomic editing in general in the entire world. But a framework is being developed that would not only permit plant and animal genome editing, but also allow people to “self-assess” disabilities for which they might seek genetic alterations.

Such a move would effectively open the door for people to be gene-edited in practically unbounded ways.

In the U.K., the Russia - Ukraine War and “Climate Change” are being cited as reasons why a landmark “Genetic Technology (Precision Breeding) Bill” must be passed.

“New genetic technologies could help us tackle some of the biggest challenges of our age—around food security, climate change and biodiversity loss,” argued Minister for Agri-Innovation and Climate Adaptation Jo Churchill.

The government introduced a landmark measure in late May that would allow crops to be grown using precise genetic editing methods that Churchill and others say would make them more robust, less dependent on pesticides, improve the environment and even healthier than natural alternatives.

According to the U.K.’s Environment Secretary George Eustice, supermarket buyers will likely be confronted with things like genetically edited mushrooms and tomatoes by 2023.  And he said a “significant number” of foods would likely be on store shelves within three to five years.

Eustice said he expects that the Genetic Technology Bill will be signed into law this year, paving the way for the first Genetically Edited (GE) foods.

“Once this bill gets Royal Assent, which will probably be during the course of this year, we will then have a regime that enables us to issue a marketing authorisation for any gene edited seeds that come out of that process,” Eustace said in an interview with inews.co.uk. “There’ll probably be some of these crops that are already available and bred in other parts of the world. So it’s possible that we could have some of these crops that have benefited from gene-edited technologies ready to be deployed during the course of next year.”

Gene Editing involves selecting or removing specific genes in a “precise” process that scientists involved in the technology claim is not functionally different in results than breeding techniques that have been used by farmers and in animal husbandry for hundreds and even thousands of years.

GMOs, meanwhile, are a process where "alien" genes are injected into the genome of a life form, which otherwise would be unlikely to be introduced via traditional breeding methods.

"Typically GMOs have genes inserted into the genome at random places," explained Jennifer Kuzma of North Carolina State University's Genetic Engineering and Society Center, in an article by the food outlet allrecipes.com. "Those genes can come from the same species (e.g., a tomato gene altered and engineered back into tomatoes) or from distant species (e.g., across biological kingdoms)."

With GMO, a gene from an ocean fish might end up in a tomato to help it survive cold temperatures.

Gene editing, meanwhile, sticks with a species genome to make “improvements” that are more akin to what used to be referred to as eugenics.

The legislation introduced in Parliament would allow researchers heritable gene edits to be introduced to foods, without foods requiring GMO type labeling.

Gene editing advocates point to successes with specific crops.  For example, a genetic alteration that switched off the enzyme that makes the mushroom brown resulted in a non-browning mushroom marketed in the United States and Canada. Proponents say it has extended the shelf life of the food and decreased food waste significantly.

And since 2019, the United States has had access to genetically modified soybeans, which reportedly produce healthier oil with a longer shelf-life.

Jim Blome, CEO of Calyxt, a commercial gene editing company that produced GE olives and soybeans, has said about its olive product, "The result is zero trans fats. The oil has zero olive flavor. It has a cleaner flavor. So, when you're frying or you're cooking with dressings you basically are now able to taste the food as opposed to the greasy, oily taste."

Calyxt has engineered a high oleic soybean oil that it says provides all of the health advantages of olive oil while using much less of the costly inputs required to cultivate olives.

The company has pointed out that their GE soybean plant does not need nitrogen-rich fertilizers, which create hazardous field run-off and add to greenhouse gas emissions. They said that locally generated high oleic soybean oil minimizes fossil fuel emissions while simultaneously supporting local agriculture, resulting in a more sustainable product.

Other companies and countries are busy with GE technology as well.

In Japan, tomatoes with larger amounts of a compound that helps decrease blood pressure, was approved for production and sale in 2020.

Opponents of the U.K. legislation paint a different picture. In mid-May, a petition asking Parliament to reject the gene editing bill was introduced.  So far the petition has less than 7,000 signatures.

According to the petition:

“[R]elaxing regulations on GE livestock would be a huge step backwards for animal welfare and jeopardise ethical consumer choices.

“Furthermore gene editing could have unpredictable effects and alter the animals in ways we cannot comprehend. We believe the use of GE technologies also threatens to push farmed animals further beyond their biological limits, which could have adverse effects for their health and in turn for consumers.”

At least some U.K. advocacy groups are speaking out against the new genetic legislation.

The animal rights charity RSPCA issued a statement saying "now is not the time to be relaxing the regulations," noting that long-term consequences of genomic alteration technologies represented a vast unknown.

RSPCA further argued that there was "no history of safe and reliable use of gene editing in farm animals," and said gene-editing had been "proven to cause unpredictable and unintended changes to the genetic makeup of animals," which could result in animal suffering and other effects.

And there were alternative approaches to achieving many of the proposed benefits of genetic technologies, for example, improving animal husbandry and reducing food waste, it said.

David Bowles, RSPCA’s head of public affairs, commented that the new U.K. bill was “incredibly disheartening and frustrating,” according to gmwatch.org.

Pat Thomas, Director of Beyond GM, was cited in New Food Magazine expressing his concerns about GE:

“Given the strong public concerns about genome editing and the fact that much of the science is unsettled and even contested, Beyond GM is calling for more widespread and inclusive debate.

“We are also calling for a much broader approach to regulation that goes beyond limited and sterile laboratory science and embraces the social sciences, environmental concerns, food justice and ethics. No substantial change in legislation should be made without reference to these considerations.”

The Euro zone has outlawed gene editing for years.  But the EU is also reportedly now considering revisions withdrawing prohibitions on the technology.  And some of an evolving EU framework portends things even more troubling than current U.K. legislation.

On 7 June, the European Parliamentary Research Service issued a statement of findings, in an article, “Mitigating the risks of genome editing in humans.”

The research body proposed a framework for opening the EU not only to genomic editing of plants and animals, but to humans as well.

It suggested a number of tenets for legal coordination and oversight of scientific and commercial gene editing ventures:

In sum, genome-editing legislation can be introduced either in existing EU regulations (vertical approach), or through specific legislation (horizontal approach), and alternative governance mechanisms can also be explored. In any case, legal harmonisation facilitates the navigation of all stakeholders involved in a currently fragmented EU legal landscape. Moving forward, a few policy options can be envisaged:

Resilience mechanisms could be included in legislation to ensure continued correspondence between legislation and ongoing scientific advancements. Terms such as somatic v germline, hereditable genome editing, modifying genetic identity, and human enhancement are vague, scientifically outdated and could be updated.

Somatic as well as germline applications can pose social and ethical risks. A multi-level, risk-based approach could be used to determine what interventions to ban. The prohibition of genetic eugenics could extend to somatic applications.

Assisted reproduction techniques are often linked with the treatment of serious diseases. Scientific criteria used to determine disease seriousness could be harmonised.

Genome-editing needs to account for fundamental rights and freedoms. Subjects of illicit practices should be treated as victims and be allowed to refuse body-invasive activities, whilst also respecting their privacy, life, integrity and autonomy.

Counterfeited services are an intellectual property rights and public health issue. Genome editing could be introduced in existing legislation, including artificial intelligence (AI) legislation, and ethical licensing could be considered.

While genome editing provides great expectations for medicine, several ethical, social and legal questions remain to be addressed and regulatory and governance mechanisms are greatly needed in the EU.

While including some cautious language and talk of respecting rights to decline “illicit” “body invasive activities”, the statement also pushed boundaries to a startling degree.  For example, it quoted an April 2022 EU Science and Technology Options Assessment (STOA) panel discussion on gene editing, to suggest that human gene editing might be ethical to use not only in cases of legally defined medical disabilities, but in cases where a patient had a self-perception of some kind of “disability.”

That would effectively open the door to editing humans based on practically any desire or self-perceived inadequacy a person might have about themselves.

Pernille Weiss (EPP, Denmark): How can we measure the seriousness of disease in respect to genome editing in assisted reproduction?

Professor Nordberg: There is an ongoing debate on the meaning of disability, which medical criteria are usually used to define. However, such criteria might differ from the patient’s own understanding of their condition. The patient’s view should also be taken into account.

The full statement can be viewed here.

The Trends Journal has been extensively chronicling the progressive introduction and “normalization” of transhuman and genomic experimentation and alterations.

Whether driven by ideological goals, or commercial profit motives, it’s clear the technology is quickly being mainlined, while governmental authorities are doing far less than they could to engage the public in higher awareness and debate over ramifications.