WHAT DO AMERICANS REALLY THINK ABOUT AI AND HUMAN GENE EDITING? 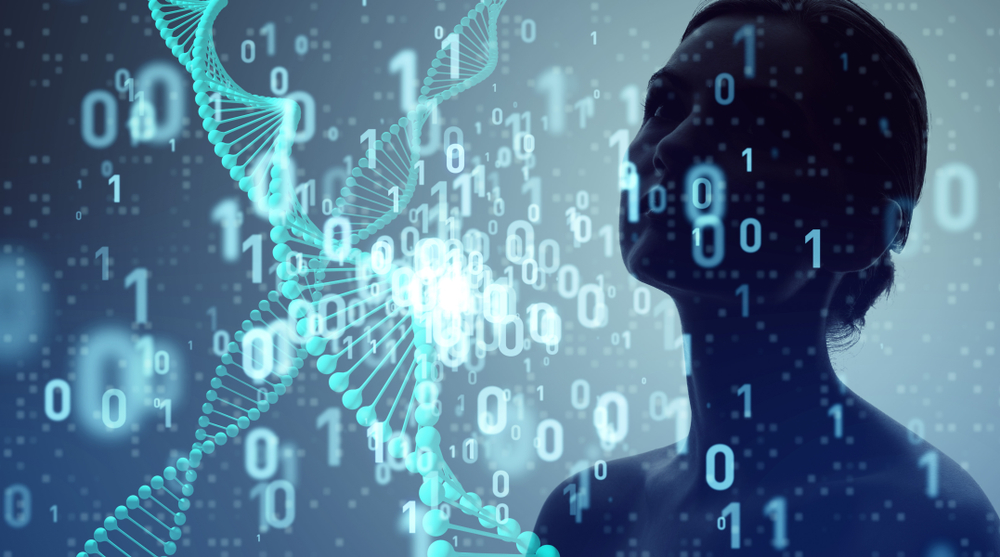 A Pew Research Poll from March reveals attitudes of Americans surrounding some of the most controversial aspects of technological “innovations” being pursued by technocratic interests.

The study posed questions about things like AI powered facial recognition, “transhuman” technologies like brain chip implants and robotic exoskeletons, and about heritable gene editing—a technology which would create genetically modified human beings that could pass on those modifications to future generations.

For those who believe that many of these technological pursuits hold significant or even existential dangers for natural human beings, some results of the Pew Research poll are dismaying.

Overall, people believe that many of these radical technologies will lead to human betterment, despite the erosion in freedoms, the forcing of experimental therapies on unwilling individuals, and the vast power and control imbalances between government-corporate elites and average citizens already exacerbated by such technologies.

Many Willing to Follow the Siren Song of Technological “Progress”

America has long been seduced by the idea of technological progress, though the 20th, and now 21st century are littered with some of the worst technocratic fueled mass exterminations and dehumanizing regimes in all human history.

It has reached a current point where:

Americans, by an overwhelming majority, believe the country is currently headed in the wrong direction.

Yet the Pew study reveals a disconnect between the deep pessimism people have about the state of the nation, and the role that technology has played in creating the vast distortions and dehumanizing erosion of prosperity and liberty for the average populace.

The study summarized several themes that characterized responses on a range of technology related questions.  One was that Americans are uncertain about various specific areas of AI, robotic and genomic technologies.

This suggests that many people remain either open to the prospects such technologies can provide—or perhaps, more likely, that they remain uneducated about the workings, issues and potentials surrounding the technologies.

In the absence of specific knowledge and understanding, a general bias toward accepting the general idea of “progress” could well have affected attitudes captured by the Pew study.

The following graph shows attitudes regarding some of the specific technologies canvassed by the study: 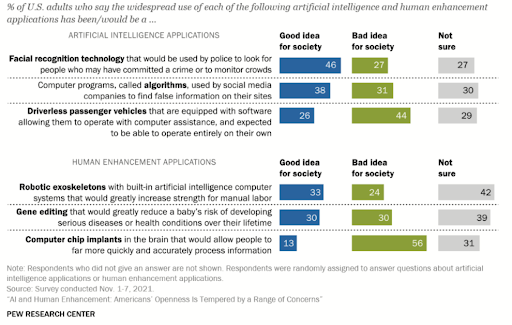 “For instance, 57% of Americans say the widespread use of brain chips for enhanced cognitive function would increase the gap between higher- and lower-income Americans, while just 10% say it would decrease the gap.”

Even technologies which received more neutral responses, such as gene editing to reduce risks of disease or maladies, were seen as likely leading to more stratification of society, not less.

One finding of the survey was that people had a healthy skepticism about heritable gene editing, and whether technocrats would be bound by limits in its usage.

Respondents answered two key questions on the subject as follows:

Even if gene editing is used appropriately in some cases, others would use these techniques in ways that are morally unacceptable:

Probably would NOT happen: 9%

Definitely would NOT happen: 5%

Development of these gene editing techniques would pave the way for new medical advances that benefit society as a whole:

Probably would NOT happen: 22%

Definitely would NOT happen: 8%

More Oversight Seen As Necessary.  But Is “Oversight” Enough?

The Pew research showed that large majorities of Americans agree that more oversight and public input is needed in some of the most controversial technologies referenced by the survey.

There was a distinct partisan divide between Republicans and Democrats over whether government should be more or less involved in regulating the technologies.

The Pew research noted that across all six technologies explored, a majority of Republicans and independents who lean Republican expressed more concern about government overreach, while a majority of Democrats and Democratic leaners were more apt to believe that there wouldn’t be enough government oversight.

But of course survey questions failed to really account for the fact that distinctions between government entities, corporations and highly influential NGOs (Non-Government Organizations) like the World Economic Forum (WEF), George Soro’s Open Society and the Bill and Melinda Gates Foundation are increasingly blurring the lines of who is controlling the direction of policy making in the current era.

The survey questions were arguably biased in other ways.  For example, it posed questions that queried about possible steps that would make technologies more acceptable to the public.

The survey found that large majorities would be inclined to be more accepting of even the most controversial technologies, if certain “safeguards” were included: 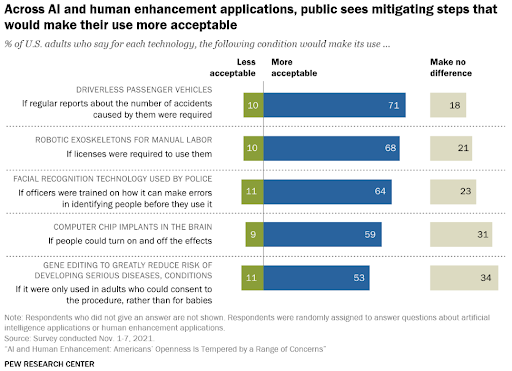 On the other hand, the study did not ask questions proposing steps that would limit or prohibit technologies likely to significantly threaten or undermine natural human existence and furtherance in the future.

There are currently a number of advocacy groups working to make the public aware of issues at stake in fields such as surveillance technology and human genomics and other genetic experimentation.

Groups like Electronic Frontier Foundation, censortrack.org (a human rights and censorship database) and The Center for Democracy & Technology all work in the area of invasive tech and unlawful and unethical surveillance.

The Center for Genetics and Society advocates for oversight and consideration of the implications of human genetic experimentation and research.  And the recent formation of a Europe Non-GMO Industry Association (ENGA), to develop and advocate on behalf of businesses committed to growing non-genetically modified foods has been a positive step.

But unfortunately, many advocacy groups in these important technology areas have small participation and limited influence.

What’s more, many groups are riddled with woke political objectives that distort and limit their efforts to narrow concerns, such as ensuring “equity” or preventing “disparate impacts,” rather than frankly opposing troubling technologies.

The American Civil Liberties Union (ACLU) has become a poster child for bias that undercuts much of its original “civil liberties” vision. In 2019 the organization joined with over 80 others in demanding that tech companies stop selling facial recognition and related surveillance technology to the U.S. government.

But the concerns of the organizations largely revolved around supposed racial biases.

The ACLU did issue a February 2022 statement opposing “blanket” use of cameras in public places. The organization said:

“The ACLU does not oppose placing cameras at specific, high-profile public places that are potential terrorist targets, such as the U.S. Capitol. But the impulse to blanket our public spaces and streets with video surveillance is a bad idea. The growing presence of cameras will create chilling effects that bring subtle but profound changes to the character of our public spaces.”

But the American public has a long way to go in terms of really becoming effectively proactive in realizing and responding to the troubling implications of technologies queried by the Pew Research technology poll.

For related reading, check out: