WEF TEAMS UP WITH TED TALKS TO PUSH DEGROWTH AGENDA 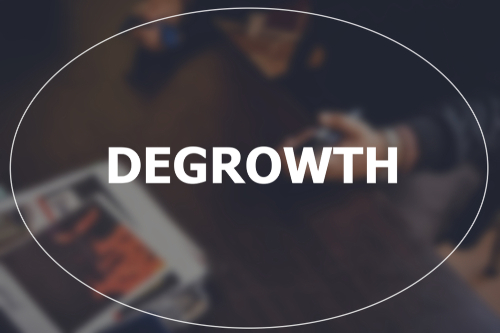 The World Economic Forum (WEF) is signaling again that modern elites don’t require the bulk of humanity. They want to save Earth for the few, and as Gerald Celente likes to say, quoting George Carlin:

A 1 September post on the WEF website is pushing the DeGrowth narrative further, this time with the imprimatur of a heady TED talk educational video laying out the case.

As a blurb for the TED-Ed video puts it:

“Created by world-class storytellers TED-Ed in collaboration with the World Economic Forum, this entertaining and informative film questions the idea of growth for growth's sake and imagines a world beyond it.”

The mask is off on Degrowth, the depopulation endgame that is the impetus for the outright attacks on energy and food production, war mongering in Europe and the Middle East, inexcusable funding of gain-of-function virus experiments, forced “vaccinations” with gene-level treatments, the ravaging of children with “gender transitions,” the transhuman drive toward an “AI singularity,” and more.

Inflation and lower standards of living for the vast majority of citizens the world over isn’t a bump in the road toward a sustainable future nirvana of wind and solar powered humanity, Treasury Secretary Janet Yellen’s disingenuous defense of the Inflation Reduction Act this past week notwithstanding.

No one should suppose that the masters of the universe are for “smarter” or “sustainable” growth.

The DeGrowth agenda is about (non-elite) humans making do with less.  And ultimately, it’s about less humans, period.

The TED video sets up a straw man premise, asking “Can the economy grow forever?”

Of course, humble everyday citizens of earth aren’t pondering ridiculous speculatives. They’re worried about where their winter heat is coming from, and how they’ll pay for it. They are concerned about exploding food and energy prices. They’re worried about the weapons and money being poured by the Biden Administration, with help from turtle Mitch McConnell, into a needlessly destructive, drawn-out Russia-Ukraine conflict.

The essential takeaway for non-elites should be clear. Don’t expect to consume according to your productivity, or to live in peace and freedom, or to procreate. Indeed, don’t desire any of these things.

Economic growth, and the continuance of a vibrant and energetic human civilization is a pestilence to be avoided, not a goal.

As elites see it, the short term pain of purging excess humanity via commodity squeezes, wars, inculcation of misanthropy into youth, is all for a far greater good.

The WEF’s greatest trick is that while relentlessly furthering the agenda of a very select group of the world’s richest, the organization pretends to have as its highest goal, democratic interventions to reduce “inequality.”

Of course there is nothing democratic about NGOs like the WEF, the Bill and Melinda Gates Foundation, and dozens of other mega billionaire funded orgs.

They uniformly advocate for destroying democracy by vesting power in more and more globalist, remote, and centralized authorities (controlled by them), which hopelessly diminishes the voting power of every citizen.

And the ever more stratified results of their policies, divided more and more starkly into ultra-wealthy haves, and increasingly impoverished and relatively powerless have nots, is virtually the story of the world since c. 1971, when the WEF was founded.

DeGrowth isn’t a bug (though it proposes eating plenty of bugs along the way). It’s a feature.

Joe Biden and Janet Yellen are very likely privy to that not-so-secret agenda.  Either that, or they and others like them are very stupid, useful stooges.

For more on the DeGrowth agenda, see: