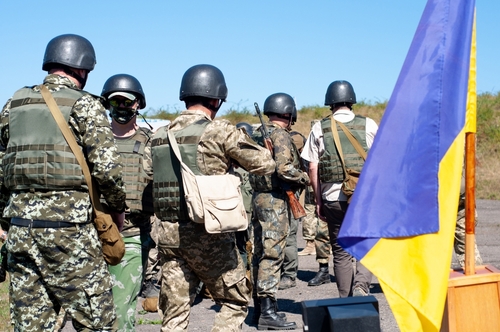 At the beginning of the Ukraine War, President Volodymyr Zelensky reportedly said he needed more ammunition, not a ride, and ever since then, the U.S. has been flooding Ukraine with a historic amount of weapons.

Antony Blinken, the U.S. secretary of state, said last week that Washington will send an additional $100 million in weapons to Kyiv in the Ukrainian effort to resist the Russian invasion.

Jake Sullivan, President Joe Biden's national security adviser, told NBC's “Meet the Press” on Sunday that the U.S. is doing everything it can, "working around the clock," to get Ukrainians the weapons that they requested.

“Given the nature of the battle, how things have shifted and adjusted and what the Russians have done, frankly—killing civilians, atrocities, war crimes—we have gotten to a place in the United States and across many members of the NATO alliance where the key question is, what does Ukraine need, and how can we provide it to them? That’s work we’re doing every day,” he said.

Blinken made the announcement after citing allegations of war crimes leveled against Russian fighters in Bucha, WSWS.org reported.

The website pointed out that the latest injection brings the total U.S. assistance to more than $2.4 billion since President Joe Biden took office and $1.7 billion since the start of the war. (See “WHITE HOUSE ASKS CONGRESS FOR $#2.5 BILLION TO FIGHT UKRAINE WAR AND COVID WAR” and “VICTORIA ‘FUCK THE EU’ NULAND, WHO SPEARHEADED OVERTHROW OF DEMOCRATICALLY ELECTED PRESIDENT OF UKRAINE IN 2014, STILL IN POWER.”)

WSWS.org reported that Blinken credited more than 30 countries for joining the U.S. in donating weapons to Ukraine.

Blinken noted that more than 30 countries, including the majority of NATO’s members and the European Union, have been funneling arms to Ukraine.

British Prime Minister Boris Johnson, who is being investigated by the Metropolitan Police over parties he held during COVID War lockdowns, diverted attention from his dirty dealings when he made a surprise visit to Ukraine on Saturday and met with Ukrainian President Volodymyr Zelensky in Kyiv.

But we have been calling for Kyiv to sit down and negotiate for peace. Russia has already identified its demands.

Its top demand is that Ukraine agrees to take a neutral stance and will not apply for NATO membership. Zelensky has already agreed to this requirement.

The BBC reported that Kyiv would also have to disarm, would have to deNazify, and must protect the Russian language in the eastern region of the country.

Russia has pulled its troops from Kyiv to focus on its offensive in the east.

Mykhailo Podolyak, a Ukrainian negotiator, told Reuters that there will be no meeting with Putin until “after the country defeated Russia in the east, which would bolster its negotiating position.”

Zelensky recently told Fox News that his country would not accept “any outcome” short of the defeat of the Russian invaders.

Johnson, who has been one of the most outspoken supporters of Ukraine, vowed more military assistance to Kyiv. Axois, citing his office, reported that the United Kingdom will send 120 armored vehicles and new anti-ship missile systems. He also promised an additional $500 million in lending from the World Bank.

Johnson said he hopes that the additional aid will ensure that Kyiv is never bullied or blackmailed again.

Zelensky praised Johnson in his nightly address on Saturday, saying "The leadership of the United Kingdom in providing our country with the necessary assistance, especially in terms of defense, as well as the leadership in sanctions policy will remain forever in history. Ukraine will always be grateful to Boris and Britain for this.”

The U.K. believes that the momentum is with the Ukrainian fighters and the flood of new weapons could give them the edge they need. The EU had pledged €1bn in military aid for Ukraine.

“The next three weeks will be critical,” one U.K. government official told the Times of London. “[The Ukrainians] have already partly won. They have exhausted the Russian army, won the battle of occupation and condemned Putin to eternal isolation. Can they push back the Russian army? Can they break the Russian army? Possibly. Depends on what help we can all give.”

Blinken said he was appalled by photographs that emerged from Bucha, that claimed to show dozens of civilians killed in the streets by retreating Russian forces that once occupied the city, which is located on the outskirts of Kyiv.

The WSWS.org report said the U.S. also admitted last week that it trained Ukrainian troops on how to use drones in war.

Zelensky also appealed to other countries to ban all Russian energy exports that he said is leading to Russia’s “self-confidence, their sense of impunity.”

Mike Rogers (R-AL), Ranking Member of the House Armed Services Committee claimed: “Our nation faces unprecedented threats from China and Russia, and it’s unconscionable that President Biden has chosen to, once again, shortchange our warfighters.”

He said Chinese President XI Jinping is watching as Biden “continues to falter…In fact, while China has the largest navy in the world and is rapidly expanding its nuclear arsenal…Luckily, Congress calls the shots when it comes to funding our military.”

GERMANY: Berlin has been tight-lipped about its military transfers to Ukraine. German Defense Minister Christine Lambrecht told DW.com that she would not reveal the equipment because it is classified.

“One must always bear in mind: The moment the deliveries are published in detail, Russia would also have this information. And that alone would have military strategic implications,” she said.

CANADA: Ottawa announced Saturday that it will send $100 million in aid to alleviate the ongoing refugee crisis in Ukraine, brining the total amount in humanitarian aid up to $12.4 billion.

CTV News reported that the latest injection is on top of the $90 million in “anti-tank guns, sniper rifles, night-vision goggles, armored vests and other military equipment already provided” to Kyiv.

SLOVAKIA: Bratislava will give Ukrainian fighters its air defense system as other countries vow more military aid after allegations of Russian war crimes on the battlefield.

"I can confirm that Slovakia donated the S-300 air defense system to Ukraine based on its request to help in self-defense due to armed aggression from the Russian Federation," Heger said in a statement obtained by Reuters.

The report pointed out that the donation was the first instance of an air defense system being donated by another country.

The report also stated the U.S. announced it will place a Patriot missile system in Slovakia that will be operated by U.S. troops.

Morrison did not say how many would be sent, but he told reporters that Australians are “not just sending our prayers.”

SWEDEN: Stockholm donated 10,000 anti-tank weapons, 5,000 helmets, and 5,000 body shields to Ukraine since the start of the war, Politico reported.

NORWAY: Oslo provided Ukraine with helmets and bulletproof vests in February. The government also imposed sanctions on Russia over its invasion.