WASHINGTON WANTS TO RAMP UP WEAPON SALES TO TURKEY 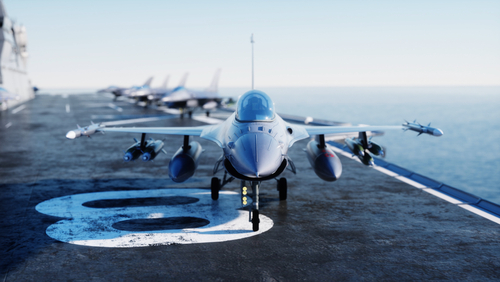 The Biden administration wants to send Turkey advanced weapons for its F-16 fleet and new jets as Washington and Ankara try to mend ties after years of tension.

The Wall Street Journal reported that the proposal calls for the shipment of 40 new F-16s to Turkey and other advanced weapons and equipment for its current fleet, which comes with a $6 billion price tag.

The paper reported that the relations between the U.S. and Turkey have been on edge after Ankara decided to choose Russia to produce its air-defense system in 2017, which sparked U.S. sanctions. The U.S. also removed Ankara from the F-35 fighter jet program.

The State Department said in a letter to Congress last month that a potential sale of F-16 fighter jets to Turkey would be in line with U.S. national security interests and would also serve NATO's long-term unity, Reuters reported.

The report pointed out that Ankara requested the jets back in October. The country also wants to purchase 80 modernization kits for its existing warplanes, the report said.

Turkey has taken on an important role in negotiations with Russia amid the Ukraine War but has also shown that it is willing to depart from U.S. positions on the conflict. Turkey has indicated that it will not support the push by Finland and Sweden to join NATO.

News of the F-16 parts deal reported by the Journal comes as Turkey tries to mediate peace between the warring countries.

Ibrahim Kalin, President Recep Tayyip Erdogan’s spokesman, told Al Arabiya in an interview that Ankara spoke out against the Russian invasion of Ukraine but it will do no good to take a more punitive stance against Russia. It has opposed Western sanctions on Moscow and sent weaponized drones to Ukraine.

“They need someone—a trusted partner, negotiator, facilitator, moderator—someone in some position to be able to speak to the Russian side as well as to the Ukrainian side,” he told Reuters. “We have been able to maintain this position since the beginning of the war and I think it is really in everybody’s shared interest that everybody maintains a balanced position.”

TRENDPOST: It is unclear if Congress will embrace the proposal. Lawmakers have expressed concerns about getting too cozy with Erdogan.

"Turkey is a critical NATO ally, and so I have an open mind on allowing them to buy the F16, but it will take substantial convincing. I'm not there yet," said Sen. Jim Risch, the ranking Republican on the Foreign Relations Committee.

As we point out in this issue, the tension between Turkey and Greece, another NATO member, has been higher than usual over festering maritime disputes and Turkey’s reluctance to have Finland and Sweden join NATO.