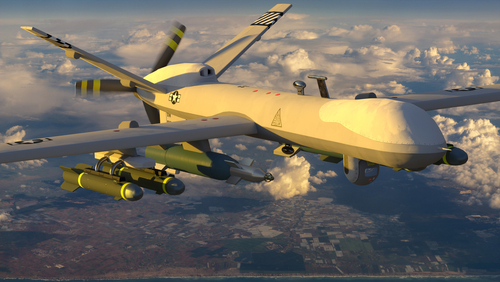 Western countries continue their historic effort to arm Ukrainian fighters with weapons and ammunition in hopes that Kyiv will be able to expel the invading Russian forces.

Ukrainian President Volodymyr Zelensky on Sunday continued his appeal to NATO for new weapons. He continued his appeal for about 1 percent of the tanks and aircraft that he said are sitting in storage facilities and "covered with dust." (See “UKRAINE’S AZOV BATTALION: ‘NAZI’S OR ‘FAR-RIGHT? DON’T CALL A SPADE A SPADE.”)

"Ukraine cannot shoot down Russian missiles using shotguns," Zelensky said. He said it is "impossible to unblock Mariupol without a sufficient number of tanks, other armored vehicles and, of course, aircraft.”

Most of NATO's weaponry intended for Ukraine is being flown in from a commercial airport in the Polish border town of Rzeszow. The Wall Street Journal described a steady flow of cargo planes and the pace is expected to increase as countries continue to donate weapons.

“What you see is basically a constant cycle of these enormous C-17 military cargo planes landing, unloading their cargo, taking off again, day and night," Simon Shuster, a Time magazine reporter, said. “Standing there, there is a bit of a feeling in the pit of your stomach that we are on the edge of a really era-defining war. We're already in it.”

TRENDPOST: Gerald Celente, the publisher of the Trends Journal, accused the United States and NATO of prolonging the war by sending more armaments to Ukraine that will prolong the war, lead to more deaths and destruction of the nation rather than taking ceasefire measures to negotiate for peace.

Celente has pointed out that Napoleon sent 420,000 brave young men to defeat Russia and 410,000 were killed. He also pointed to Hitler’s Operation Barbarossa campaign that resulted in the deaths of 27 million Russians, who still ended up defeating Germany.

“You think Biden & NATO can beat Russia? Stop the senseless murder!” he posted on Twitter.

And Mr. Celente is among the very few calling for peace, and for nations to stop sending military armaments to Ukraine and end the needless death and destruction. He has said that the U.S. and NATO cannot defeat Russia in a military conflict.

Vadym Prystaiko, Ukraine’s ambassador to the U.K., said the country is running low on long-range weapons and Zelensky will try to secure new shipments.

NATO leaders have been trying to determine what weapon transfers Russia would tolerate from the West, and seem to draw the line at fighter jets.

“Any cargo moving into Ukrainian territory which we believe is carrying weapons would be fair game,” he said, according to the paper. There is no evidence that Russia hit any of these transfers.

The U.S. has thus far provided Ukraine with $350 million in anti-tank weapons and other artillery. Congress has recently approved $200 million more in immediate assistance. (See “WHITE HOUSE ASKS CONGRESS FOR $32.5 BILLION TO FIGHT UKRAINE WAR AND COVID WAR,” “BIDEN SAYS PUTIN MUST PAY PRICE OVER INVASION IN UKRAINE” and “PRESIDENT ZELENSKY SAVES HIS BEST ACT FOR U.S. CONGRESS DURING VIDEO.”)

Germany promised last week to send Ukrainian fighters 2,200 Soviet-era antiaircraft missiles and also provided 2,700 hand-held weapons, according to the WSJ. About 500 were dysfunctional, the report said.

The Czech Republic also gave Kyiv about $500 million in military gear that will be sold to the U.S. and then transferred to Ukraine, the paper said.

TRENDPOST: It is all war all the time. U.S. President Joe Biden visited Poland last weekend and did the standard "war-time" president poses.

There was one picture of him holding a Ukrainian refugee, a girl about 4 years old, and then other images showed the president sitting down with his troops and sharing a pizza.

It brought back memories of former President George W. Bush's unannounced Thanksgiving Day visit to U.S. troops who were stationed in Baghdad in 2003.

Biden told the paratroopers stationed in Rzeszow that they will get to see the bravery of the Ukrainian fighters first hand "when you're there."

A White House official told The New York Post that the president did not change his position on sending troops into Ukraine to fight Russians and said "Biden has been clear we are not sending US troops to Ukraine and there is no change in that position.”

Unfortunately, Biden's gaffes during the trip did not end there. The White House was later forced to clarify what he meant when he said Putin cannot stay in power.

NBC News pointed out that Biden "has hurled invective at Putin throughout the crisis in Ukraine, labeling him a “murderous dictator” and a “war criminal,” but has previously stopped short of calling for his removal from power."

That was then. Last Saturday, Biden announced to the world that Russian President Vladimir Putin “cannot remain in power.”

On the regime change front, a White House official later told reporters that Biden was not talking about regime change in Moscow but was instead referring to Putin's ability to "exercise power over his neighbors or the region." (See “POT CALLS KETTLE BLACK: BIDEN CALLS PUTIN A 'WAR CRIMINAL.’”)

French President Emmanuel Macron seemed to distance himself from Biden's rhetoric. (It should be noted that Biden has called Putin a "killer," and "brute," and his anti-Russian rhetoric during the 2020 campaign prompted Putin to urge restraint.)

"I wouldn't use this type of wording because I continue to hold discussions with President Putin," Macron said Sunday during an appearance on France 3 TV channel. "We want to stop the war that Russia has launched in Ukraine without escalation—that's the objective."