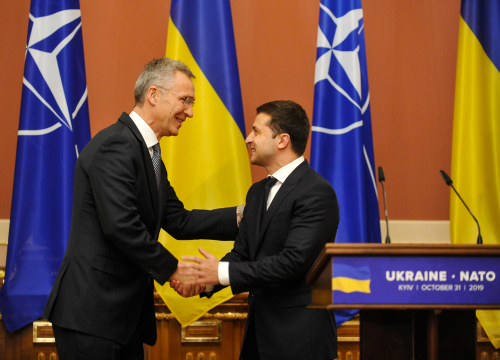 Jens Stoltenberg—a Daddy’s boy from an entrenched Norwegian political family who has been sucking off the public tit his entire life and now NATO’s Secretary-General—said last Thursday that Ukraine’s war against Russia may very well carry on for years, promising to keep the fighting going until Ukraine’s beat the Russians.

“We need to be prepared for the long term,” he said, “There is absolutely the possibility that this war will drag on and last for months and years.”

Liz Truss, the United Kingdom's foreign secretary, said last week that the war in Ukraine could last up to 10 years. Ignoring the fact that by keeping the war going more people will be killed and cities destroyed, Truss said the West cannot allow Russian President Vladimir Putin to succeed because a Russian victory would lead to “untold further misery across Europe and terrible consequences across the globe."

President Joe Biden announced last week that he will ask Congress to approve $33 billion in new funding for Ukraine, which is further indication that there seems to be no real end in sight. As we point out this issue, Defense Secretary Lloyd Austin said the U.S. hopes the war will leave Russia a weakened country.

Politico wrote that Biden’s request “sends a signal to Russia that the United States intends to back Ukraine in the fight for the long run.” The report pointed out that Biden said the funding will begin “the transition to longer-term security assistance that’s going to help Ukraine continue to defend against Russian aggression.”

Continuing its oil-waffle as to whether they would stop buying Russian oil and gas, Germany, which saw its producer price index soar to an unprecedented record high of 30.9 percent as a result of the embargos on Russian products, announced Monday that it was ready to support an immediate European Union embargo.

TREND FORECAST: The United States will not enter into a one-on-one military conflict with Russia or China. Indeed, they could not even beat the Taliban or win the “Mission Accomplished” Iraq war. Yet, it will continue to ramp up the Ukraine War and promote vitriol that is not only aimed at the Kremlin and Putin, but as we noted in the article in this Trends Journal, “RUSSIAN ARTISTS LOSE JOBS FOR BEING RUSSIAN AFTER UKRAINE INVASION”... and its sanctions imposed on Russia has rapidly escalated inflation across the commodities spectrum.

The best way the U.S. can achieve its stated goal of weakening Russia is by making sure the war drags on as long as possible, and the funding ensures that it will not end anytime soon. However, as we had forecast, the more the U.S. and NATO ramp up the Ukraine, the quicker the U.S. and NATO will ignite WWIII.