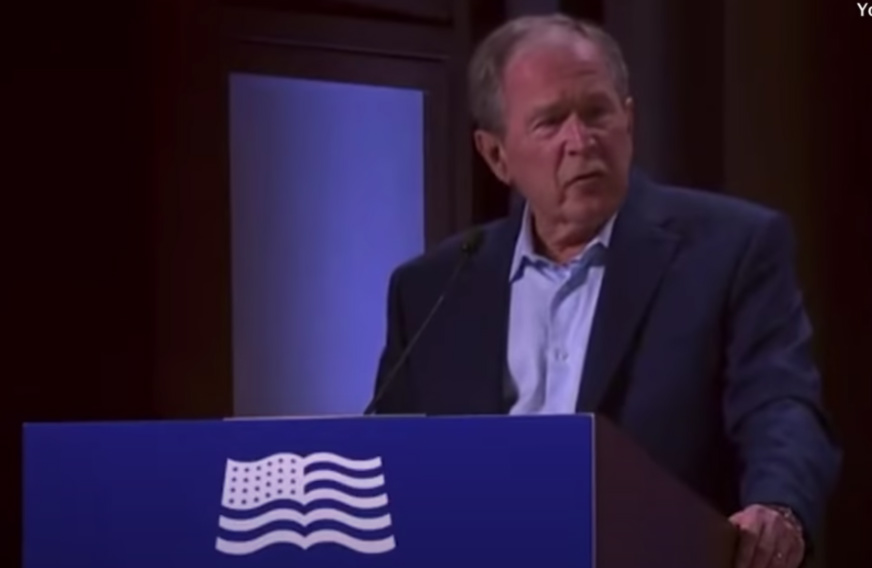 George W. Bush, told the truth of his war criminality last week while addressing a Dallas audience to talk about Russia’s invasion of Ukraine.

Bush spoke about the shortcomings of the Russian government and how Moscow has no system of checks and balances that would prevent an individual like Russian President Vladimir Putin from launching “a wholly unjustified and brutal invasion of Iraq.”

Bush caught himself, and told the audience, “I mean, of Ukraine.”

He tried to move on and said, under his breath, "Iraq, too."

Bush was president when he directed the invasion of Iraq in 2003 based on bogus evidence that Saddam Hussein was hiding weapons of mass destruction that threatened America.

Another little boy, born on third base and thought he hit a home run, Georgie “Daddy’s Boy” Bush, prior to his invasion that has killed around one million Iraqis, was heard on national TV back in June 2001 telling Swedish Prime Minister Göran Persson that Hussein “Tried to kill my daddy!"

Bush has largely stayed out of politics since his presidency and now spends most his days painting portraits and getting his daughters plum gigs at corporate newsrooms while Iraq continues its socioeconomic and political decline. (See “LANDMINE MURDERS IN IRAQ=WASHINGTON’S LOVE OF WAR, EXPERTS SAY.”)

This is not the first time that he spoke out about the Russian invasion, and held a Zoom meeting with Ukrainian President Volodymyr Zelensky. He called Zelensky the “Winston Churchill of our time.”

"President Zelensky assured me that they will not waver in their fight against Putin’s barbarism and thuggery," Bush said in an Instagram post. "Americans are inspired by their fortitude and resilience."

David Sirota, a former speechwriter for Vermont Sen. Bernie Sanders’ presidential campaign, took to Twitter after Bush’s gaffe to criticize the result of the Iraq War in the U.S.

“George Bush is laughing in this clip because he knows he and every other Iraq War supporter were rewarded with riches and big media jobs for their work killing a million people, rather than being held accountable and shunned,” he tweeted.

TRENDPOST: George Bush’s gaffe elicited laughter in the audience, which shows how insignificant the tremendous loss of life in Iraq and the mass destruction of the nation means to so many Americans.

The only body count that matters is how many Ukrainians have died at the hands of Russian soldiers, which matter. Each of those lives mattered, but so did the innocents who died due to failed U.S. policy or its military in Syria, Yemen, Afghanistan, and Libya.

Yet, unlike the long series of America’s murderous war that have raged on for decades that ravaged nations and killed millions, the U.S. media that now deeply covers the Ukraine War daily and shows photos and clips of the death and destruction... but never showed America’s daily war atrocities.

In February 2003, one month before the invasion of Iraq, Gerald Celente, the publisher of the Trends Journal, said in a Trend Alert to subscribers: "While victory on the battlefield may be swift, considering the massive military power of the US, the war against Iraq will eventually be lost… They will not let the U.S., or any western sympathizer, run their country. So, while it may appear that victory is at hand, the battle will have just begun and the war won't stop at the Iraqi borders.”

A year later (May 2004), in a special edition of the Trends Journal dedicated to Iraq, Celente observed that, “Iraq never was, and most likely never will be, a Western model democracy.” He called out every pertinent lie, deception and misrepresentation of fact that political leaders delivered, and too many in the media bought into, that twisted the real facts behind the roots of turmoil in Iraq into a fantasy that, he predicted, would make “terrorism” the new “Communism.”

For his prescience, Celente became persona non grata for the mainstream media, no longer welcome on TV programs where he had long been a regular. “The press was complicit with government aims,” said Celente. “They were getting pressure from the top, from their corporate owners, and they folded.”

A study by FAIR (Fairness and Accuracy In Reporting) bears Celente out. The study found that in the three weeks after the start of the invasion, the ratio of pro-war US TV guests to anti-war guests was 25 to 1 and that 68 percent of the pro-war guests were current or former government officials.

Those same pressures on the media are being applied today with the invasion of Ukraine. Media companies refuse to even acknowledge that Putin called NATO’s expansion east a threat to Russia and this war is not completely "unprovoked."