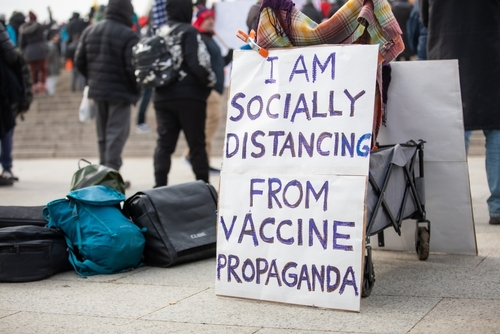 Harris has had a bumpy tenure as vice president. Her critics say she knows little about policy and her effort at the southern border has been a failure. The New York Times said abortion could be the first issue popular among democratic voters that “plays to her strengths and is central to the future of her party.”

The paper said she galvanized an audience during her speech to an abortion-rights group called Emily's List, and “with three words” “insert herself forcefully” into the debate about the 1973 ruling that legalized abortion across the U.S.

She asked, “How dare they?”

Harris was referring to a leaked draft Supreme Court opinion that overturned the landmark abortion ruling. The leak was seen as an affront to the court and sparked massive pro-choice protests at the homes of various Supreme Court justices, including Samuel Alito, who wrote the draft opinion.

Democrats like Harris have seized on the leak as an example of what would happen if Republicans take back control of Congress. The Biden administration faces historic levels of inflation, soaring gas prices, and a stalemate in Ukraine, and needs to rev up the base.

“Women in almost half the country could see their access to abortion severely limited,” Harris said during the speech. “In 13 of those states, women would lose access to abortion immediately and outright. Those Republican leaders who are trying to weaponize the use of the law against women, well we say ‘How dare they! How dare they tell a woman what she can do and cannot do with her own body. How dare they!’”

The Hill, citing sources, reported that Harris added the “How dare they” part to the speech. One source told the magazine that the public will continue to hear Harris speak out forcefully for women's rights.

Harris’s comments about a woman’s right to choose stand in stark contrast to her support of forcing COVID-19 vaccines on the population.

Harris was a chief supporter of President Joe Biden's vaccine mandate that was directed at those in the military and workers for federal contractors. The Biden administration also had a mandate directed at private employers that had 100 or more employees.

Harris said in June that COVID-19 vaccinations are how to “love thy neighbor.”

TRENDPOST: We note Washington’s and the massive marches of people who have championed the COVID Jab, but with pure hypocrisy, claiming “My Body, My Choice only accounts for abortions, but permits governments to force people to be inoculate with whatever they chose is “mandatory.”

And, we have covered this and other coronavirus vaccine issues extensively . (See “YOU ARE WRONG IF YOU BELIEVE ALL VACCINES ARE SAFE AND EFFECTIVE,” “MAJORITY OF AMERICANS WOULD RATHER QUIT THEIR JOBS THAN TAKE THE JAB. WILL THEY BACK DOWN?” and “COURT BLOCKS BIDEN VACCINE MANDATE.”)

TRENDPOST: The Biden administration made it clear that Americans who were unwilling to roll up their sleeves to take the “Operation Warp Speed” jab would not be able to live a normal life. These individuals faced the prospects of losing their jobs and were barred from entering various locations.

Harris joined the long line of hypocrites in government that stood up strongly against the Roe v Wade draft but forced Americans to take an experimental vaccine.

“All Americans should realize that this is a direct assault on the freedom of women,” Harris said. “And it is an attack that can affect all Americans. There are some extremist Republican leaders who clearly want to punish and criminalize women. And you have to look no further than some of the laws that have already been passed to know that it's true.”

TREND FORECAST: Harris has aspirations to be President of the United States and she knows that her boss is an unpopular president who is 79 years old. She wants to be the party standard-bearer and needs to start making a name for herself if she hopes to run for president again.

Being that the Biden administration is viewed as ineffective in bringing down inflation and strongly boosting the economy, Harris will seize upon abortion rights because there seem to be only two things she can use to unite her front: Ukraine War support and pro-abortion.