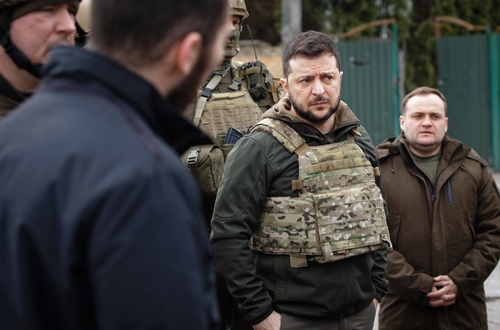 Besides a video showing himself off as the imbecilic little freak that he is, former U.S. President George W. Bush offered a frightening glimpse into both the depravity himself and of U.S. foreign policy.

Captured on video, in a purported prank as reported by Reuters, Georgie Bush told the pranksters that the job of President Volodymyr Zelensky is to “destroy as many Russian troops” as possible.

A spokesman for Bush did not immediately respond to an email from The Trends Journal. Newsweek also said it reached out to Bush’s office and did not hear back.

Bush appears to be relaxed in the video and is dressed in a sport coat and polo shirt. He gets peppered with questions from the voice he apparently believes belongs to the Ukrainian president. It was instead Vladimir Kuznetsov and Alexei Stolyarov, two Russian pranksters who have in the past denied working for the Kremlin, reports said.

Bush admitted that he never wanted Russia to join NATO, but did want Ukraine to join the alliance during his presidency.

"I wanted Ukraine into NATO," Bush said, according to the purported video. He said he wanted Russia on the fringe of the alliance. “I thought for a while Russia would be more cooperative. And then [Russian President Vladimir] Putin changed dramatically.”

Bush also said that it was his belief that Putin would prefer to sit on the fringe to make sure that the alliance was acting in a defensive manner and not going on the offensive.

“Zelensky” could be heard bringing up the topic and trying to play it down as the Russian “narrative.” “Zelensky” brushes off the claim and said it would be completely incorrect given the threat Russia poses on the world.

“Yeah that’s right, that’s right,” Bush said, according to the video. “Listen, times change. Baker, you know, was the Secretary of State for my dad, which was years ago. And so, The United States must be flexible, adjusting to the times.”

Bush appeared to confirm reports that said then-Secretary of State James Baker, who served under his father, George H.W. Bush promised Soviet President Mikhail Gorbachev that NATO would not expand eastward following the deal made during the 1990 negotiations between the West and the Soviet Union over German reunification.

TREND FORECAST: The behavior of George Bush in the video shows the low level leadership that America has sunk down to. And, the mainstream media—who get paid to put out by their government whoremasters – disregard and/or cover up the ignorance and arrogance of the cast of clowns ruling the nation.

And for all those who believe there is a secret cabal running Washington, in this video and others by Bush it shows who decides what. Bush declares what “I” want to do. Yes, the one “I” has it and the rest of the nation must obey... in America, the country that pretends to be a “democracy” that invades countries across the globe and kills millions in the name of “democracy.”

We illustrate this to further support our Trend Forecast of the end of Empire America: “The business of America is war, while the business of China is businesses. The 20th century was the American century, the 21st will be China’s.”

Therefore, agree or disagree with Vladimir Putin’s statements, in the Western media there is just one side to the Ukraine War: Russia aggression.

Totally ignored, as we have greatly detailed over the decades, is the United States and NATO actions that were, to Russia, moves of aggression.

Indeed, in his 9 May Victory Day speech, Russian President Vladimir Putin said,  “We saw how the military infrastructure was unfolding, how hundreds of foreign advisers had begun to work there, with the most modern weapons being regularly delivered from NATO countries," he said. "The danger was growing every day. Russia offered a pre-emptive rebuff to the aggression—this was a forced, timely move and the only correct decision, one taken by a strong and independent country."

Long forgotten was the U.S. and NATO’S pledge not to expand into Eastern Europe following the deal made during the 1990 negotiations between the West and the Soviet Union over German reunification.

Therefore, “According to transcripts of meetings in Moscow, in the view of Russia, it is taking self-defense actions to protect itself from NATO’s eastward march.”

As detailed in The Los Angeles Times back in May of 2016, while the U.S. and NATO deny that no such agreement was struck, “...hundreds of memos, meeting minutes and transcripts from U.S. archives indicate otherwise.”

“Feb. 9, then-Secretary of State James Baker suggested that in exchange for cooperation with Germany, the U.S. could make ‘iron-clad guarantees’ that NATO would not expand ‘one inch eastward.’ Less than a week later, Soviet President Mikhail Gorbachev agreed to begin reunification talks.

“No formal deal was struck, but from all the evidence, the quid pro quo was clear: Gorbachev acceded to Germany’s western alignment and the U.S. would limit NATO’s expansion.”