VICTORIA “FUCK THE EU” NULAND WHO SPEARHEADED OVERTHROW OF DEMOCRATICALLY ELECTED PRESIDENT OF UKRAINE IN 2014, STILL IN POWER 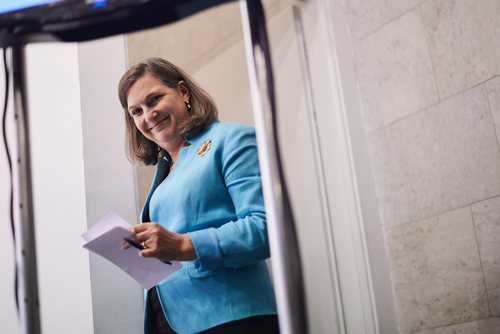 Victoria Nuland, the undersecretary of state for political affairs, is playing a key role in the U.S.’s response to the current crisis in Ukraine despite a controversial history that included orchestrating the overthrow of a democratically elected president in Ukraine that led to a civil war.

Salon ran a profile on Nuland last year that expressed dismay over her appointment to such an important position in the State Department. The article was titled “WHO IS VICTORIA NULAND? A REALLY BAD IDEA AS A KEY PLAYER IN BIDEN’S FOREIGN POLICY TEAM.”

The magazine said Nuland is “stuck in the quicksand of 1950s U.S.-Russia Cold War politics and dreams of continued NATO expansion, an arms race on steroids, and further encirclement of Russia.”

The article pointed out that Nuland’s resume includes her role as foreign policy adviser to former Vice President Dick Cheney from 2003 to 2005.

The Trends Journal published an article on 24 February 2015, titled, “RUSSIA, EU MAKE TRADE, NOT WAR,”  that pointed to a troubling phone call that reportedly included Nuland, who was Obama’s assistant secretary of state for European Affairs, and Geoffrey Pyatt, the U.S. ambassador for Ukraine.

In early February 2014, a recording was leaked of Assistant Secretary of State for European Affairs, Victoria Nuland, telling Geoffrey Pyatt, the US Ambassador to Ukraine, that the UN was on board to "help glue" the plan to replace Ukrainian President Victor Yanukovych with Arxeniy Yatsenyuk. "Yats is the guy," Nuland informed Pyatt who urged her to move quickly because "the Russians will be working behind the scenes to torpedo" the deal.

Shortly thereafter, Yanukovych was overthrown and "Yats" became president. Ukraine agreed to Nuland's demands to make "a new deal with the IMF," which was "necessary for the long term economic health of the country." Yet, the new Western-leaning Kiev government did not represent the Russian-speaking Ukrainians in the east and south who had voted Yanukovych into office.

Nuland’s call went viral at the time and the U.S. blamed Russians for tapping the line and Nuland kept her job despite criticism from world leaders like former German Chancellor Angela Merkle.

Nuland and her neocon husband, Robert Kagan, were said to have fallen in love on one of their first dates while talking about “democracy and the role of America in the world,” the Brooking’s Institute reported.

She recalled a time when they were young and in love. She was stationed in Moscow from 1991 until 1993 and he was working on his first book about Nicaragua in their spare bedroom.

“The KGB used to rifle his office regularly―we could tell by the lingering stench of cigarettes and body odor. They couldn’t fathom that he was really just a writer,” she recalled.

Her career took off and she held some of the highest diplomatic positions—including becoming the first female ambassador to NATO in 2005.

Kagan, a senior fellow at the Brookings Institution, has been an advocate for just about every U.S. foreign policy blunder over the past two decades. He was an advocate for the war in Iraq and a muscular approach to Syria. The New York Times reported that his father, Donald Kagan, “a historian of ancient Greece, is a patriarch of neoconservatism.”

Kagan wrote an article in The New Republic in 2014, titled “SUPERPOWERS DON’T GET TO RETIRE.”

“If a breakdown in the world order that America made is occurring, it is not because America’s power is declining—America’s wealth, power, and potential influence remain adequate to meet the present challenges. It is not because the world has become more complex and intractable—the world has always been complex and intractable. And it is not simply war-weariness. Strangely enough, it is an intellectual problem, a question of identity and purpose.”

New Europe published an article that said it is the shared Washington worldview that Nuland and her husband maintain that led to the current tension in Ukraine. James W. Carden, a former adviser to the State Department, pointed to Harvard University’s Stephen Walt who once said, “Being a Neocon Means Never Having to Say You’re Sorry.”

Carden pointed to how Kagan and Nuland’s careers have blossomed despite obvious criticisms. Nuland was accused of becoming more of an activist for Ukraine’s pro-democracy movement about a decade ago.

“Part of the reason the U.S. is at grave risk of a war with Russia—and there is precious little debate about the policies that have brought us to this point—is that foreign policy in Washington is conducted by a virtually closed circle. And that circle is dominated by people like the Kagans,” he wrote.

Nuland addressed the U.S.-Ukraine Foundation Conference in Washington, D.C. back in December 2013 and talked about the “historic” challenges that Ukraine faced when it seemed to be slowing its embrace of Europe.

She was fixated on Ukraine’s turn toward Europe instead of Moscow and praised a protest that was growing against Yanukovych’s decision to “pause on the route to Europe.”

“Since Ukraine’s independence in 1991, the United States has supported Ukrainians as they build democratic skills and institutions, as they promote civic participation and good governance, all of which are preconditions for Ukraine to achieve its European aspirations. We’ve invested over $5 billion to assist Ukraine in these and other goals that will ensure a secure and prosperous and democratic Ukraine,” she said, while standing at a rostrum in front of Chevron and Exxon Mobil signs.

Yanukovych's ouster was from that point almost certain. Russia called his removal a "neo-fascist" coup that was coordinated by the West and "dressed up as a popular uprising," The New York Times reported.

TRENDPOST: As we have reported, completely absent in the American media reports of the current U.S. stand with Ukraine is the role Washington and Victoria Nuland played in the overthrow of its government in 2014.

TRENDPOST: We also note this article to illustrate who is in charge of Washington and the so-called peace Institutes.  From 1998 until August, 2010, war-hawk Kagan was a Senior Associate with the Carnegie Endowment for International Peace. He was appointed senior fellow in the Center on United States and Europe at the Brookings Institution in September 2010.

As detailed in Wikipedia:

“In January 2002, Kagan and [William] Kristol falsely claimed in a Weekly Standard article that Saddam Hussein was supporting the ‘existence of a terrorist training camp in Iraq, complete with a Boeing 707 for practicing hijackings, and filled with non-Iraqi radical Muslims.’

“Kagan and Kristol further alleged that the September 11 hijacker Mohamed Atta met with an Iraqi intelligence official several months before the attacks.[17] The allegations were later shown to be false.”