VAXXED NYC JUDGES COME DOWN WITH COVID AFTER BEACH RETREAT 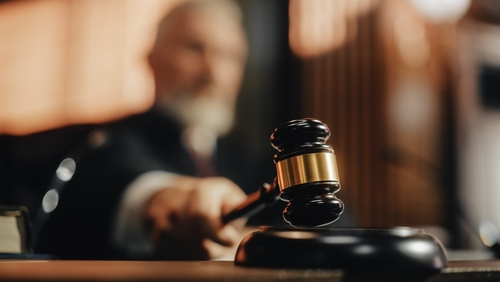 The “Got fully jabbed, got the virus” comedy club continues.

At least 20 vaccinated New York City judges came down with COVID-19 during an annual, three day retreat on Long Island that included about 70 judges.

The judges who came down with COVID during their trip to Gurney’s Montauk Resort last week are able to return to the courtroom as long as they are not exhibiting symptoms and wear masks, The New York Times reported.

Lucian Chalfen, a spokesperson for the New York Office of Court Administration, told the paper that none of the judges were seriously ill.

It was not clear when the infection spread, but the Times, citing a person familiar with trip, said the judges took part in karaoke and “several judges were particularly enthusiastic.”

The state's court system has a vaccine mandate in place for its 15,000 staff members and 3,000 judges. About 100 workers lost their jobs for non-compliance. Four judges refused the vaccine and were barred from entering court rooms, and had to hear cases over video conference.

New York City, like other municipalities, has been dealing with a backlog of criminal cases due to the COVID-19 outbreak and subsequent lockdowns. The Times pointed out that at one point in 2020, New York City had nearly 40,000 pending cases, and the number is still believed to be high.

The Centers for Disease Control and Prevention said COVID cases have nearly quadrupled over the past six weeks in the U.S. and there could be a spike during the next few months. About a third of the U.S. is currently considered to be a high-risk location. News of the judges' outbreak broke as the U.S. surpassed one million confirmed deaths from the virus.

TRENDPOST: The Trends Journal has long reported that the “flatten the curve: lockdowns, draconian COVID-19 mandates and forced Operation Warp Speed jabs have not stopped the coronavirus.

And, the fact that these asymptomatic judges can return to the bench as long as they were in the mask while healthy unvaccinated judges can't walk through the door shows these rules have nothing to do with science and are instead based on political science.

The U.S. has a higher rate of infection than most other wealthy countries, and we reported earlier this month that Sweden, which did not enforce any sweeping lockdowns, fared far better. (See “SWEDEN WON. THEY DIDN’T FIGHT THE COVID WAR.”)