VAX WAR: THE SHOT HEARD AROUND THE WORLD 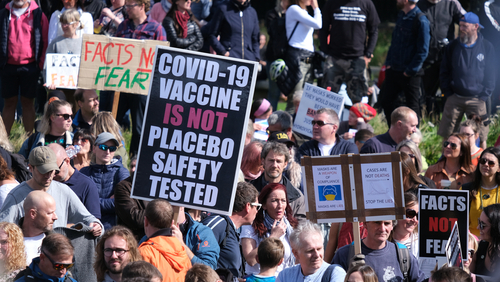 Over the weekend, hundreds of thousands of citizens took to the streets in protest of being forced to get the COVID Jab or lose their jobs and freedom.

Governments are reinstating lockdown orders while applying new pressure on the unvaccinated to get vaccinated.

TREND FORECAST: These massive demonstrations that are barely reported by the mainstream media, are just the beginning of a major march to Freedom... a shot that will be heard around the world. And, as we had forecast, new anti-vax, anti-establishment movements are now rapidly accelerating.

These are some of the demonstrations that took place this weekend in protest of COVID19 restrictions being imposed upon those who refuse to get the Operation Warp Speed gene therapy inoculation:

CZECHIA: Thousands of protesters took to the street in Prague on Thursday to voice outrage over new COVID-19 guidelines that bar the unvaccinated from society.

“Not even communists dared to do what is happening here today,” Marketa Irankova, a protester, told Euronews. “I really don't have any freedom anymore. Restricted traveling from one region to the other last year, prohibiting children to do sports and visiting schools-- this is not freedom. A totalitarian system starts here again.”

Andrej Babiš, Prague’s outgoing prime minister, said citizens who refuse the vaccination are selfish and these new restrictions were required because the ones in place did not go far enough to stop infection. Starting yesterday, the unvaccinated will not be allowed at sporting events, stay in hotels, cannot visit restaurants, bars, movie theaters, museums, hairdressers, etc.

“These people who don't get vaccinated and end up in hospitals are endangering health care for other citizens,” Babiš said.

Adam Vojtech, the country’s health minister, said there is a risk that the hospitals in the country will be overwhelmed. He urged companies to cancel holiday parties and allow employees to work from home.

Czechia is home to about 11 million people and the country’s rate of infection jumped to 813 new cases per 100,000 residents in a seven-day span last week. The rate was 558 the previous week, The Associated Press reported. The wire service said 57.9 percent of the country is vaccinated, which is lagging behind other European countries.

Euronews reported that protesters in Prague did not wear facemasks or follow social-distancing guidelines. The news outlet pointed out that the protest was on the same day that the country marked the anniversary of the anti-Communist Velvet Revolution in 1989.

On Monday, they were out in the streets again, thousands marched through Prague, condemning the draconian government mandates.

Carrying posters with pictures of politicians and health bureaucrats, calling them traitors for imposing their dictates, the crowd shouted what has become the global chant of the COVID War protesters: “Freedom!”

NETHERLANDS: Police in Rotterdam on Saturday opened fire during an anti-lockdown protest and three people were rushed to nearby hospitals.

Reuters reported that a group of several hundred rioters lit fireworks and set cars on fire. Some protesters threw rocks at police officers during the protest the prior night.

“Three rioters were wounded when they were hit by bullets,” Dutch police told Reuters. “They remain in hospital.” The report said 51 people were arrested and five police officers were injured.

Since the start of the COVID-19 outbreak, the Trends Journal has been tracking anti-lockdown protests in European cities. Saturday’s protests in major European cities were among the largest. The mainstream media has written off many of these protests as nothing more than rallies for right-wing parties. Many of the protesters say governments are taking a chainsaw to an issue that should be handled with a scalpel.

Ahmed Aboutaleb, Rotterdam’s mayor, said police were forced to open fire because they had to defend themselves from the mob. Riots also broke out in Urk. This is not the first time that Dutch police responded with violence during these protests. (See our 16 March 2021 report, titled, “DUTCH COVID COPS BEAT LOCKDOWN PROTESTERS.”)

The government imposed the first partial lockdown among western European nations since the summer. The latest lockdown will last for three weeks and will include curfews on bars, restaurants, and essential shops. The report said that social gatherings at homes will also be limited to four.

On Sunday the police estimated another 35,000 people took to the streets in central Brussels chanting “Freedom, freedom, freedom!” and singing the fight for liberty anti-fascist song Bella Ciao.

GERMANY: Germany, which has a higher vaccination rate than the U.S., is dealing with a surge in COVID-19 cases.

Olaf Scholz, the chancellor-in-waiting, and his center-left Social Democrats, are attempting to form a three-way coalition with the Greens and Free Democrats. Leaders from the parties have agreed to put new restrictions in place targeting unvaccinated individuals, which includes “mandating that they obtain a negative coronavirus test before traveling on buses or trains, as infection rates reach new highs.”

Angela Merkel, the outgoing chancellor, said it was a “dramatic” situation in her country and the fourth wave was hitting the country “with full force.”

The report said that many of the restrictions for the unvaccinated will occur in states where there are more than three individuals hospitalized per 100,000. Those unvaccinated at these states will not be able to enter restaurants, cultural, or sporting venues, the report said.

In response to expectations that there will be no freedom for the unvaxxed, on Sunday, in the state of North Rhine-Westphalia, two COVID test centers were set ablaze.

TREND FORECAST: These re-imposed COVID War measures will further drag down economic growth while escalating populist anti-vax, anti-establishment movements. Ignoring the facts of broad based citizen outrage against draconian measures being imposed upon them by politicians and bureaucrats, the media will continue to moronically label those fighting for freedom as right wing conspiracy theorists.

ITALY: Despite a vaccination rate of over 80 percent of its population and among the strictest Green Pass restrictions in the world, COVID-19 cases continue to surge in parts of the country.

About 6.7 million Italians over 12 are unvaccinated in a country of over 60 million, The New York Times reported. Italy has been leading the way in Europe when it comes to COVID-19 restrictions, including the introduction and enforcement of the Green Pass in order to go into restaurants, cinemas, theaters, sports venues and gyms, long-distance train, bus or ferry travel.... or to go to work.

AUSTRIA: With 66 percent of its population of 8.9 million people virus jabbed, and registering one of the lowest vaccination rates in western Europe, there is strong resistance among Austrian citizens to fight lockdown rules and new mandates that force them to get the jab... or lose their “freedom.”

Demonstrators took to the streets of Vienna on Saturday to voice outrage over the government’s draconian restrictions. Holding up banners that read, “Freedom,” and shouting “Resistance!”...  some 35,000 people gathered in front of Vienna’s Heroes’ Square to protest that vaccines will become mandatory next year.

He called the measures “totalitarian” and said the government “believes it should think and decide for us.”

On Friday, Alexander Schallenberg, the chancellor, announced that the country would be locked down and enforce a vaccine mandate for its citizens. The country is the first to take such drastic measures.

“Increasing the vaccination rate—and I think we’re all in agreement on this—is our only way to break out of this vicious cycle of viral waves and lockdown discussions for good,” he said, according to The Associated Press. “We don’t want a fifth wave, we don’t want a sixth and seventh wave.”

The Austrian lockdown that began Monday will stretch for 10 days until it is reevaluated. The AP reported that hospitals in the country are not “under the same pressure they were earlier in the pandemic.”

DENMARK: Chanting "Freedom for Denmark," several thousand people demonstrated outside the Danish parliament in Copenhagen to protest the government’s plans for the reintroduction of the national health pass.

SWITZERLAND: Continuing their weekly protests, on Saturday, tens of thousands of people took part in rallies across the country in protest of government COVID mandates. As we have reported, in the nation of Direct Democracy, on November 28, there will be a nationwide vote on whether to continue or end the COVID Law mandates.

NORTHERN IRELAND: In protest of the government’s no-vax, no admission to nightclubs, bars and restaurants starting 13 December, a few thousand people opposed to the mandates protested outside Belfast’s city hall on Saturday.

CROATIA: Reuters reported that on Saturday, thousands gathered in the capital Zagreb, carrying Croatian flags, nationalist and religious symbols, along with banners against vaccination and what they describe as restrictions of people's freedoms.

NORTH MACEDONIA: In protests of mandatory vaccination requirements, thousands took the streets in Skopje on Saturday.

AUSTRALIA: “FREEDOM!” That was the demand chanted by tens of thousands of people who have marched in rallies in Melbourne, Sydney, Brisbane, Perth and Adelaide, in protest of the government’s COVID War lockdown/must get vaccinated mandates and pending pandemic legislation that will rob them of more of their Constitutional Rights.

GUADELOUPE: In response to massive protests and a week of unrest against restrictive vaccine mandates, France deployed security forces to its occupied Caribbean island of Guadeloupe.