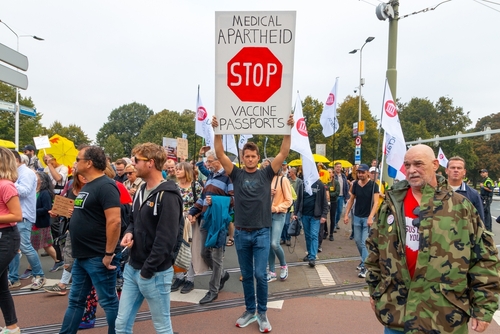 In last week's Trends Journal, we reported on the plan to gradually "normalize" life in Australia's New South Wales (largest city, Sydney) as projected full-vaccination goals are met, except that the unvaccinated would be exempt from having their freedoms restored; see "NSW: NO VAX, NO FREEDOM!" (28 Sep 2021).

Now NSW's Premier Gladys “Beenjerkingoff” Berejiklian (who suddenly resigned last week; see “AS FORECAST: NSW'S PREMIER A PROVEN CLOWN FRAUD” in this issue) told people who have not taken the COVID Jab that they will continue to be treated as second-class citizens, even after the 80 percent fully-vaccinated mark (forecast for the end of October) is attained. And when almost all remaining restrictions and stay-at-home orders are lifted on 1 December, a series of restrictions will remain for the un-vaxxed.

"A lot of businesses have said they will not accept anyone who is unvaccinated," Berejiklian announced, adding, "Life for the unvaccinated will be very difficult indefinitely," and that unvaccinated persons should expect to be barred from entering shops, hairdressers and entertainment venues even when such businesses are reopened to those who dutifully accepted the jabs.

TREND FORECAST: As detailed by the former Premier, "Life for the unvaccinated will be very difficult indefinitely."

Moreover, the general population accepts and obeys what their politicians and “authorities” tell them.

However, an “irate tireless minority, keen on setting brushfires in the minds of men,” will be opposing these dictates. New anti-establishment political movements which we have forecast, will greatly accelerate when equity markets crash and the Greatest Depression wreaks havoc across the globe.

TRENDPOST: Australia thus continues to be a country in which COVID-19 policies have had far greater negative impact (harsh lockdowns and harsher enforcement) on the general population than the virus itself; see "AUSTRALIA: DRONES & IGNORANCE" (25 Aug 2020). The latest figures (as of 1 October 2021) show that, in a country of just under 26 million, there have been just 1,309 deaths since the COVID War was launched in February 2020... which, of the total population, equals 0.00509 percent dead from the virus . Over the course of 18 months virus deaths equal the grand total of 0.0003 percent per month.