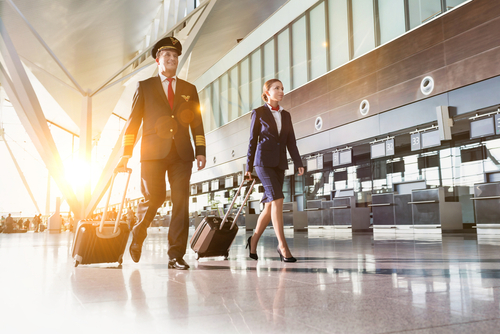 In August, United Airlines became one of the first large U.S. companies, and the first major airline, to announce that it was requiring all U.S. employees to be vaccinated against COVID-19, on pain of termination.

The policy is set to go into effect this week, but United claims that most of its employees already welcome or have at least accepted the mandate, and that 97 percent of its workforce has been vaccinated, excepting those who have sought exemptions.

Earlier this month, the Biden administration announced that all companies with 100 or more employees would have to require vaccination or have the employees submit to weekly testing. United's policy hasn't offered testing as an alternative.

Now comes word, on 23 September in The Wall Street Journal, that a group of six United employees (two pilots, a flight attendant, an aircraft technician, a customer service representative and a station operations representative) are bringing a lawsuit against the airline, claiming that it discriminates by failing to make or offer adequate accommodations for those seeking medical or religious exemptions. The suit claims the airline makes it difficult for employees to secure such exemptions, and that it fires them when they do.

This shows the difficulties that companies face in complying with government mandates and trying to do what's right for their employees. United's chief executive officer believes that requiring all employees to be vaccinated is critical to their safety. Clearly, not all employees, at United or elsewhere, would necessarily agree; see "MAJORITY OF AMERICANS WOULD QUIT THEIR JOBS THAN TAKE THE JAB. WILL THEY BACK DOWN?" (14 Sep 2021).

The six employees bringing the suit say they hope to represent a class of over 2,000 United employees worldwide who have sought exemptions.

TREND FORECAST: You know the facts, we have been reporting on them since the COVID War broke out and it is now part of the daily headlines. Across the business spectrum—from health care workers to truck drivers, from retail shops to drug stores—there is a dire shortage of workers.

Now, with the “No Jab, No Job” mandates being imposed by governments and imposed by businesses, the job shortage will greatly worsen and the socioeconomic implications will prove physically and economically deadly.

Indeed, with many hospitals and nursing homes already short staffed, the crisis will greatly worsen as people are fired for refusing the COVID Jab.

Yesterday in New York, for example, hospitals across the state fired and suspended thousands of healthcare workers for what they called “defying” a state order to get the COVID Jab. Short staffed, a number of hospitals cut services and postponed elective surgeries.

Besides putting the health of those that need surgery in jeopardy, Reuters reported that as a result of the staff shortages and the cutbacks in elective surgeries, Erie County Medical Center in Buffalo, which brings in about $1 million per week from elective surgeries will be losing money: "Financially, it's a big deal,” the hospital spokesman told Reuters.

Again, as the COVID War continues, and more people are being forced to lose their Rights if they are not jabbed, we forecast strong anti-vax, anti-establishment, pro-freedom movements will rapidly escalate across the globe.

TREND FORECAST: Yesterday, a federal appeals panel reversed a court decision made over the weekend that halted a New York City vax mandate requiring adults working in public schools to get the COVID shot. Thus, there will be a shortage of workers in public school sectors as well. And many of the displaced workers will also become supporters of anti-vax, anti-establishment Freedom movements.