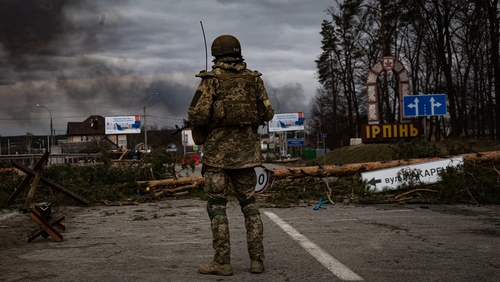 The Group of Seven, an organization of the world's seven largest "advanced" economies, announced Friday that it will provide Ukraine with nearly $20 billion in economic aid due to the economic hardships that the country faces after Russia's February invasion destroyed its economy.

“We agreed that Ukraine’s financial situation must have no influence on Ukraine’s ability to defend itself successfully,” Christian Lindner, the German finance minister, said at a press conference, according to Al-Jazeera. “We need to do our utmost to end this war.”

Earlier, U.S. Treasury Secretary Janet Yellen painted a bleak picture of Ukraine's finances and said despite the billions Kyiv already received from the West, its financing needs are “significant.”

"What’s clear is that the bilateral and multilateral support announced so far will not be sufficient to address Ukraine's needs, even in the short term,” she said prior to the announcement of the new funding. The needed financing would go toward paying soldiers and fulfilling pensions in the country, according to the Financial Times.

Kyiv estimated that it needed more than $15 billion over the next three months to fund itself due to the economic downturn after the start of the war while the International Monetary Fund estimates Ukraine needs about $5 billion each month to maintain basic government services.

Ukraine has benefited from an unprecedented amount of financial support since the 24 February invasion. The U.S. Senate approved last week nearly $40 billion in new aid for Ukraine that will provide military, economic, and humanitarian assistance.

"We Americans—all of us, Democrat and Republican—cannot afford to stick our heads in the sand while [Russian President] Vladimir Putin continues his vicious belligerence against the Ukrainian people,” Sen. Chuck Schumer, the Democratic minority leader, said.

Sen. Josh Hawley, R-Mo., was one of 11 Republicans to vote against the bill. He took to Twitter to point out that the $40 billion price tag is more than three times what European countries have sent to Kyiv.

It is worth noting that the U.S. has already approved $13.6 billion in emergency spending for Ukraine. (See “WEAPONS POURING INTO UKRAINE, NO TALK OF PEACE, JUST MORE AMMUNITION.”)

Yellen urged European countries to increase their financial support of Ukraine because the joint effort is “critical to help ensure Ukraine’s democracy prevails over Putin's aggression.”

TREND FORECAST: The G7 is comprised of the U.S., U.K., Italy, Japan, Canada, France, and Germany. Each of these members have been hit hard by surging inflation that has worsened since the start of the war on 24 February and are fearful of heading into recession. Therefore, the longer the war drags on, the less weapons and money these countries will be willing, or able, to send to Ukraine.

In addition, there will be push back from political factions who both oppose EU involvement in the Ukraine War both militarily and financially.

TRENDPOST: The U.S. and other Western countries seem like they gave Ukraine a blank check to continue this war against Russia. As we have noted, top U.S. senators have already said there may need to be several rounds of these $40 billion injections to sustain the country.

Yellen, who was in Koenigswinter, Germany, for the G7 meeting, looked past the war, and said Ukraine will “need massive support and private investment for reconstruction and recovery, akin to the task of rebuilding in Europe after 1945.”

"I think it's very natural that given the enormous destruction in Ukraine, and huge rebuilding costs that they will face, that we will look to Russia to help pay at least a portion of the price that will be involved," she said, according to Reuters.

President Joe Biden wants Russia to suffer as long as it continues its mission in Ukraine and he believes that can be achieved if he somehow manages to keep Western countries united, which is not an easy task since each country has its own needs.

Hungary has clashed with fellow EU members about Russian gas. The FT reported that Italy increased its oil imports from Russia by four times since the start of the war.

Yellen couldn't resist taking a shot at China during the meeting and blamed Beijing for maintaining economic policies that have “disadvantaged" Western countries.

“China is more likely to respond favorably if it cannot play one of us off against another,” she said. (See “TOP TRENDS 2021: THE RISE OF CHINA.”)

“China is building a consequential market share in certain technology products and seeks a dominant position in the manufacture and use of semiconductors,” Yellen said. “And China has employed a variety of unfair trade practices in its efforts to achieve this position.”