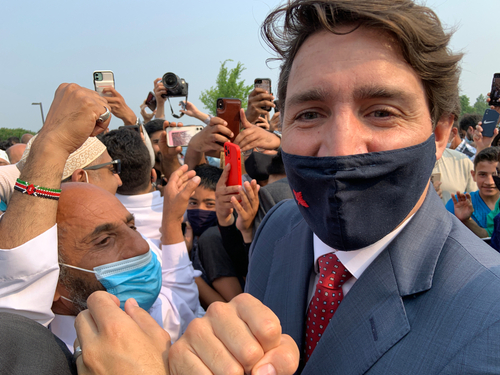 Ottawa announced Thursday that 3,400 troops are prepared to deploy to Europe.

Besides the troops that are on standby, up to 460 troops already in Europe will head to Latvia, where there are 540 Canadian troops.

Prime Minister Justin Trudeau—who snuffed out democracy in his own country after imposing the Emergencies Act to end the trucker’s Freedom Convoy, lock them up and freeze bank accounts of those supporting them—said, “Canada and our allies will defend democracy.”

“We are taking these actions today to stand against authoritarianism. The people of Ukraine, like all people, must be free to determine their own future.”

TRENDPOST: The unfortunate reality is that the democratically elected president of Ukraine was overthrown in a U.S. launched coup in 2014, that we have detailed in great detail in last week’s Trends Journal and previous ones as it happened. (See “VICTORIA ‘FUCK THE EU’ NULAND WHO SPREARHEADED OVERTHROW OF DEMOCRATICALLY ELECTED PRESIDENT OF UKRAINE IN 2014, STILL IN POWER.”)

TREND FORECAST: World War III has begun. But rather than defuse tensions and attempt to work for a peace agreement, the war hawks are screaming to escalate the fight.

As Gerald Celente noted, “When all else fails, they take you to war.”

Ukraine President Volodymyr Zelensky, one of the country’s most popular comedians who played the role as Ukraine president in the TV show, “Servant of the People,” before he got elected in 2019, said in a speech on Thursday that Kyiv has been essentially left to fend for itself against the much stronger and capable Russian military.

He realized that the cavalry was not coming and Kyiv was “left alone in defense of our state.”

“Who is ready to fight with us? Honestly, I do not see such,” he said.

“Today, I asked the 27 leaders of Europe whether Ukraine will be in NATO. I asked directly. Everyone is afraid. They do not answer,” he said.

In fact, the cavalry did come to his rescue in terms of weapons, money and munitions.

Yes, “He”... not We the People authorized taxpayer money to go to Ukraine.

"Today, as Ukraine fights with courage and pride against Russia's brutal and unprovoked assault, I have authorized, pursuant to a delegation by the president, an unprecedented third Presidential Drawdown of up to $350 million for immediate support to Ukraine's defense.”

This latest money pumping now brings the total security assistance the "United States has committed to Ukraine over the past year to more than $1 billion," according to the State Department.

TRENDPOST: The Trends Journal has reported extensively on the buildup of tensions in eastern Ukraine and the worsening relationship between the White House and the Kremlin. (See: “KREMLIN BLAMES UKRAINE FOR STOKING TENSIONS AT BORDER,” “U.S. VOWS UKRAINE SUPPORT” and “BLINKEN BELLOWS: U.S. COMMITMENT TO UKRAINE’S SOVEREIGNTY IS ‘IRONCLAD”).