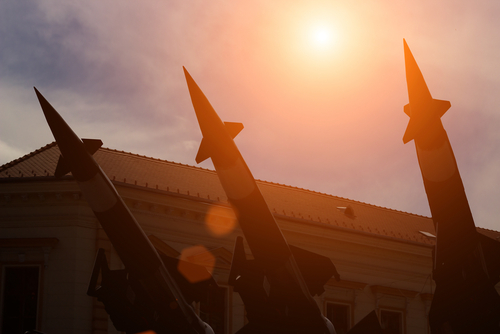 Rafael Grossi, the director of the IAEA, said the agency has no “information that there is any deviation of material, any undeclared material or activities leading to the development of nuclear weapons” in Ukraine.

His comments run counter to claims by Sergey Lavrov, the Russian foreign minister, that Kyiv has been playing “dangerous” games in its quest to acquire these weapons. The Wall Street Journal reported that Lavrov did not provide evidence.

Those who believe a no-fly zone should be established over Ukraine have seized on the 1994 Budapest Memorandum that vowed security assurances as long as Ukraine transferred its nuclear arsenal obtained after the fall of the Soviet Union.

The U.S. and U.K. vowed to come to Kyiv’s aid, but denied Kyiv’s request for a “legally binding guarantee.”

“I’m going to point out the elephant in the room,” Bill Browder, the CEO of Hermitage Capital, tweeted. “The U.K. and U.S. committed in 1994 to protect the territorial integrity of Ukraine in exchange for Ukraine giving up its nuclear weapons. Now that is being threatened, we have a moral imperative to at least set up a no-fly zone.”

Some responses pointed out that security assurances are different from vowing to protect territorial integrity. Ukraine once held the world’s third-largest amount of nuclear weapons—about 1,900 strategic warhead, 176 intercontinental ballistic missiles, and 44 strategic bombers, according to armscontrol.org.

TRENDPOST: RT reported yesterday that the Russian military accused the Ukrainian government of destroying pathogens at laboratories linked to the U.S. Department of Defense.

“If these collections fall into the hands of the Russian experts, they will highly likely prove Ukraine and the U.S. have been in violation of the Biological Weapons Convention,” Russian Lieutenant General Igor Kirillov said, adding that “this is the only reason that can explain the hasty destruction” of those materials.

TREND FORECAST: This past Sunday, there was debate across America’s mainstream media whether or not to impose a no-fly zone over Ukraine.

While Sens. Joni Ernst and Marco Rubio agreed that imposing a no-fly zone over Ukraine would increase the risk of a direct military confrontation between the U.S. and Russia.

On the other side, ramping up the war talk and dismissing the threats of war should Moscow militarily retaliate, Sen. Joe Manchin said, “I would take nothing off the table, but I would be very clear that we are going to support the Ukrainian people, the Ukrainian president, his government every way humanly possible.”

Considering the buildup of weaponry moving into Ukraine and the rhetoric of imposing no-fly zones and NATO’s obligations to defend Ukraine—which equals fighting Russia—the world is on the edge of WWIII.

Yesterday, the Kremlin announced it will end military operations “in a moment” if Kyiv complies with a list of conditions. They include Ukraine’s ceasing of military actions and an alteration to the current constitution that will enshrine neutrality, recognize Donetsk and Lugansk as independent states (which is part of the 2015 Minsk Agreement), and acknowledge that Crimea is a territory of Russia.

These conditions were immediately denounced and rejected by its “allies.” Thus, the war will continue and more will die.