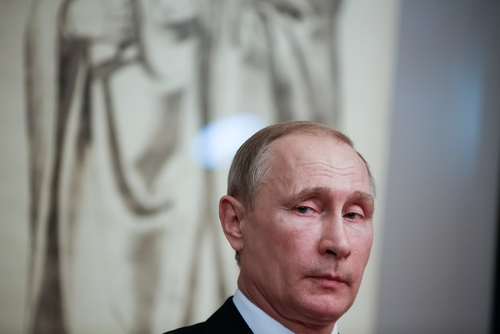 Putin accused Ukraine of taking a “path of violence” in the Donbass region and ordered Russian troops to enter eastern Ukraine to “maintain peace.” Video footage emerged Monday night that appeared to show Russian tanks and troops entering the region. In 2014, these two republics declared their independence and have been controlled by Russian separatists.

“As I said last week, defending freedom will have costs for us as well and here at home, said Putin. He had also noted that “I believe it is necessary to take a long overdue decision to immediately recognize the independence and sovereignty” of the two states.

Putin accused Ukraine of taking a “path of violence” in the Donbass region and said he sees no other solution.

“Therefore, I believe it is necessary to take a long overdue decision to immediately recognize the independence and sovereignty” of the two states.

The Guardian reported that the Russian president showed a “visceral anger” toward Ukraine that he called a “brother nation.” The paper pointed out that Putin signed a presidential order and, in all likelihood, will send troops to “defend” the regions.

The move, he said, was a direct result of the failure of the 2014 Minsk agreements, designed to put an end to fighting. “They are not interested in peaceful solutions—they want to start Blitzkrieg,” he said. “Every day they are amassing troops in the Donbass.”

Jen Psaki, the White House press secretary, said the U.S. will cease all trade or investment with these two states and will “soon announce additional measures related to today’s blatant violation of Russia’s international commitments.”

Ursula von der Leyen, the president of the European commission, called Putin’s move a “blatant violation of international law, the territorial integrity of Ukraine and the Minsk agreements.”

“The EU and its partners will react with unity, firmness and determination in solidarity with Ukraine,” she said.

Tensions in Ukraine’s Donbass region—where there have been clashes between Ukrainian forces and Russian separatists since 2014—have resulted last week in two Russian leaders urging civilians to flee over the threat of a full-scale invasion.

There has been a significant increase in violence, according to reports. The main instigator of these clashes depends on who you ask. Western media companies, which have done their best to present Russian President Vladimir Putin as the big bad wolf and the separatists as his wolves, blame the Russians for picking a fight in order to justify an invasion.

The Washington Post reported that separatists have been accused of firing on neighborhoods like Stanytsia Luhanska in order to provoke Ukrainian forces to respond. The paper also pointed out that the separatists claim the exact opposite. They say Ukrainians have been opening fire on their territories and they are simply responding.

The Ukrainian Armed Forces said in a statement that the mortar fire has increased “tenfold” in the region since Thursday and accused separatists of violating the ceasefire 70 times, the paper reported. Two soldiers were killed and five injured, the paper said.

Separatists were also blamed for hitting a kindergarten—injuring three teachers but no students, according to The New York Times. Major news outlets presented the attack as an example of Russia's aggression.

CNN wrote that the strike on the school is a reminder “of the very real stakes for people living near the Line of Contact that separates Ukrainian government forces from Russian-backed separatists.” (See “KREMLIN BLAMES UKRAINE FOR STOKING TENSIONS AT BORDER.”)

Separatists on Monday blamed Ukraine’s government for killing two of their civilians in shelling late Sunday, which was widely ignored by Western media.

“Kyiv can start a full-scale assault on Donbass at any moment, the situation is critical,” Denis Pushilin, the head of the unrecognized Donetsk People’s Republic, told RT.

The report said he made the comment shortly after a car bomb exploded near the regional police chief, who was not injured. He told the Russian outlet that buildings in Donetsk have guards in place to prevent a terror strike by Ukraine forces.

At the heart of the conflict in Donbass is the disregard of the Minsk II agreement that was signed on 12 February 2015.

“The Minsk Agreements stipulate establishing a ceasefire and separating the opposing military forces, providing a special constitutional regime for the Donbass (with requisite amending of Ukraine’s constitution), and the holding of elections in the non-controlled territories, with Kyiv thereafter to have control over the Russia-Ukraine border in the Donbas.”

Critics of the agreement call the document vague and say it heavily favors the Russians. Kyiv signed the deal after suffering military losses to Russia in 2014. Some analysts say Petro Poroshenko, the Ukrainian president at the time, signed the deal because his military was facing almost certain defeat.

Kyiv and Moscow now have wildly different interpretations of the agreements. Kyiv sees the documents as an avenue to restore territorial integrity and Moscow sees them as increasing the possibility that it could exercise a veto over Ukraine’s future, the Financial Times reported.

Despite its imperfections, European leaders hope that the agreements could lead the path to a diplomatic score in the most recent standoff. The Financial Times reported that Olaf Scholz, the German chancellor, met with Putin who said the agreements should be the “basis” for a resolution to the current tensions.

The report pointed out that French President Emmanuel Macron has called the Minsk deals the only way to build peace. The U.S. also agreed with the assessment. (See our related articles, “PUTIN PUTS PRESSURE ON UKRAINE” and “BIDEN PLEDGES ‘UNWAVERING SUPPORT’ FOR UKRAINE.”)

The FT pointed out Kyiv wants Russian forces to leave the Donbass region prior to local elections. Kyiv also wants to control its own borders before votes are cast. Russia wants the vote to occur prior to Kyiv taking control of its own border because Moscow believes that will eliminate any chance of Kyiv joining NATO.

“You may like it, you may not like it—but deal with it my gorgeous,” Putin said earlier this month, referencing his Ukrainian counterpart Volodymyr Zelensky.

TREND FORECAST: The U.S. will not go to war with Russia over Ukraine. The military in Ukraine is no match against the Russians, and its only hope for security in the future is to become a member of NATO, which Blinken did not indicate is any closer today than it was before Russians amassed at the border.

Jens Stoltenberg, NATO’s secretary-general, has been vague on what kind of response the alliance would have in the event of a Russian invasion and has on one occasion clarified that Ukraine is a NATO partner and not a member, which translates to mean: Kyiv’s on its own.

TREND FORECAST: Gerald Celente has noted, “When all else fails, they take you to war.”