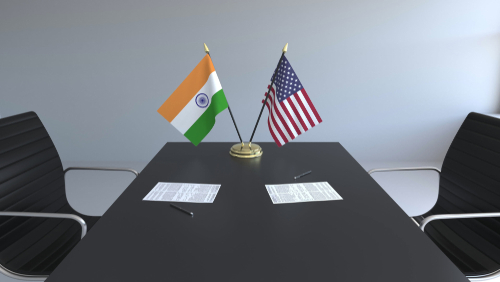 Tensions continue to increase between the U.S. and India with Washington warning New Delhi that there could be consequences in the relationship if it does not toe the anti-Russia, pro-sanction line.

The Wall Street Journal reported last week that there was a high-profile diplomatic meeting between U.S. and Indian officials. The U.S. official talked about consequences for countries that circumvent these sanctions. The Indian officials seemed taken aback by the comment and said "such words" should never be used in diplomacy.

In March, The Trends Journal published an article, "INDIA AND RUSSIA FORMING NEW TRADE TIES," that said the two countries are talking about raising their two-way commerce from its $8 billion value in the 2021 financial year to $30 billion before 2025.

India buys fertilizer, fuel, and gems from Russia and runs a trade deficit with its partner to the north; India’s chief export to Russia is pharmaceuticals.

The Indian government and private companies have purchased about 30 million barrels of Russian crude since the 24 February invasion. New Delhi’s position has been to secure its own county while calling for an end to the war.

The WSJ reported that oil from Russia makes up a "small fraction of Indian oil imports—about 2 percent in 2021 and New Delhi is not among the top 10 importers: "At roughly $150 billion a year, U.S.-India trade alone is more than 12 times as large as Russia-India trade," Sadanand Dhume, the WSJ reporter wrote.

External Affairs Minister S. Jaishankar told reporters that India would set its own course on foreign policy, according to DW.com.

"We have to be confident about who we are. I think it is better to engage the world on the basis of who we are rather than try and please the world as a pale imitation of what they are," he said. "This idea that others define us, somehow we need to get the approval of other quarters, I think that is an era we need to put behind us."

Russia, knowing the importance of its relationship with India, has been working on securing the relationship. Sergey Lavrov, Russia's top diplomat, said that Moscow would be willing to sell India anything it wanted.

TRENDPOST: The Trends Journal has reported on the pressure campaign that countries have faced if they refused to walk in lockstep with U.S. sanctions. (See “INDIA, RUSSIA FORMING NEW TRADE TIES,” “RUSSIA DEALS WITH INDIA TO OFFSET WEST’S SANCTIONS,” and “CHINA STANDS WITH RUSSIA. TELLS E.U. AND U.S. FU!”)

Jaishankar, the external affairs minister, seemed keen on stepping up to the West's pressure and called out the West's recent disasters in countries like Afghanistan.

"The West should remember what happened in Afghanistan less than a year ago, where an entire civil society was thrown under the bus by the world," Jaishankar said, according to DW.com.

"When the rules-based order was under challenge in Asia, the advice we got from Europe was: Do more trade. At least we're not giving you that advice," he added.

TRENDPOST: “Remember what happened in Afghanistan”?

With the propaganda war heated up against Russia, long forgotten is the 20 year war launched by President George W. Bush that cost trillions, killed hundreds of thousands, destroyed the country and left it in economic ruins since the U.S.’s humiliating exit... leaving behind some $6 billion in armaments for its Taliban enemy.