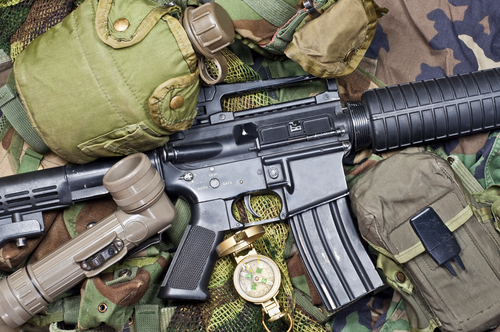 President Joe Biden continues to take the lead in propping up the Ukrainian military while trying to inflict as much economic harm against Russia outside of direct combat.

Biden had another phone call with Ukrainian President Volodymyr Zelensky last week and promised another $500 million in economic assistance.

Biden told reporters after the call that the U.S. "intends to provide the Ukrainian government with $500 million in direct budgetary aid."

The Pentagon also announced Friday that it will donate $300 million to fulfill a virtual wish list for Ukraine, which will include laser-guided rocket systems, new drones, ammunition, machine guns, and other weaponry.

NBC News reported that the latest investment will increase the U.S. “security commitment” to Ukraine to more than $2.3 billion since President Joe Biden entered the White House.

Congress approved $13.6 billion in emergency spending earlier this month related to Ukraine’s fight against Russia’s invasion. The U.S. Agency for International Development said Ukraine benefited from six percent of total U.S. foreign assistance in 2020, according to The New York Times.

The Trends Journal has reported extensively on the West’s effort to arm Ukrainians against their much-larger rival. Many see these contributions as an effort by the West to fight a proxy war with Russia in Ukraine. (See “WARMONGERS ON PARADE: WEST SENDS MORE WEAPONS TO UKRAINE TO KEEP THE KILLINGS GOING,”)

The New York Times, citing unnamed sources, reported on Friday that the U.S. will begin to transfer Soviet-made tanks to Ukraine in the Donbas region. The paper pointed out that it is the first time Washington will assist in the transfer of tanks during the Ukrainian war effort.

As Zelensky’s popularity has grown in Western media, so has his bravado. He has become more assertive in his demands for better weapons to take on the much larger Russian force that has been dominating its air campaign. (See GERALD CELENTE’S INTERVIEW WITH SCOTT RITTER.)

Zelensky said Western countries should be willing to provide all “the weapons we need" to "prevent the deaths of Ukrainians from Russian strikes, from Russian occupation." He told Fox News in a recent interview that he had confidence in the West.

"I believe that the United States, the people of the United States want that but if this process gets longer, continues to be delayed, if we can see that the process of transferring those weapons is getting slower, then people begin to ask the question, 'Is it really true?'" Zelensky said. "Maybe there is some game behind it. I don't want to believe that some partners of ours are playing games."

The White House told the Financial Times that it is “working around the clock to fulfill the main security assistance requests by Ukraine, the critical effects those weapons have had on the conflict, and continued efforts by the United State with allies and partners to identify additional capabilities to help the Ukrainian military defend its country.”

TRENDPOST: The White House has refused to acknowledge its own failed diplomacy that Ukrainians are now paying for. Russia told the U.S. and NATO clearly that it wants NATO to stop expanding and does not want Ukraine to join.

U.S. Secretary of State Antony Blinken said no deal on both fronts.

Moscow called those two issues its red line and decided to act. The Biden administration now finds itself having to tell Americans that they don’t need to worry about nuclear war.

Despite all of America’s tough talk, Gerald Celente has pointed out that the American military has not won a war since WWII and has been stacking up defeats, including the recent retreat from Afghanistan. (See “DUH! PENTAGON SURPRISED BY CHINA’S TEST OF HYPERSONIC MISSILE,” “PENTAGON: TARGET CHINA” and “U.S. ‘ALREADY LOST’ AI WAR WITH CHINA, PENTAGON’S FORMER SOFTWARE CHIEF SAYS.”)

Yet, as they have since the end of World War II, Washington and their Presstitutes will continue their fear and hysteria Cold War rhetoric to frighten its masses while enriching the military manufacturing mob.