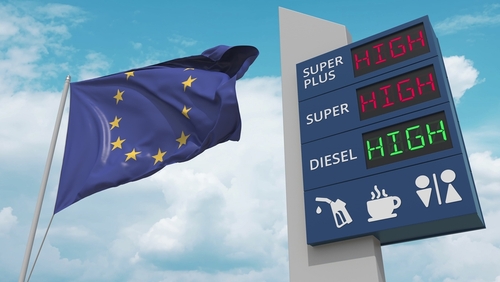 In March, when U.S. President Joe Biden started to notice that sanctions against Russia were not panning out, he said they were never intended to prevent last month's invasion but were instead intended to unite Europe and show its resolve.

Biden said sanctions “never deter,” but they can be effective when kept in place for a long period. He said the most important thing is that the West stays “unified” and for the world to continue to focus on what a “brute” Putin is.

It’s a good thing these sanctions are merely symbolic, because—not only did they not prevent the war—they are not hurting the Russian economy yet, in particular its oil output.

The International Energy Agency raised its forecast for Russian crude production and said Western sanctions have had a “limited impact” on the country’s output.

The Financial Times reported that Russian shipments to the EU and U.S. have fallen by 2.2 million barrels a day.

But the barrels found new customers in Turkey, China, and India.

The IEA said Moscow is expected to trim its production when the EU embargo takes full effect in February 2023. Bloomberg reported that Russian shipments to Asia have stabilized, which raises the question if the region can absorb more of Moscow’s oil when the European embargo takes hold.

TREND FORECAST: The day the Ukraine War began, U.S. President Joe Biden said, "Putin is the aggressor. Putin chose this war and now he and his country will bear the consequences."

“We’re going to impair their ability to compete in a high-tech 21st century economy,” he said.

“We’ve already seen the impact of our actions on Russia’s currency, the Ruble, which early today hit its weakest level ever—ever in history.  And the Russian stock market plunged today.  The Russian government’s borrowing rate spiked by over 15 percent,” he said. “In today’s actions, we have now sanctioned Russian banks that together hold around $1 trillion in assets.”

“Some of the most powerful impacts of our actions will come over time as we squeeze Russia’s access to finance and technology for strategic sectors of its economy and degrade its industrial capacity for years to come,” he said.

“Putin chose this war, and now he and his country will bear the consequences,” Biden said. “This is going to impose severe cost on the Russian economy, both immediately and over time.”

“As a result of these unprecedented sanctions, the ruble almost is immediately reduced to rubble,” President Joe Biden asserted.

But since that time, the ruble has hit a seven year high. And now, The Bank of Russia announced that within the next few years it plans to have a central bank digital currency (CBDC), planning an official digital ruble rollout in 2024.

As we had reported, the Biden administration said on 28 February: “Our strategy to put it simply is to make sure that the Russian economy goes backward. As long as President Putin decides to go forward with his invasion of Ukraine.”

Russia will continue to use energy to try and break up the fragile Western coalition against its war effort. We’ve reported how Western leaders, who are willing to weaponize sanctions, are quick to criticize Moscow’s weaponization of energy flows.

Moscow has already stopped gas deliveries to some European countries, but has increased flows to Hungary. Gazprom could supply Hungary with an additional 2.6m cubic meters of gas per day than mentioned in the contract.

Hungary's Prime Minister Viktor Orban, much to the chagrin of other European countries, has not come out strongly in opposition to Russia’s war in Ukraine.

DW.com reported that a few weeks ago, he said the unthinkable: it was perhaps time for Western Europe to understand that the goal should not be to win a war against Russia but to finally achieve peace.

The Western support of Ukraine will fold if there is not enough gas in Europe by the winter, because some countries are more reliant on Russian energy than others. There will be infighting because countries sacrificing more will want compensation from others.

As a result of an ongoing heat wave and sanctions on Russian gas supplies, electricity prices in Europe hit new records last week.

According to the Financial Times, “German baseload power for delivery next year, the benchmark European price, was up more than 5 per cent yesterday at a record €455 per megawatt hour. This is five times higher than this time last year. The equivalent French contract was up 4 per cent, exceeding €600 per megawatt hour for the first time.”

TRENDPOST: In pushing for his oil sanctions against Russia, back in March, U.S. President Joe Biden said sanctions “never deter,” but they can be effective when kept in place for a long period of time. He said the most important thing is that the West stays “unified” and for the world to continue to focus on what a “brute” Putin is.

And, as the price of gas kept spiking higher, Biden declared that “There will be costs at home as we impose crippling sanctions in response to Putin's unprovoked war, but Americans can know this: the costs we are imposing on Putin and his cronies are far more devastating than the costs we are facing.”

Yet while gas prices have come down since then, inflation in the U.S. hit 8.5 percent in July and was up 8.9 percent in the 19 European countries that use the euro. And, severely punished by the sanctions and its acrimonious stance toward Russia, neighboring Estonia saw its inflation hit an annual rate of nearly 23 percent.

We have also detailed how the sanctions have hit rich and poor nations across the globe, while doing nothing to change Russia’s course in fighting the Ukraine War. Yet, the monumental sanction failures and high costs are never condemned by the politician or Presstitutes.

Then in June Biden said Americans have been willing to sacrifice after the Russian invasion and “chose to stand with the people of Ukraine.”

"So for all those Republicans in Congress criticizing me today for high gas prices in America, are you now saying we were wrong to support Ukraine? Are you saying we were wrong to stand up to Putin? Are you saying that we would rather have lower gas prices in America and Putin’s iron fist in Europe? I don’t believe that," he said.