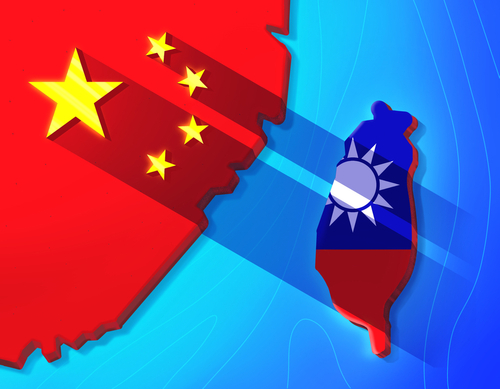 Russia’s invasion of Ukraine last month is a reminder for Taiwan and its allies that China could also stage its own attack and they should be ready to respond, a top U.S. military commander said.

“I don't think anyone five months ago would have predicted an invasion of the Ukraine,” John Aquilino, the head of Indo-Pacific Command, told the Financial Times last week.

Aquilino was visiting Australia and said one lesson from the Russian invasion is “this could really happen.”

He said another lesson is not to be complacent and to be prepared for an attack.

The Trends Journal has reported extensively on China’s recent aggression in the region and how Taiwan is wasting money by building up its military which is no match to the much larger Chinese force. (See “WILL CHINA SOON INVADE TAIWAN?”)

Beijing has long declared Taiwan as part of its territory under its "One China Principle.” The U.S. has historically pursued a policy toward the matter as "strategic ambiguity," which means it will aid Taiwan's defenses but will not promise to come to the island's defenses in the event of an attack.

Aquilino told the paper that Beijing has flown an increased number of sorties into Taiwan’s air defense identification zone. He said he sees an “increased pressure” being applied from Beijing.

TRENDPOST: It is worth pointing out that Russian President Vladimir Putin met with China’s Xi Jinping last month and the two announced a partnership that they both said had “no limits.” Russia also reaffirmed its support for Beijing’s “One China” principle, according to The New York Times.

Aquilino said Beijing has invested in its nuclear arsenal and hypersonic missile technology, however, the U.S.’s military budget is still greater than the world’s next nine largest combined, including Beijing’s which is at $230 billion.

Indeed, as we have noted in this Trends Journal, President Biden wants to add another $31 billion to America’s defense budget, bringing the total spending in one year to $813 billion. And, when the intelligence sector is added, military/industrial/intelligence is well over a trillion dollars per year.

TREND FORECAST: The Trends Journal has been reporting on the rise of China and its growing influence in the region and around the world.

In our 30 March article, “CHINA TO TAKE TAIWAN: A MATTER OF TIME,” we forecast that at some point, China, as it has with Hong Kong, would take complete control of Taiwan.

Taipei is aware it is no match against the People’s Republic of China, and that is why the Ukraine War hits home for the 23 million on the island. They also see that the U.S. will not come to their aid.

China spends 25 times the amount Taipei does on its military. China also has a hundred times as many ground-force troops as the island.

Taiwan benefits from not sharing a border with China and being cut off from mainland China by the Taiwan Strait, which is about 100 miles wide.

Taiwan, like Ukraine, would likely be able to put up a fight against its much larger adversary and has already announced that it will double its missile production capacity by building 34 new factories to develop Tien Kung missiles, Asia Times reported.

Taiwan can currently produce 207 of these missiles and hopes to increase that number to about 500.

Taiwan is also considering extending its four-month compulsory military service for those 18 and older in light of the invasion.

Defense Minister Chiu Kuo-cheng told The Associated Press that Taipei would release the results of its internal research on whether it will pursue the matter. Taiwan has about 215,000 members of its military, according to the AP, and most are volunteers.