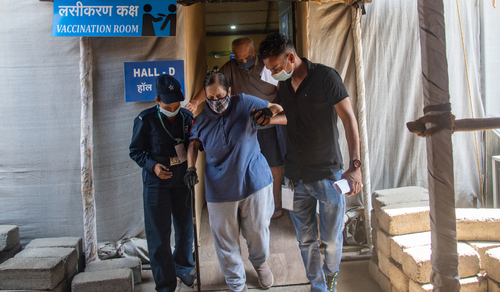 As we have reported since the COVID War broke out, if someone died from falling off a ladder and breaking their neck, if they tested COVID positive, they would be classified as having died from the virus.

We reported in our 14 April 2020 issue, in an article titled “THE NUMBERS DON’T ADD UP,” that some doctors and physician assistants in the U.S. claimed that they were under pressure to categorize COVID-19 as the cause of death, even when it was likely not to be the case.

Now, hospitals across the U.S. are beginning to make a distinction between COVID-19 patients who are hospitalized because of the virus and those who were diagnosed after their admission for some other ailment.

The U.S. has seen an explosion of COVID-19 cases in hospitals that are largely blamed on what health officials say is a highly transmissible Omicron variant. However, the percentage of hospitalized patients in need of I.C.U. care is significantly lower than during previous waves.

Overall, hospitalizations are decreasing in states where Omicron first emerged. The U.S. had a seven-day rolling average of 155,677 patients with the virus, which was higher than the previous peak of 139,279 in January 2021. (See “PLAY SCRAMBLE: DOES OMICRON= MORONIC?,” “VAXXED OR NOT, OMICRON’S GONNA GET YA!” and “DIRE (AND PUZZLING) PREDICTIONS FROM BIDEN AND FAUCI.”)

Health officials are only now discovering that many patients who are tallied as COVID-19 cases are not hospitalized with the virus as their primary concern.

The Financial Times reported that since COVID infections are so widespread—and since the Omicron variant seems to be a less-severe strain—many Americans have no idea that they even have the disease.

“We or seeing a lot of people coming to the hospital for other reasons who just happened to find they have COVID,” Jennifer Caputo-Seidler, a doctor at Tampa General Hospital in Florida, told the FT. “They may have a broken leg but are still testing positive.” These cases are considered to be “incidental.”

Hospitals in Massachusetts on Thursday, for the first time, distinguished patients who were “incidental” COVID-19 cases and those who were considered “primary” COVID patients.

There were 3,187 patients hospitalized in the state with the virus and 49 percent were incidental cases. The distinction was made by counting how many patients were given the steroid dexamethasone.

The FT reported that 42 percent of COVID-19 cases were incidental in New York and about two-thirds in Los Angeles.

Since the beginning of the outbreak, there has been speculation about just how many people who were dying from the virus compared to those who died with the virus.

TRENDPOST: As we reported in the 14 April, 2020 Trends Journal, Dr. Scott Jenson, a Minnesota state senator who is also a medical doctor, accused the CDC of directing doctors to list COVID-19 as a cause of death even for someone who was never tested for it, which he said is “ridiculous” and misleading.

“I know that I've talked with nursing staff… and was led to believe that there may have been a COVID-19 diagnosis included on the death certificate document without having had a COVID-19 confirmed laboratory test,” said Dr. Jenson.