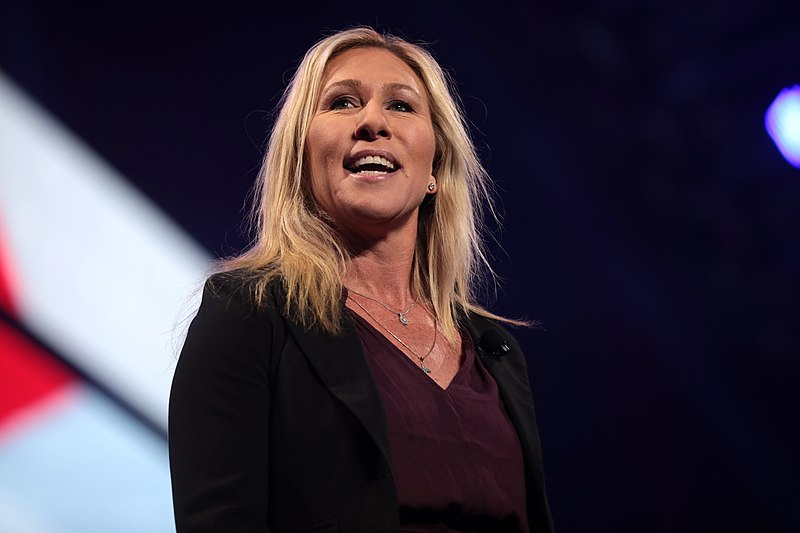 Rep. Marjorie Taylor Greene, the Republican from Georgia, came out against the U.S.’s involvement in the Ukraine War and called on Washington to pull out of the Alliance.

“The American people do not want war with Russia, but NATO and our own foolish leaders are dragging us into one,” she said in a tweet.

Greene said the U.S. is waging a proxy war with Russia that no country can win and can escalate into a nuclear confrontation.

There has been near-universal bipartisan support for sanctions against Russia coupled with military aid to Ukraine to fight off the Russian invasion.

But Greene, who is considered a firebrand in the party, has been more critical of Ukraine’s role before the war. She said in March that the West was agitating Russia by “poking the bear” with NATO expansion. She also did not buy the media's claim early on in the war that Moscow would lose. She broke from her party and said Russia was “very successful” in its invasion.

President Joe Biden has worked to present NATO as a united front for good against Russia. His support for Ukraine has no limit. On Friday, the U.S. said it will send Kyiv an additional $820 million in military aid. (See “WEAPONS POURING INTO UKRAINE, NO TALK OF PEACE, JUST MORE AMMUNITION,” “PLACE YOUR BETS: UKRAINE VOWS VICTORY DESPITE RUSSIA’S GAINS IN EAST” and “BIDEN KEEPS WAR DRUMS BEATING, ANNOUNCES ANOTHER $1B IN WEAPONS FOR UKRAINE.”)

The U.S. has given Ukraine some $57 billion since the war started on 24 February. This latest injection will go to additional ammunition for High Mobility Artillery Rocket Systems (HIMARS), two National Advanced Surface-to-Air Missile Systems (NASAMS), up to 150,000 rounds of 155mm artillery ammunition, and four additional counter-artillery radars.

Despite the support from Congress, war with Russia is not a popular position among Americans. A YouGov poll found that 40 percent say the U.S. should be less militarily engaged in conflicts around the world.

The Ukraine War is also not something that is on the mind of everyday Americans. The poll found that 38 percent think Washington should tackle the surging costs of living while just 8 percent said the U.S. should “ensure a defeat of Russia in Ukraine.”

Greene posted on Twitter: "The American people do not want war with Russia, but NATO and our own foolish leaders are dragging us into one. A war that no one will win. Escalation over Ukraine, a non-member nation, risking nuclear war is a power-play endangering the entire world. We should pull out of NATO."

Greene took to Twitter to post an interaction that she had with a Washington Post reporter in May. The reporter asked her about her voting record on Ukraine and how she has voted against measures to support the country. She was joined by only two Republicans in many of her votes and no Democrats.

"I feel very sorry for the Ukrainian people, but I was elected to represent my district in Georgia," Greene said. "Has it stopped Putin? Let me ask you, has Vladimir Putin stopped his war in Ukraine because of all these sanctions? No, not at all."

TREND FORECAST: The U.S. Democratic Party, which is totally behind sending billions of dollars of weapons of death to Ukraine and voted to increase the U.S. military budget, has become the new “right wing” of America’s political system, while people serving on the “right” have turned “left.”

Indeed, Ms. Greene is denounced for her statements and ridiculed by the media as a “Trump supporter,” while comedians and actors—once the core anti-war and anti-government control—are now members of the War Mongers Society.

On the grander political scheme of things, we forecast that there has never been a greater opportunity for a new pro-peace populist movement in the United States and Europe than now.

TRENDPOST: The Trends Journal has noted that the longer the war in Ukraine drags on the more people will die, the more infrastructure will be badly damaged, and the closer the world inches to fighting WWIII.

Ukraine's position—or that of the U.S. which Ukraine is told to take—has been that they will make no concessions and they will take back every inch of ground taken over by Russian forces. Any mention of concessions has been swiftly rebuffed by Kyiv.

Greene said the American people have enough problems in the U.S. to worry about Ukraine. She cited record-high inflation and the trouble along the southern border. She said the only people who want a war with Russia are the ones who can make money off of the war.

“NGOs, defense contracts of all kinds, grants, business deals, even humanitarian aid, political consultations, & more,” she posted on Twitter. “War is an industry. A deadly industry.”

She said those seeking war in Washington should fight it themselves.

“Send your kids and leave ours alone. Pay for it yourself,” she said.

Biden has said the U.S. will support Ukraine for “as long as it takes” for a Ukraine victory.

WSWS.org reported that the longer the war drags on, “the U.S. political establishment is seeking to impose the full burden of the crisis on the working class.”

The report said there will be layoffs, particularly in the technology, real estate, and auto sectors.

TRENDPOST: Back in 2014, in an article for the Trends Journal, Dr. Paul Craig Roberts wrote that there is “No Need for Nato.”

He noted that Instead of disbanding NATO when the Soviet Union collapsed in 1991, Washington dramatically expanded NATO.  In violation of the Reagan-Gorbachev agreements, the Bill Clinton and George W. Bush regimes added constituent parts of the former Soviet empire to NATO—Hungary, Czech Republic, Poland, Estonia, Latvia, Lithuania, Slovenia, Slovakia, Bulgaria and Romania.

France, taken out of NATO by General de Gaulle, rejoined in April 2009, 18 years after the collapse of the Soviet Union, along with Croatia and Albania. Roberts said the Obama regime was working to incorporate into NATO two former Soviet Republics—Ukraine and Georgia.