U.S. APPROVES ANOTHER $550 MILLION IN WEAPONS SHIPMENTS TO UKRAINE 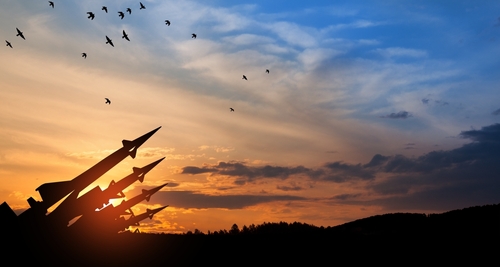 The White House announced on Monday that it will send another $550 million in weapons to Kyiv that will mostly include ammunition for the High Mobility Artillery Rocket Systems (HIMARS).

The latest round of weapons brings the U.S.’s total military support to more than $8 billion. The U.S. has also sent roughly $54 billion in aid to Ukraine to bail out its economy and help Kyiv pay salaries, pensions, and health care.

The latest package will also include 75,000 rounds of 155mm artillery.

Defense News reported that Ukraine is currently operating about 16 Lockheed Martin-made HIMARS that Ukrainians say have been effective in preventing Russian advances.

On Friday, a senior defense official said Ukrainian forces have been able to strike surface-to-air missile sites in Kherson thanks to the advanced rocket system.

Ukrainian President Volodymyr Zelensky has upped his tough talk in recent weeks and recently said that his military intends to “inflict the highest possible damage on the enemy.”

“Even the occupiers admit we will win. We hear it in their conversations all the time. In what they are telling their relatives when they call them,” he said.

The Trends Journal has long reported on the refusal of Kyiv to negotiate to end the battle by making concessions. (See “RUSSIA WINNING WAR, U.S./UKRAINE REFUSES TO NEGOTIATE FOR PEACE,” “WEAPONS POURING INTO UKRAINE, NO TALK OF PEACE, JUST MORE AMMUNITION,” “BIDEN SAYS PUTIN MUST PAY PRICE OVER INVASION IN UKRAINE” and “ZELENSKY REJECTS PEACE PROPOSAL, SAYS UKRAINE WILL BEAT RUSSIA.”)

TRENDPOST: OccupyPeace.com held a rally last month in Kingston, N.Y., that featured some of the top names in the pro-peace movement including Gerald Celente and Judge Andrew Napolitano, and the event was not picked up by one media outlet—not even the local paper called The Daily Freeman.

In America, Peace is both a dirty word, and a banned word.

The Presstitutes that are providing the public with the government-approved propaganda are too dumb to realize the consequences of their ignorance. Celente has said the U.S. is not in a proxy war with Russia; he said WWIII has already begun.

The Biden administration consists of nothing more than recycled failures from the Obama administration that are in The Club, and we’re paying for it.

TREND FORECAST: We maintain our forecast that Ukraine will not gain back its territory.

Ukraine would have been forced to negotiate with Russia months ago if not for the multi-billion dollar weapon flows from the West and billions in funding to prop up the economically broke and busted Kyiv government.