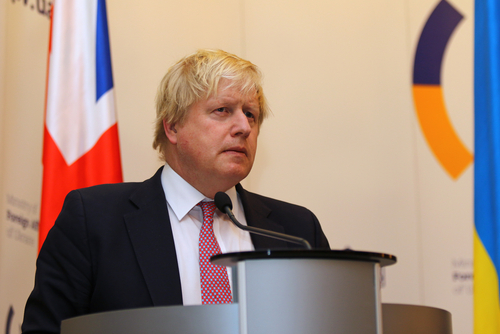 Johnson recalled WWII and mentioned how the British parliament also continued to meet during the darkest days of WWII.

“And the British people showed such unity and resolve that we remember our time of greatest peril as our finest hour,” he said.

The Wall Street Journal reported that Johnson has been one of the West's top supporters of Ukraine since the conflict began and “positioned himself” as Ukrainian President Volodymyr Zelensky’s “man in the West.” It has been Johnson’s vocal support of Kyiv that has motivated other countries in Europe to take a more assertive stance in the conflict.

The Journal pointed out that the U.K. gave Kyiv about $2.5 billion in aid and donated 6,000 anti tank missiles. Last week, London also announced a new, $300 million shipment of extra weaponry.

A spokesperson for Johnson's office told Reuters that Zelensky and Johnson discussed the possible supply of longer-range weaponry to Ukraine's armed forces.

"The leaders discussed developments on the battlefield and the Ukrainian armed forces' requirements, including the provision of longer-range weaponry to prevent the bombardment of civilians," the spokesperson said.

Last month, Zelensky praised Johnson's support, saying, "The leadership of the United Kingdom in providing our country with the necessary assistance, especially in terms of defense, as well as the leadership in sanctions policy will remain forever in history. Ukraine will always be grateful to Boris and Britain for this.”

Dmitry Kiselyov, a Kremlin-allied TV presenter, said during his program on Russian state TV last week that the U.K. is a “Sinkable Island” and showed how a nuclear strike could wipe out Ireland and Britain.

“Why threaten horizonless Russia with nuclear weapons when you sit on a small island?” he asked, according to The Washington Post. “Just one launch, Boris,” he said, “and England is gone. Once and for all. Why play with us?”

John Everard, a former U.K. ambassador to Belarus, told a news outlet that it is unlikely that one warhead would wipe out Ireland and Britain.

“I would urge everybody just to keep calm. By all means, if you feel strongly about it, make your things clear to the Russians. But can we please remember this is just a television mock-up,” Everard said to RTE. “The Russians do not have” such a weapon.

The Post also pointed out that Kiselyov showed a simulation of what would happen if Russia fired its little-known underwater Poseidon drone, that he said carried a warhead with a capacity up to 100 megatons.

“The explosion of this thermonuclear torpedo off the coast of Britain will raise a giant wave up to 500 meters high,” Kiselyov said, according to the paper. “Such a water squall also carries extreme doses of radiation. Passing over the British Isles, it will turn what may be left of them into a radioactive desert.”

TREND FORECAST:  Our Trends Journal poll showed that some 76 percent of the 2056 respondents said Russia would win the Ukraine War.

However, despite our sending the results to the mainstream media newspapers and networks, they all refused to report our findings. Instead, they continue to blast Boris Johnson’s bullshit who—along with Justin “Daddy’s Boy” Trudeau of Canada, Germany’s Chancellor Olaf Scholz and a long list of U.S. political clowns—said that “Ukraine will win” the war.

While we are totally opposed to Russia’s invasion, as we had long noted, and as evidenced by their 77th anniversary Victory Parade yesterday, if Napoleon and Hitler could not defeat the Russians, the comedian playing Ukraine’s president won’t either.

And all the weapons being sent to Ukraine by the West will be responsible for bloodying the killing fields and accelerating the destruction of people's lives, homes and businesses.