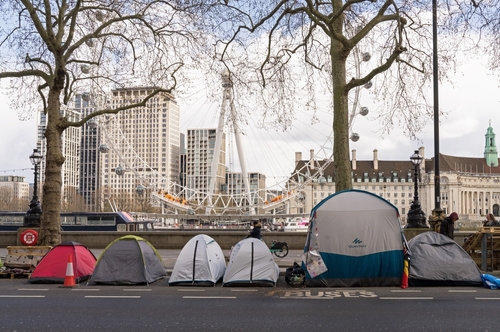 Economic output in Britain stagnated in the second quarter, compared to a 0.3-percent expansion in the first three months of this year.

On 1 July, the U.K. economy was the same size as it was on 1 January, the Financial Times reported.

The economy shrank by 0.6 percent in June, which economists attributed to a two-day work holiday to celebrate Queen Elizabeth’s 70 years on the throne.

Analysts had expected a 0.4-percent rebound in July, but the economy delivered only half that amount of growth.

The service sector grew 0.4 percent in the quarter but was unable to offset a 0.3-percent contraction in manufacturing. Factory output had already shrunk 0.9 percent in June. Construction has seen two consecutive months of sharp decline.

“The disappointingly small rebound in GDP in July suggests that the economy has little momentum and is probably already in recession,” economist Paul Dales at Capital Economics told the FT.

“As things stand, the economy is unlikely to do more than stagnate over the coming year,” Martin Beck, an economist at thinktank EY Item Club, said in an FT interview.

Household energy bills are set to rise 80 percent next as the government raises the limit that utility companies are allowed to charge for electricity and natural gas.

The new limit will hike household energy bills to more than £3,500 a year.

Liz Truss, the U.K.’s new prime minister, has announced a plan to cap the annual cost at just £2,500, which “should help limit the depth of any [economic] downturn over the winter,” James Smith, an economist at ING, said to the FT.

However, “households still face a further decline in their real incomes during the second half of this year,” Beck added.

The Bank of England is widely expected to raise its key interest rate again on 22 September, which will crimp purchasing power even more.

TREND FORECAST: Truss’s aid plan is good politics and will soften households’ financial load. However, it also will free more of consumers’ money to spend on other things, which will put upward pressure on prices and lower the value of the pound which is already at 37 year lows against the U.S. dollar.

As a result, Truss’s plan will put more government money into the economy and work against the Bank of England’s efforts to neutralize inflation by raising interest rates.