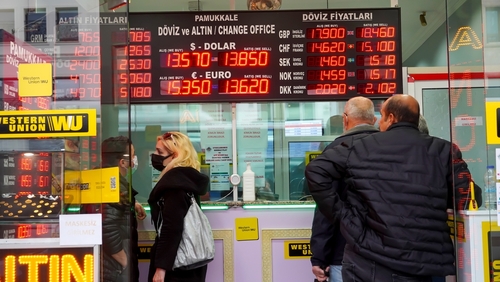 On Monday, 20 December, the value of Turkey’s lira slid to 18 against the dollar, down 13 percent after plunging 5 percent Friday.

The currency cratered after the country’s central bank cut interest rates on 16 December, the fourth cut in as many months as inflation continued to rage at more than 21 percent, although an independent group has placed inflation’s actual pace at 40 percent, as we reported in “Turkey: A Crime to Tell the Economic Truth?” (5 Oct 2021), and another unofficial analysis has pegged the rate at 58 percent.

The lira has given up about 58 percent of its value this year.

The day after the rate cut, the benchmark Borsa 100 index sank 8.5 percent, its worst performance since, which automatically shut down trading twice during the day.

On 20 December, the rout continued. Trading was halted once as prices fell through an automatic trigger that shut down the market in hopes of quelling panic.

The market crash worsened as a wave of margin calls triggered panic selling, according to Yahoo!Finance.

To stanch the lira’s plunge, the central bank released foreign currency into the markets.

It was the fifth time this month the bank has intervened to try to bolster the lira.

In cutting interest rates while inflation soars, the bank is ignoring economic wisdom and experience and is instead following the dictates of strongman president Recep Erdogan, who has staked his personal credibility to his notion that low interest rates reduce inflation.

The cuts are part of an “economic independence war” that is successful, Erdogan declared, citing passages in the Quran condemning usury as further justification for his rate cuts.

Erdogan also is hoping low rates will shore up Turkey’s crumbling economy ahead of the nation’s presidential election next fall.

As part of his personal economic campaign, Erdogan also has announced that he is raising Turkey’s minimum wage by 50 percent, a move that likely will drive inflation harder.

“With this raise, we have proved our determination to prevent our employees being crushed by price increases,” he said in a televised address, adding that “we will not allow [the lira] to crash,” although it already has.

The negative reactions to Erdogan’s economic tinkering were swift and harsh.

The rate cut “is now a deliberate evil,” former central banker Ugur Gurses tweeted, calling it “a shame for our country.”

The lira’s fall had already negated the value of the boost to the minimum wage and reduced the new number by the equivalent of $110 U.S. dollars, said Ahmet Davutoglu, a former prime minister.

“The word for taking $110 out of people’s pockets by pretending to give them 1,425 Turkish lira is ‘stealing’,” he said.

Turks have plundered their savings to pay higher prices for basic necessities. Some Turks had put their money into stocks, believing that equities would fare better in an inflation-driven economy; that expectation was dashed as markets plummeted last week.

The new chapter in Turkey’s financial collapse adds even more pressure to the banking system, which owes loans denominated in foreign currencies equivalent to about 11 percent of the country’s GDP, according to Capital Economics.

The central bank is now thought to have more foreign-currency liabilities than assets, The Wall Street Journal said. “We were astonished to watch the central bank releasing precious foreign currency to the market after it cut rates,” Erdal Bahcivan, chair of Istanbul’s Chamber of Industry tweeted.

UPDATE: Today, in an effort to stop the lira’s slide Turkey’s central bank said it will support the conversion of foreign currency deposit accounts into lira deposit accounts to further encourage reverse dollarization.  In intraday trading today, the lira fell 8.6 percent, they spiked over 18 percent ending up 7.0 percent at 12.230 per dollar.

"In the event that resident real persons, who already had an FX deposit account ... convert their accounts into Turkish lira time deposit accounts will be eligible to benefit from the incentive," the central bank said.

As reported by Reuters, more than half of locals' savings is in foreign currencies and gold, according to central bank data, due to a loss of confidence in the lira after years of depreciation. At its low, the lira was down some 60 percent on the year.

TREND FORECAST: It is not surprising that Erdogan framed his failed policies in warlike terms. As Gerald Celente notes, “when all else fails, they take you to war”—in this case, casting his economic failures as a response to what he will term “hostile outside forces” in hopes of unifying the nation behind him.

It’s not working: Erdogan’s popularity keeps sliding along with stock values and the lira.

Erdogan will not acknowledge the abysmal failure of his policies. He also is unlikely to surrender power, whatever the result of the next election: his 2018 re-election was marked by widespread claims by opponents and independent observers of ballot-stuffing and other forms of corruption.

Turkey will continue to spiral down into economic and political chaos, prompting street demonstrations and, in all probability, violent response from government troops as Erdogan clings ever more desperately to power.

As the global economic recovery decelerates—and as inflation keeps rising across the globe—the lira and Turkey’s economy will continue to decline. Ongoing fears of the Omicron virus will worsen Turkey’s plight; nearly 13 percent of its GDP rests on travel and tourism.