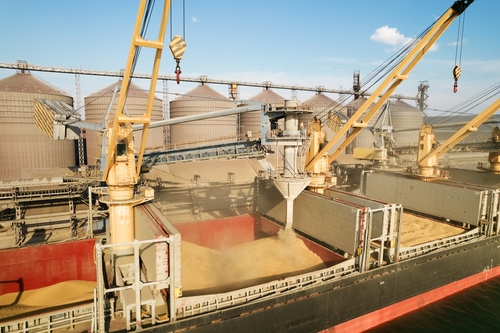 Putin said earlier this month that just seven out of 87 ships hauling 60,000 metric tons of grain were sent to poor countries.

“What we are seeing is another blatant deception,” Putin said at the Eastern Economic Forum in the eastern city of Vladivostok. He called the deal a “swindle.”

"Almost all the grain exported from Ukraine is sent not to the poorest developing countries, but to EU countries," Putin said.

The deal to open the grain exports was negotiated by Turkey and the UN and was seen as the only significant diplomatic breakthrough since the war started in late February. Putin has been accused of using grain as a bargaining chip to force Western countries to ease some sanctions.

The British Defense Ministry, citing UN figures, said that around 30 percent of grain was sent to low and middle-income countries in Africa, the Middle East and Asia. The ministry took to Twitter to accuse Russia of pursuing a deliberate misinformation strategy to deflect blame for food insecurity issues around the globe.

Some analysts believe Erdoğan is attempting to win favor with Russia due to his upcoming election. Ozgur Unluhisarcikli, the Ankara office director of the German Marshall Fund, told The Jerusalem Post that Erdoğan needs investments from Russia.

“Erdogan is going to the election with… a very tight economic situation and he is looking for outside help,” he said. “He wants to insure the Russian assistance in the elections through the economy.”

The report noted that the Russian central bank said last month that it could buy currencies of “friendly countries.” The Turkish lira lost about 44 percent of its value last year and inflation is believed to be at 8.1 percent, but many believe it is much higher.

TREND FORECAST: It is worth noting that Turkey is still holding up the applications for Sweden and Finland to join NATO and tensions between fellow NATO member Greece have been intensifying.

“Any potential aggressor will have to think twice or thrice before trying their luck,” Gen. Constantinos Floros, the head of Greece’s joint chiefs of staff.

The longer the Ukraine War goes on, the weaker the Western coalition will be. We have noted that this winter will be a trying time for most European countries due to an energy crunch. Turkey, for better or worse, is the only country in NATO that has been corresponding with Russians and has the only diplomatic achievement, which we mentioned above.

Erdoğan is a shrewd politician and expect him to use his new-found political importance for a power grab. Greece should be prepared.