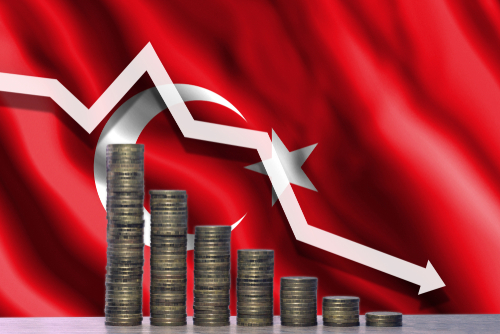 Turkey’s lira has lost almost half its value against the dollar this year and inflation continues its relentless climb, thanks to the economic policies forced on the nation’s central bank by strongman president Recep Erdogan.

He has fired a series of central bank officials who have boosted interest rates or otherwise failed to adhere to his policy directives (“Turkey’s Financial Markets Crash After Agbal Firing,” 30 Mar 2021, and “Turkey: Another Day, Another Central Bankster Fired,” 1 Jun 2021).

The central bank has cut its key rate five times this year, which now rests at 15 percent.

An independent analysis has pegged the rate at about 40 percent, as we reported in “Turkey: A Crime to Tell the Economic Truth?” (5 Oct 2021). More recently, Turkey’s ENAGrup consumer price index pegged the inflation rate at 58.5 percent in November.

When the rate of inflation exceeds benchmark interest rates, investments denominated in the national currency automatically lose value, driving away investors, especially those from other countries.

Turkey’s central bank has almost drained its reserves of foreign currency, selling them to buy lira to soften its decline, leaving the bank with liabilities that exceed its assets.

Partly as a result, Turks are avoiding their own currency.

About 60 percent of bank deposits now are made in foreign currency, Capital Economics’ data shows.

A surge in requests to withdraw dollars—an increasing possibility—could force commercial banks to empty their foreign currency reserves or spur the government to impose controls on bank withdrawals.

Making matters worse, Turkey’s commercial banks have about $83 billion in foreign debt that will come due next 1 September, according to central bank data.

In contrast to Turkey, Brazil, Mexico, and several other emerging economies have raised their interest rates to slow inflation and bolster their economies against a strengthening dollar.

TREND FORECAST: Erdogan’s popularity continues to slide along with Turkey’s economic prospects and the value of its currency.

Erdogan has repeatedly and publicly vowed to keep interest rates low.  Therefore, as a dictator by instinct, he is unlikely to publicly retract or reverse his position.

Because battling external enemies tends to unify a nation and boost an economy through military-related spending, look for Erdogan to seek opportunities for foreign aggression, as he did in Syria.

As Gerald Celente often says, when all else fails, they take you to war.