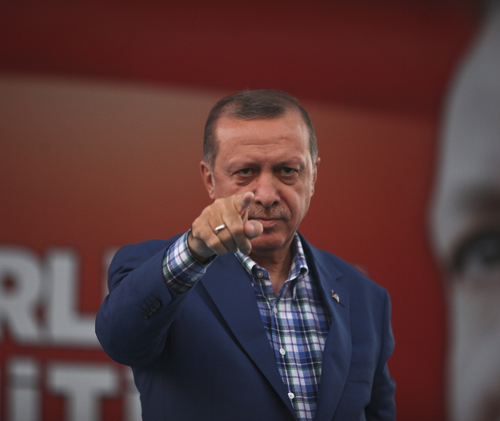 Erdogan has serially fired top bank officials over the past 12 months, most notably bank governor Naci Agbal, who was shown the door last March after he defied Erdogan and raised the central bank’s key interest rate above the rate of inflation.

Erdogan holds to a belief that lower interest rates will not only goose his country’s feeble economy but also will lower inflation, a notion unsupported by economic theory or his own experience.

We have reported on Turkey’s steadily deteriorating economy in articles such as “Turkey’s Financial Markets Crash After Agbal Firing” (30 Mar 2021) and “Turkey: Another Day, Another Central Bankster Fired” (1 Jun 2021).

The latest firings pushed Turkey’s lira to yet another new low against the dollar, dropping it as much as 1.1 percent to reach 9.1550 to the buck. The lira has lost about 20 percent of its value this year, among the worst-performing currencies in the Western world.

The purge was “motivated by an Erdogan irritated because interest rates are not coming down fast enough,” strategist Henrik Gullberg at Coex Partners said in comments quoted by Bloomberg.

Turkey’s official inflation rate was 19.5 percent in September, although independent calculations placed it closer to 40 percent, as we reported in “Turkey: A Crime to Tell the Economic Truth?” (5 Oct 2021).

Turkey’s central bank lowered its base interest rate from 19 to 18 percent on 23 September, bowing to relentless pressure from Erdogan.

“Markets will now expect further easing” when the bank’s policy makers meet on 21 October, he added, raising the likelihood that foreign investors will stay away.

In the week after Agbal was sacked, investors sold $1.1 billion worth of bonds denominated in Turkish currency, the largest short-term sell-off since January 2015, and dumped $800 million in Turkish stocks, the most since 2007.

In total, investors withdrew 40 percent of the money they put into Turkish investments during the four months Agbal was in office, withdrawing more than $5 billion from Turkey’s economy.

TREND FORECAST: As we noted in “Turkey: No Political Opposition Permitted” (23 Mar 2021), the country’s crashing currency and soaring inflation are adding fuel to an increasingly chaotic and unstable Turkish socioeconomic and geopolitical environment.

As the global economic recovery decelerates—and as inflation keeps rising across the globe—the lira and Turkey’s economy will continue to decline. Ongoing fears of the Delta virus will worsen Turkey’s plight; nearly 13 percent of its GDP rests on travel and tourism.

Erdogan’s domestic popularity recently fell to a two-year low and will continue to sink with citizens’ economic prospects.

For that reason, look for Erdogan to become more belligerent in his comments and actions directed at foreign “enemies.”  Remember, as Gerald Celente has noted, “When all else fails, they take you to war.”