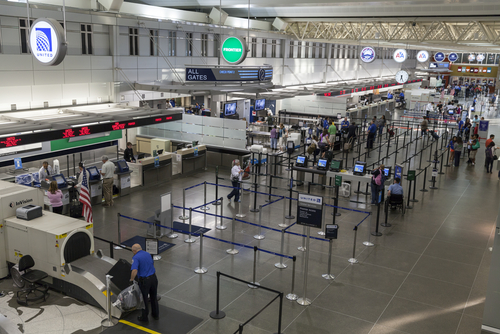 To the various occupational groups—truck drivers, police and firefighters, airline pilots, healthcare workers—of which significant numbers of workers are choosing to remain unvaccinated against COVID-19, Transportation Security Administration employees can now be added.

As reported on 17 November by Bloomberg News, as many as 40 percent of U.S. airport security screeners were still unvaccinated, and it was unlikely that would change by the deadline for compliance, 22 November; see "MAJORITY OF AMERICANS WOULD QUIT THEIR JOBS THAN TAKE THE JAB. WILL THEY BACK DOWN?" (14 Sep 2021).

Neither the agency nor the union representing the workers is reported as being concerned about travel disruptions over Thanksgiving caused by staffing shortages.

That might imply that the agency will not be taking "a hard line," and will not be summarily dismissing non-vaccine-compliant workers. Were the agency to dismiss that many workers, that could play havoc with Christmas travel as well. But, under the federal vaccine mandate, agencies are instructed to provide "education and counseling" before termination, so workers who miss the deadline (and don't obtain medical or religious exemptions) are unlikely to be fired immediately.

The TSA is reported to have just completed a hiring surge, and that may help account for the agency's belief that it will be fully staffed for holiday travel. In addition, forecasts of numbers of people traveling show more than last year but are still well below pre-COVID figures.

In addition to concerns over staffing and travel disruptions are concerns about unvaxxed TSA workers transmitting COVID-19 to travelers, since screening, by its nature, involves close contact. The agency reports that more than 11,000 of its employees have been infected since COVID-19 first appeared, with 32 deaths; there are currently 271 active cases.

A TSA spokesperson is quoted as saying that the deadline is "not so much a cliff, but a step to further counsel any unvaccinated employees," adding that "We've lost too many TSA employees...and the vaccines are the best way to protect our workforce and our communities."

TREND FORECAST: We note this article to illustrate the fact that despite the media and politicians selling the lines that only right wing conspiracy theorists are opposed to getting the Operation Warp Speed gene therapy inoculation, the dissent to get the jab is not politically oriented. Moreover, it further illustrates the depth and scope of those unwilling to get the jab and how it will prove to be a strong foundation for a new anti-establishment “Freedom” movement.