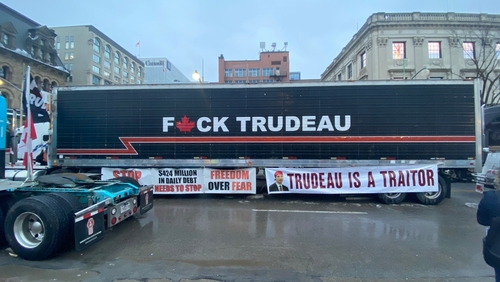 Canadian Prime Minister Justin Trudeau announced Monday that he invoked the country’s Emergencies Act, which would enable his government to override provincial powers as the "Freedom Convoy" protests entered a third week in Ottawa.

The move allows Trudeau to use new measures to break up the protests that were launched by truckers who are fighting against government mandates that force them to get the Operation Warp Speed inoculation when crossing the U.S. border.

Calling the Freedom Convoy illegal and “dangerous,” Trudeau told them, “The time to go home is now.”

Trudeau, under the Emergencies Act, is allowed to do what he believes is needed in order to regain control of the protest—and even ban assemblies in certain areas. The Prime Minister insisted that the emergency order, which still needs to be approved by the Canadian Parliament, will not result in a loss of “fundamental rights.”

Trudeau’s government threatened to tow away vehicles, freeze truckers' personal and corporate bank accounts, and suspend the insurance on their rigs, The Associated Press reported.

Canada was not facing the kind of public emergency the act had been designed to tackle, Leah West, a professor and national security expert at Ottawa's Carleton University, said, according to Reuters.

"I'm kind of shocked to be honest that the government of Canada still actually believes that this meets the definition to even invoke the act," she told the Canadian Broadcasting Corp.

Nelson Wiseman, a professor emeritus at University of Toronto, said, "What's striking about this time is we've had no violence, nothing like that."

Reuters reported that civil liberties groups in Canada have come out against Trudeau for invoking the Act and cutting off the Freedom Convoy’s funding.

Among them, The Canadian Civil Liberties Association said the truckers’ protests did not meet the standard for invoking the Emergencies Act, which exists for "the ability of the Government of Canada to preserve the sovereignty, security and territorial integrity of Canada" and only for actions that "cannot be effectively dealt with under any other law of Canada."

Trudeau has faced criticism from every quarter. The truckers blame him for his cowardice while those opposed to the truckers say he has been too lenient.

The mayor warned that the protests could lead to “someone” getting killed. Government officials have faced renewed criticism over lockdowns and mask mandates due to the lack of scientific evidence that they benefited society.

Tamara Lich, one of the protest organizers in Ottawa, promised not to back down.

“There are no threats that will frighten us. We will hold the line,” she said, according to the AP.

“He’s got protests right around the country, and now he’s dropping in the polls, desperately trying to save his political career. The solution is staring him in the face,” he said.

Canada also announced that it will broaden the scope of its anti-money laundering and terrorist financing rules to include crowdfunding platforms after millions in donations were directed towards these protesters, Reuters reported.

"We are making these changes because we know that these platforms are being used to support illegal blockades and illegal activity which is damaging the Canadian economy," Finance Minister Chrystia Freeland said.

The City Journal reported that there is no “convincing evidence” that strict lockdowns reduced the number of COVID-19 deaths. The report said there has been a significant jump in excess mortality for young and middle-aged individuals not attributed to the virus.

The report said some of those deaths point to “obvious lockdown-related factors." The report said that researchers said lockdowns can lead to tens of thousands of “deaths of despair,” which include drug overdoses, alcoholism, and suicide.

“Lockdowns have protected the laptop class of young low-risk journalists, scientists, teachers, politicians, and lawyers, while throwing children, the working class, and high risk older people under the bus,” Martin Kulldorff, a professor at Harvard Medical School, told the paper.

The protesters in Ottawa arrived in the city on 28 January and have been ordered to stand down or face possible arrest and fines up to $100,000.

The Times reported that Canadian police cleared the Ambassador Bridge in Windsor, Ontario, which is a major trade route to the U.S. The paper said the protesters at the bridge were complying and exchanging fist bumps with officers—who were not issuing tickets.

“They’ve taken an oath to protect our country,” one protester told the paper. “A civil servant will not go against watching people being unified.”

Peter Sloly, Ottawa’s police chief, called the demonstration “sophisticated.” There are about 500 trucks in the city that is under a state of emergency.

“They have the capability to run a strong organization here, provincially and nationally, and we’re seeing that play out in real time,” he said.

The protests began with calls for the government to end vaccine mandates for truck drivers who drive into the U.S., but now include calls for the entire country to end restrictions and Trudeau to be removed from office.

“Canadians have been missing national leadership during this crisis,” Jagmeet Singh, the leader of the New Democratic Party, said, according to the BBC. (WATCH: GERALD CELENTE CALLS TRUCKER PROTEST A MEGA TREND FOR FREEDOM.)

Trudeau once called the Freedom Convoy a “small fringe minority” but has now faced pressure from both sides of the vaccine debate. Some Canadians say he has been slow to respond to the protests, which allowed it to take hold of the city.

Stewart Prest, a political scientist at Simon Fraser University, told the network that the protests seem to be “almost a Primal Scream of rage, frustration” after two years of outbreak restrictions.

TREND FORECAST: Confirming our forecast of the power of the Canadian Trucker’s Freedom Convoy, a majority of Canadians now say they want COVID restrictions lifted, according to an Angus Reid poll.

This a sharp increase from when the same question was asked in early January.

Should other nation’s truckers launch Freedom Convoys of this magnitude, people power will force politicians to end many COVID War restrictions. There are reports convoys will be launched in the U.S. and have already begun in some European nations and in Australia.

We most recently saw this truth demonstrated in November when Indian Prime Minister Narendra Modi on Friday said lawmakers would repeal the agricultural laws that farmers in the country feared would leave them in financial ruin. (See “MODI LOSES, FARMERS WIN. A MEGA-TREND BEYOND INDIA.”)

And as we noted in the Trends Journal last week, Serbia's government reversed the controversial Rio Tinto lithium mine that was planned for the western part of the country after weeks of massive protests claiming that the mine would lead to environmental ruin for neighboring towns. As we have been reporting, week after week, month after month thousands of demonstrators took to the streets blocking main roads and bridges used to access the mine site near Loznica.