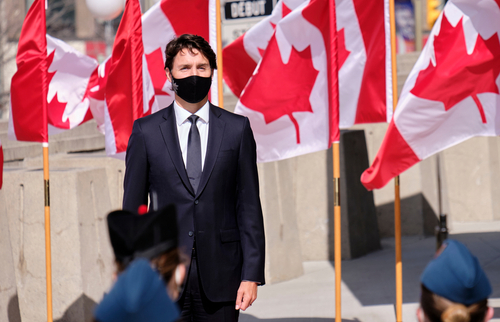 Canadian Prime Minister Justin Trudeau announced last Wednesday that the country is no longer in an “emergency situation” and he would revoke the extraordinary emergency powers that he imposed to deal with the Freedom Convoy protest in Ottawa.

“Order has been restored and the blockades and occupation are over,” Trudeau announced. Parliament declined to revoke the powers.

The Trends Journal reported extensively on the protests and the effort that Trudeau made to smear the truckers to delegitimize the protest (which the media was more than happy to promote). (See “CANADIAN CIVIL LIBERTIES ASSOCIATION SUES TRUDEAU GOV’T,” “TRUDEAU, STILL IN HIDING, INVOKES RARELY USED EMERGENCY ACT” and “CANADIAN TRUCKERS FREEDOM CONVOY: MEGATREND DEFAMED BY MAINSTREAM MEDIA LIES.”)

Trudeau’s decision to enforce the Emergencies Act gave his government the ability to cut off funding for these demonstrators and freeze their bank accounts.

Trudeau faced backlash over his crackdown against the truckers. We reported last week that the Canadian Civil Liberties Association sued Trudeau and his government after calling the emergency orders “an extreme law that has never been used.”

“Through all the peaceful and disruptive protests in Canada's history—some involving unlawful acts and protracted standoffs with police—never before has a government declared a national emergency under the Emergencies Act, and with that given itself the enormous powers to bypass the ordinary, accountable democratic process,” a statement read.

Daddy’s boy Trudeau followed in his father’s footsteps by declaring the emergency. Pierre Trudeau, the former prime minister, invoked the same emergency order during a terrorism crisis in Quebec. (His father’s order—which was known at the time as the War Measures Act—came after the Quebec Liberation Front set off 200 bombs and killed the deputy prime minister of Quebec. Daddy Trudeau was accused of exaggerating the threat in order to pass the orders.)

Justin Trudeau said police in the city managed to shut down the protest and “order has been restored and the blockades and occupation are over.”

Video of law enforcement emerged on social media and showed a wave of cops moving in on the protesters 22 days after the protest started. The New York Times described “rows of police officers” sweeping through the crowd who were tailed by “at least two armored vehicles and tactical officers armed with rifles and wearing helmets.

David Paisley, a HVAC technician who would broadcast updates from the protest, told the paper that one of the police officers pointed a “big military rifle” at his chest and ordered him down on the ground.

Trudeau, citing intelligence from law enforcement, said there is a risk that another trucker convoy could enter Ottawa so his government would enact the same measures in response.

“The state of emergency is not over,” he said.

It is worth noting that Justin Trudeau, in 2020, called out New Delhi over its response to the farmers' protest, saying that Canada “will always be there to defend the right of peaceful protest.” (See “MODI LOSES, FARMERS WIN. A MEGA-TREND BEYOND INDIA.”)

Under the new powers, tens of thousands of Canadians as “designated persons” who could have their bank accounts and other assets frozen, The Wall Street Journal reported.

“We took measures that had been applied to terrorism and applied them to other illegal activity,” Justice Minister David Lametti said.

The paper’s editorial board pointed out that police in the country already had the ability to clear the protesters who had been blocking traffic with tow trucks. The move to freeze their assets served “not to end an emergency but to incapacitate and intimidate protesters after the fact.”

TREND FORECAST: Justin Trudeau's actions against the Freedom Convoy should send chills through every Western country. He showed that the only protests that are permissible are the ones that are approved by the state.

We see Trudeau's actions being embraced by Washington and the reach will not be isolated to drivers in big rigs who honk their horns. What is to prevent the government from seizing bank accounts of anyone who posts an opinion online that is not approved by the government?

The government is supposed to represent the people, but Trudeau refused to even listen to the protesters' grievances before releasing the thugs from the Ottawa Police Department to violently remove the few that remained.

Trudeau—who was in hiding during most of the protest due to his COVID-19 infection—despite being three-time-vaxxed... managed to recover from the virus, but his political career has suffered a tremendous blow.