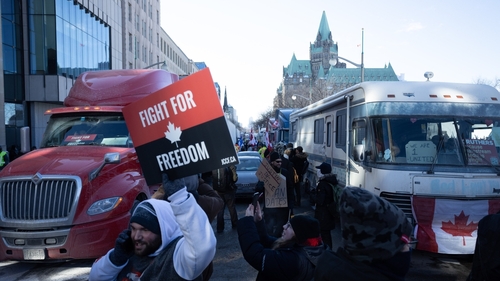 Inspired by the massive Canadian trucker’s Freedom Convoy, launched in protest of draconian COVID War dictates imposed upon them by politicians, thousands of truck drivers in the U.S. are planning an Ottawa-style protest for Washington, D.C., to voice their opposition to COVID-19 mandates.

Portrayed by Presstitutes, media whores who get paid to put out for the corporate pimps and government whoremasters, they have been portrayed by the mainstream media as “the far right.”

The attempt to tie this protest and others to these groups is deliberate and meant to degrade these legitimate movements as though they are essentially glorified KKK rallies. Gerald Celente, has spoken about this tactic and watched it play out in Canada.

Prime Minister Justin Trudeau, the little Daddy’s boy who has gone in hiding since the trucker’s peaceful Freedom Convoy came to the nation’s capital, Ottawa, demeaned the protesters as a “minority“ of “racists” intent on desecrating war memorials in the city.

Of course, any racism is reprehensible, but—so far—Ottawa police have 13 “open investigations” and released one image of a woman allegedly dancing on the city’s National War Memorial.

TRENDPOST: The New York Times, the self-proclaimed “Paper of Record,” which Gerald Celente says is more accurately the “Toilet Paper of Record,” spewed out the same Trudeau crap last night.

Following the mayor of Ottawa declaring a State of Emergency, the Times, totally discounting the tens of thousands of people peacefully taking to the streets, in Ottawa, Quebec, Alberta, Manitoba, British Columbia, Saskatchewan and Toronto said, “The demonstrations, during which some protesters have desecrated national memorials and threatened local residents, have shaken a country known globally as a model for humanism and serenity.”

One, two, three people out of tens of thousands?

And who were they, agents provocateurs?

This is not journalism; it is demeaning, destructive, Presstitute propaganda.

And labeling Canada a country that is a “model for humanism and serenity?”

What “humanism” model of “serenity” murderous wars did the Toilet Paper forget that the Canadians marched and murdered in... Besides slaughtering their indigenous population?

Forgetting the past few hundred years and starting in the 20th century, was it the World War I slaughter; no possibly their “humanism” involvement in the Russian Civil War; or could be the Korean War massacre, the Congo murders, the Persian Gulf War, the Afghan War, the Iraq War, the Somali Civil War, Bosnian War, Kosovo War, Libyan War?

Canada is just another nation ruled by sociopaths, psychopaths and pathological liars.

On the COVID War front, numerous times the nation was locked down by politicians who destroyed the lives and livelihoods of tens of millions of civilians despite the fact that COVID victims that died from the virus were predominantly elderly with pre-existing comorbidities.

Again, these facts are never reported by the mainstream media who instead support the politicians in charge and demean citizens that put their lives on the line for Freedom, Peace and Justice. (See “CANADA: ‘HEIL VAX’ NO FREEDOM FOR UNVAXXED,” “60 PERCENT OF CANADA’S RESTAURANTS MAY FAIL” and “CANADA; LOCKDOWN LUNACY, GESTAPO 2.0.”)

And keeping with the Gestapo way of life in the 21st century, big-tech, GoFundMe—selling the Trudeau and Presstitutes propaganda that the Canadian protests were violent and racist—said they would not give the $10 million they received from people supporting the Freedom Convoy, and would give to other organizations.

While barely reported in the American media, in the U.K. The Guardian reported that “Convoy to DC 2022” has already gained 100,000 members and will take place next month.

The report also pointed out that Meta Platforms, the parent company of Facebook, removed the group’s page for “repeatedly violating our policies around QAnon.” (See “FREEDOM OF SPEECH IS UNDER ATTACK AS ONLINE CENSORSHIP INCREASES.”)

Last week, the Trends Journal reported on the Canadian trucker freedom convoy and identified it as a “Megatrend.” We pointed out that the media sells fear and hatred around people who want to provide for their families and not be forced to inject something that they do not want into their bodies.

Celente called the truck convoy the opening salvo in the West’s freedom-from-vaccine movement. He said the truckers cannot back down if they want to achieve their goals. He said they must tell the media that this is a PEACEFUL protest, and that any violence "will be that of the Trudeau Mob…agents provocateurs."

The American truckers laughed off the insinuation that they are a bunch of QAnon following racists. The group moved to Telegram and acquired 28,000 followers.

“None of us are QAnon supporters or followers or anything like that. We didn't even have anything like that posted on our personal pages,” Jeremy Johnson, an organizer, said. He told Fox News that “they like to silence people who tell the truth.”

Liz Peek, the conservative columnist, wrote in The Hill that the American truckers have already been portrayed “by the liberal media as right-wing zealots and science deniers, which is only one notch above climate deniers.”

She said President Biden was elected by appealing to the so-called “little guy.” She said the White House has to strike a delicate balance and cannot go the route of Trudeau who called his protest a “fringe minority.”

“They could, if pushed, call for a sick-out of America's vital truckers,” she wrote. “Whatever supply chain problems we have had would pale before the catastrophe that could unfold if tens of thousands of drivers simply walked off the job for a day or two. Imagine what would happen to transportation costs, and inflation.”

We most recently saw this truth demonstrated in November when Indian Prime Minister Narendra Modi said lawmakers would repeal the agricultural laws that farmers in the country feared would leave them in financial ruin. (See “MODI LOSES, FARMERS WIN. A MEGA-TREND BEYOND INDIA.”)

And as we noted in the Trends Journal last week, Serbia's government reversed the controversial Rio Tinto lithium mine that was planned for the western part of the country after weeks of massive protests claiming that the mine would lead to environmental ruin for neighboring towns.

As we have been reporting, week after week, month after month thousands of demonstrators took to the streets blocking main roads and bridges used to access the mine site near Loznica.

These protesters, as with the current Freedom Convoy in Canada, also faced an intimidation campaign by authorities and police brutality.

“We are not afraid of Rio Tinto,” Ana Brnabić, the Serbian prime minister, said, according to the report. “We are here for our people and our country. They can do whatever they think they should do. This is the final decision of the government of the Republic of Serbia.”