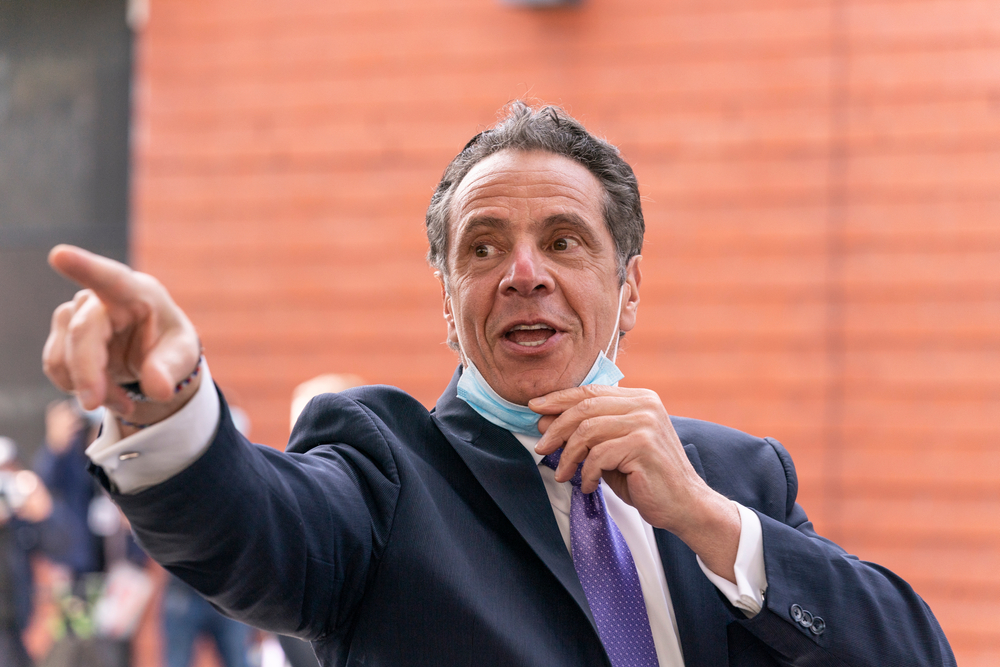 On Tuesday 15 June, the governors of New York and California, the two states that have racked up the highest COVID-19 death tolls (53,000 and 63,000, respectively) made separate announcements declaring milestones reached in each state's vaccination program and the lifting of most restrictions on business and social gatherings.

A New York Times article appearing 16 June reports that Governors Gavin Newsom of California and Andrew Cuomo of New York, whom the NYT observes are "both Democrats who are facing political difficulties," made their announcements amid great pomp and fanfare "at events that seemed more like rallies than news conferences."

Both governors no doubt feel that their states' return to pre-COVID War conditions will help rehabilitate their approval ratings. Cuomo, as we've noted in several articles, such as on 9 March 2021, "ANOTHER DAY, ANOTHER CHARGE OF CUOMO HARASSMENT," has been accused of inappropriate behavior and, as we've also reported in several articles, such as on 25 May, "CUOMO'S BOOK A BUST, BUT GOT PAID MILLIONS," faces criticism and calls for resignation over his profiting from his self-praising book about his handling of the crisis, and for his allegedly negligent handling of nursing home COVID cases that resulted in so many deaths.

And Newsom faces a recall movement for his handling of the crisis, although his media allies are hard at work protecting him, as we reported on 25 May, "MSM CONTINUES TO SMEAR THOSE OPPOSED TO 'OFFICIAL' NARRATIVE."

As we have been reporting, America’s so-called top infectious disease expert, Anthony Fauci, told Americans that “I would say 75 to 85 percent would have to get vaccinated if you want to have that blanket of herd immunity."

Yet, Cuomo and Newsom both said that the biggest factor in this "re-opening" is each state having met its self-declared threshold of adult vaccinations; in NY, 70 percent of adult residents have received at least one dose, while in California that figure is 72 percent.

But that is only one shot. In New York State, 52 percent have received two COVID jabs and only 48 percent got the double dose in California. Thus, it is total made-up Cuomo/Newsom bullshit that the reason the states decided to open up was because of a 70 percent vaccination rate. And it should also be noted that numbers are not evenly-distributed within those states; in NYC's boroughs of Brooklyn and The Bronx for example, the full-vaccination rates are just 41 and 38 percent, respectively. Similarly, some of California's most populated counties still have less than 40 percent of adults fully vaccinated.

Limits on spacing and capacity in restaurants and movie theaters have been lifted in both states, as have social distancing and mask-wearing requirements, although businesses may choose to keep such practices in place, "in order to allow their clientele and workers to feel safe." The states will still abide, however, to the Centers for Disease Control advisory that unvaccinated persons should maintain social distancing and wear masks indoors. And restrictions may remain in place in correctional and healthcare settings, on public transit, and in schools and homeless shelters.

TRENDPOST: As for the homeless, we have continually detailed, if COVID-19 was as deadly as the media and politicians keep promoting, how come the homeless have not filled up hospital beds and why have they not died en masse from the virus?

Why, because as the data proves, the aged that are ready to die and those who have 2.6 pre-existing comorbidities are the virus victims... yet entire nations have been locked down and billions of lives and livelihoods destroyed.

And, as we have also reported, the COVID death numbers are cooked. If, for example, someone fell off a ladder and broke their neck and died, if the test results showed the person had the virus, that is what is listed as the cause of death.